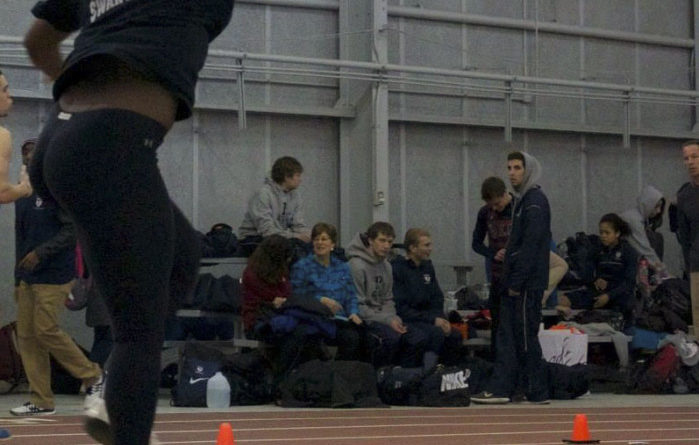 Osazenoriuwa Ebose ’15 is a woman with an incredible sense of determination, an incredible aura of positive energy and, last but not least, an incredible arm. Holding both of Swarthmore’s indoor/outdoor shot put records as well as the outdoor discus record, Ebose has made her mark in Swarthmore’s history. But with a steadfast dedication to outdoing herself, she’s clearly not done yet.

After I continuously pried for details about her athletic achievements at Swarthmore, Ebose finally caved and admitted, “I do hold records here, but I think for it to be a record that I’m proud of, it needs to be lasting and difficult for people to break.” Constantly in an effort to better herself and her athletic abilities, Ebose’s modest answer to an astounding accomplishment only begins to illuminate her resolve to do and be the best.

As a member of both the indoor and outdoor track teams, her season is basically year-round. Indoor track begins in November but preseason starts in early September. “From the moment I come back on campus I’m usually training every day,” she said.

But this constant immersion in all things track and field is anything but new to Ebose. As a part of track and field teams since seventh grade, Ebose has been accustomed to practice being an integral part of her daily routine. Emphasizing the importance of going to practice every day, Ebose commented, “Practice gives structure to my life. It lets me know that I’m putting my body through a rigorous test in order to work and strive toward something great.”

However, the throws have not always been at the forefront of her track and field career. Throughout her middle school and the beginning of her high school career, Ebose trained for short distance running. But eventually during her junior year in high school, she discovered her love and talent for throwing and has stuck with the event ever since.

Nonetheless, as a high performance athlete, running still remains a part of her daily workout routine along with lifting weights. In addition to her 50-meter sprints in the gym, Ebose incorporates Olympic lifts such as benches, squats, hang cleans and deadlifts. “The lifts are all about being explosive, quick, fast and strong,” she explained. And because she’s been lifting almost every day since high school, Ebose possesses so much strength that even Popeye would be proud.

The gym is only one part of her workout. Most of her time is spent perfecting her form for both shot put and discus. This quest for perfection requires an immense amount of repetition. “I practice throwing one or both events each day,” she explained, “and in order to do this, I break down the full throw.” By breaking down each throw into its successive parts and repeating each section at least 10 times with both men and women’s weights, Ebose focuses on her footwork and perfecting her overall form.

However, these practices come with unfortunate consequences. Especially during indoor track, Ebose often has to practice alone because of the limited number of throwers on the team. In fact, for the past three years, Ebose has competed completely alone in the indoor shot put. Not only has she had to endure the difficulties of practices during the fall without a teammate, she has also had to endure these difficulties without a coach.

“It’s very hard to practice without teammates or a coach,” Ebose began, “There are so many parts of the shot that are technical, and practicing by yourself gets frustrating at times because you can only do and see so much alone.”

For the past three years, her practices have been separate from the rest of the team and have often ended late, forcing her to miss team dinners and lose opportunities to hang out with the team as a whole. “During practices sometimes it’s really frustrating knowing the rest of the team has each other and I kind of just have myself,” Ebose recalled, reflecting on the feelings of isolation associated with her practices. “It’s not that they aren’t there for me, it’s just that they aren’t able to practice with me and it gets a little difficult,” she said.

Julia Nee ’15, a fellow track teammate, also acknowledged the team’s separation from Ebose and its effect on her. “Because of the coaching situation, [Ebose] wasn’t always practicing at the same time as us and I know that frustrates her,” Nee said.

In addition to practices, meets also create a difficult environment for the team to offer their full support. “Field events in general, and throws in particular, are usually situated pretty far from the track, so it’s difficult to support her at meets too.” Nee continued, “We’re all aware of it and we know it’s hard for her.”

Despite her frequent separation from the rest of the team, Ebose remains strong and confident about her place on the team. “I’ve had a lot of realizations about feeling like a part of the team and feeling accepted,” Ebose began, “But I know now that just because people aren’t always necessarily visible doesn’t mean that they’re not supporting me in other ways.”

Nee commended Ebose’s positive attitude and stated, “I think her ability to succeed without all the support some of the runners get is pretty amazing.”

Chelsea Hicks ’14, one of Ebose’s closest friends, echoed Nee’s admiration for Ebose and said, “[Ebose] is continually outgoing and always willing to look at the glass half-full rather than half-empty. She is not one to ever complain about her workload or responsibilities, especially given the fact that she’s involved in just about everything.”

With her involvement as a co-captain of the track and field team, a member of Kappa Alpha Theta, Rhythm n Motion, TOPSoccer, Swarthmore African-American Student Society, Orientation Committee, Student-Athlete Advisory Committee, Student Activities Committee, and as a waitress at Paces Café among other things, Ebose has made a name for herself on and off the field. But just as her accomplishments span from the athletic to the academic realm, so does her modesty.

“[Ebose] is very modest about her accomplishments because she has such an incredible drive to always do better,” Nee explained. “So even at a meet, where she sets a personal record or even a school record, if you ask her how she did she’ll just say she did okay because she doesn’t want to brag and she knows she can do better.”

When asked what her greatest accomplishment was, Ebose began, “I think I haven’t achieved my greatest accomplishment yet,” and after pausing for a moment, finished with, “but I’m really proud of my team.” By placing an emphasis on the team’s fantastic performance last semester (2nd place at conferences) and attempting to trivialize her own admirable performance, Ebose illustrates her humble personality and incredible conviction to constantly outdo herself and create a lasting legacy.

Ebose’s goals of becoming an All-American athlete and qualifying for nationals seem, given her determination, completely reachable, to say the least. A strong, passionate and highly-involved woman, Ebose and her resolve to succeed serve as an inspiration for the over-achieving Swarthmore student.

So Swatties take note: Ebose may already have 3 records and a boatload of extra-curriculars under her belt, but her incredible amount of persistence can assure you that she’s definitely not done yet.