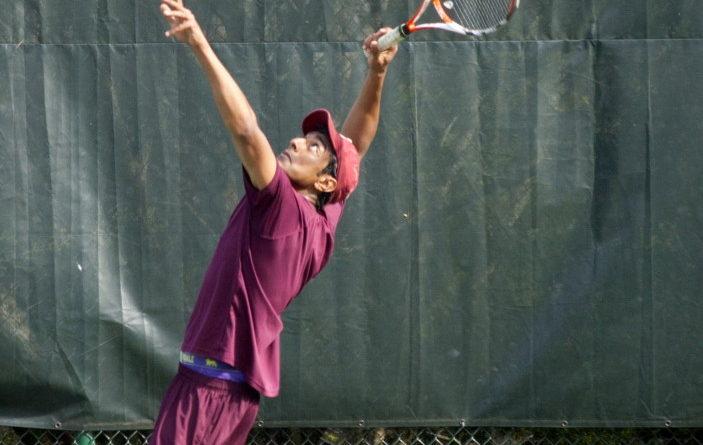 This past Saturday, the Men’s Tennis team faced the Division I school, University of Delaware, and victoriously showed those DI kids what our DIII men can do. Winning the No. 2 and No. 3 doubles matches as well as 5 out of 6 singles matches, Swarthmore defeated Delaware, earning a whopping 6-1 victory.

Although this match served as the team’s first in-season match, the meet does not count toward their actual DIII season rankings. Scheduled by coach Mike Mullan, this meet was meant to serve as a warm up to their first official season game against Stevens, scheduled for this Saturday. But with their impressive defeat of Delaware, the men’s performance shows promising signs that this season will be one to remember.

“Delaware played really well, but I don’t think they were expecting us to have such a high performance,” Max Kaye ’14 commented.

Kaye, who won the No. 2 singles match for his team with a score of 6-0, 6-1, emphasized the importance of going into a meet with a focused mindset and positive attitude, saying, “We came out strong, focused, and were able to play really well as a team. We’ve been training all year for this season and I really think Delaware just didn’t know what to expect.”

Before beginning their meet, Mullan invited the team to his house for a pre-match breakfast. Amidst bagels and fruit salad, Mullan delivered a motivational speech to the team that amped them up for their impending match. “Getting up and going to Coach Mullan’s house for breakfast was a great way to start the first day of the season,” said John Larkin ’17. “But before the match actually started and any of our players had gone on, I was really nervous.”

Fellow freshman Thomas Vernier also voiced his feelings of anxiety before Saturday’s match. “I was extremely nervous during warm up and even during breakfast I had trouble getting myself to eat,” he said.

But despite the disquieting suspense of the pre-game jitters, both Vernier and Larkin proved their worth in their first career matches. Vernier and his doubles partner Anthony Collard ’14 managed to win their doubles match by a final score of 6-3. “Since Anthony and I got the first win of the day, it felt like we got the momentum going for everyone else,” Vernier reflected. “I came out serving well right away, Anthony was playing well, and once we were up a break I couldn’t have felt more comfortable.”

In addition, the seniors reflected on the importance of the freshmen and their performance in their first season’s match. “I think we were all looking forward to seeing how the freshmen would perform under pressure, and they really exceeded expectations.” Collard said. “Thomas played extremely well in doubles with me, and Larkin played a huge role by getting the win for us.”

Larkin, who ultimately clinched the win for the Garnet with his 6-2, 6-1 victory in his No. 4 singles match, reflected on the intensity of playing in his first season match for Swarthmore. “Watching Thomas and Anthony play doubles and get our first win of the day was an absolute rush. It really set the mood for the entire match,” he said. “When I won and clinched the match for the team, it was honestly one of the best feelings I’ve had on the court.”

The roar of Larkin’s teammates as well as the cheers from spectators echoed throughout the Mullan Tennis Center as they swarmed down onto the court and congratulated him on his win. “There is nothing quite like playing and having the team supporting you. When you win a big point and the team goes crazy behind you, it feels absolutely amazing,” Larkin said.

“The crowd was unreal,” Vernier added. “Everyone that took the time out of their day to come out was crucial. Having that support was surreal.”

Although their win on Saturday was exciting, the team emphasized that they wouldn’t let it get to their heads. When asked how their decisive win against Delaware will affect players’ attitudes for the rest of the season, Kaye commented that it has pumped them up for the rest of their season, but they know what challenges lie ahead. “Our goals are to make it to the NCAA championship and we know we have a long road ahead of us,” Kaye said.

“Beating a Division I team is huge,” Collard added. “But it doesn’t matter. We’re looking forward to our next matches and working our way toward the NCAA championship.” Despite the impending difficult matches against teams ranked at the top of the country, the men remain positive and optimistic about their future performance.

“We’re all really excited for this season,” Kaye continued. “One of the strongest aspects about our team is its depth. We have at least 10 qualified people who could easily be in the top 6.”

“The guys who play 1-6 play at similar levels on any given day,” Collard added. “Any one of the lineup can beat each other and that’s something that makes us feel very confident about our team’s capabilities.”

In addition, the team’s doubles point win on Saturday served as positive indication that what was originally one of the weaker aspects about their team may now be turning into a strength. “Historically, singles matches have been better than our doubles matches,” noted Christian Carcione ’14. “But our win from this Saturday is a good omen that this year our doubles will also be a strong point for our team.”

Furthermore, the strong leadership from the team’s upperclassmen helps build a solid foundation that the underclassmen can rely on. “The seniors really lead us by example,” Larkin explained. “They work hard during practices and play hard during matches, so we have no excuse to not do so as well.”

With the impressive skill of each of its individual players and their strong sense of team chemistry, the Men’s Tennis team is prepared for the challenges that lie ahead. Hold off studying for that midterm and clear your calendars for the team’s first match against a DIII opponent, Stevens University, this Saturday at 12:00pm. If their win against Division I University of Delaware wasn’t exciting enough, worry not. As Larkin aptly put it, “The best part of this season is that we’re just getting started.”