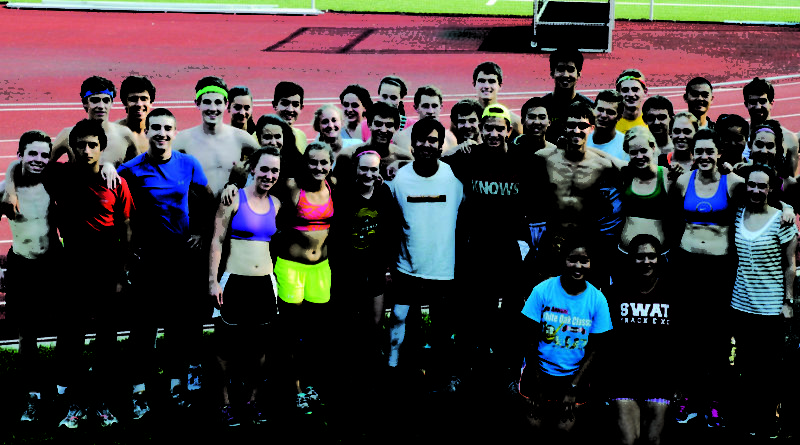 Imagine running 75 miles in a week. Now imagine doing that every week for the entire school year. Although this seems like a cruel form of punishment to most, the Swarthmore cross country/track team runs this heavy mileage all year round and likes it.

Immediately after their season ends in November, almost all cross country runners on the team shift over to track. In other words, “off-season” doesn’t exist. This creates a never ending cycle of long distance running, giving these year-round athletes the opportunity to create a quirky, fun-loving, and welcoming environment.

“Right from the start I felt accepted,” John Gagnon ’17 said. After getting the chance to bond with the team during summer practices, John realized how friendly the team was and how willing they were to make him feel like a part of the family. “They put candy on my door with quotes and pictures,” said John. “I thought it was really thoughtful.” Kate Crowley ’16, another year-rounder, had a similar experience meeting the team. “They were the first group of people I met in college, so even before orientation started, I already felt like I had a group of people I belonged to,” she said.

In addition to welcoming freshmen during their first couple of days at Swarthmore, the team continues to build their relationships off the track. “We spend a lot of time together,” co-captain Richard Scott ’14 said. On a typical Sunday night you’ll find the year round athletes sitting in one of the private rooms at sharples, cracking jokes and laughing with one another. “We eat together every Sunday night, but we also eat together during pretty much every meal. A lot of people think of us as a cult but we’re not! We’re just a really close family,” he said.

In addition to bonding outside of athletics, the team spends countless hours running alongside one another every day of the week. With practices including Saturday races, Sunday long runs, and a combination of high intensity maintenance workouts throughout the week, it’s no surprise that the team is able to form such strong bonds so quickly. But participating in a year-round sport brings more than just close friendships. It also forces its athletes to constantly be in shape and to train and workout consistently. “I think part of the virtue of being an all year athlete is that we keep up with the maintenance that we need to do.” Richard adds, “If I had an off season, I wouldn’t be stretching or icing or doing whatever I need to do to keep me healthy. So because I’m in season all the time, I’m making sure I’m checking up on things like tendonitis or changing my shoes more frequently once they’re worn out.”

Scott has been on the team for his entire college career and he couldn’t be happier to run for Swarthmore. “It’s an exciting time to be a part of our team,” he said. “We are the only sport at Swat who consistently sends someone to their national championship. And I’m very proud to be a part of that tradition.” In addition, the team has undergone some major improvements since Richard first started running on the team. During his freshman year, the Swarthmore cross country team was in 17th place. “But throughout the past couple of years, we’ve really seen the program grow,” he said. “Last year we were in 7th place and we’re going to stay in 7th place or do even better.”

*** Trigger Warning: There is mention of genocide and violence against indigenous peoples.  In a virtual Q&A Session followed by

October 22, 2020 Sofia Frumkin 0
Do NOT follow this link or you will be banned from the site!