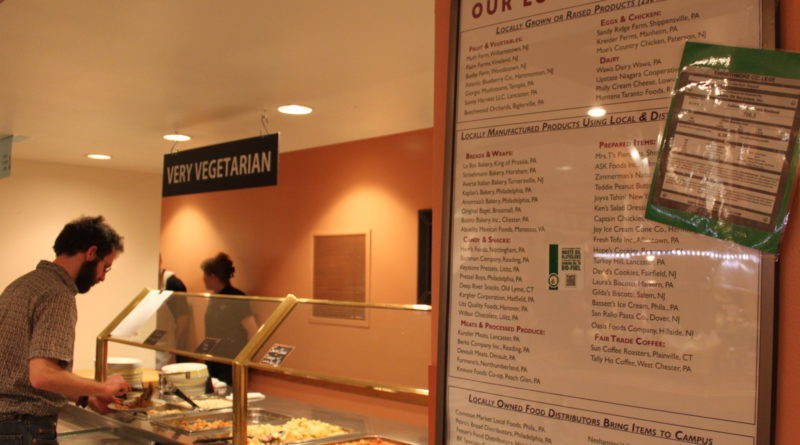 All of these price changes accompany a $117 raise in the price of all regular meal plans.

Unlike last year’s closing time of 7:00 p.m. on weekdays, students will now be able to enter Sharples until 8:00 p.m. Monday through Friday, while food will stop being served at 8:10 p.m. Closing time remains 6:30 p.m. on the weekend.  Because of this later closing time, meal equivalency for dinner at Essie Mae’s will be pushed back to 8:00 p.m., too. Along with these time changes, Essie Mae’s grill will now close half an hour before the scheduled close time, as opposed to last year, when the grill closed each night at 9:30 p.m. The Science Center coffee bar will also stay open until 1:00 a.m. Monday through Friday and will be open on Saturday from 10:00 a.m.-5:00 p.m. and Sunday from 1:00 p.m.-10:00 p.m.

Bag lunch will now have a wider variety of salad and sandwich options.  Sharples and Essie Mae’s, on the other hand, are eliminating peanut-based food because of allergies. A substitute for peanut butter called WOW butter, a soy-based product, will be used.

Students have mixed feelings about these changes.  Among the most positive responses is students’ excitement about the increase in meal equivalency at Essie Mae’s.

“The increase on meal equivalencies means that Essie’s will be more accessible for me, as in the past I’d often have to use two meals to fill up during dinner time,” Julian Marin ‘14 said.  “These increases in points makes meals at Essie’s actually act like meals, rather than discounts on your food. […] Additionally, it’s a win-win as you can still double swipe between Sharples and Essie’s and now get nearly double the value at Essie’s if you do so.”

Adrian Guerard ’14, however, does not agree that the increased meal equivalencies will always be beneficial.  Instead, he thinks it may lead people to buy food unnecessarily.

“Nine dollars is a lot for dinner at Essie’s,” he said.  “Double swiping was nice because it forced people to think about whether or not it was truly worth spending another meal.  I’m worried a lot of people will get far more than they actually need, leading to waste, or worse, longer wait times.”

While he disagrees that the inability to double swipe at Essie Mae’s will be detrimental, Imaleayo Abel ’14 believes the increased meal equivalencies will be especially helpful for students on the 14-meal plan.

Dining Services Director Linda McDougall attributes no longer being able to double swipe to the time changes in Sharples’ hours.

“With the increased hours, we feel that a student with almost any schedule can eat a meal at Sharples and then eat a meal at Essie Mae’s later.  They can choose depending on their activity whether the meal earlier at Sharples be a light meal or a hearty meal.”

For Noel Quiñones ’15, the time changes are crucial.

“I have been in many discussions about dining services at Swarthmore, and one of the biggest issues has always been timing,” he said.  “I am shocked that it took the administration this long to realize most of us should be eating dinner later than the old 4:30 to 7:00 p.m. Sharples times because we have to make whatever food we eat last until 2:00 a.m.”

Quiñones, as well as Guerard, also believes that the extended Sharples hours may make Sharples less crowded and hectic and, consequently, lead to shorter lines in the dining hall.  Marin added that the extended hours will also allow students who have a limited amount of time to eat at Sharples — namely, those who have an evening seminar or play a sport.

One concern regarding these changes, as shared by Abel and Quinones, is that because meal equivalency at Essie’s increased, so will the prices of items at the snack bar.  Abel attributes this hypothesis to his suspicion that the administration will need an incentive to deter students from only going to Essie Mae’s, rather than both Essie Mae’s and Sharples.

While McDougall said that, as with the increased meal plan prices, prices are contingent on operating costs, there will not be an across-the-board increase on food prices at Essie Mae’s.  This, according to McDougall, explains why the prices of meal plans have gone up.  While the prices of entrees at Essie Mae’s will not increase, select other items in the snack bar will.

“I think that the changes to the meal plan are things we needed to maintain the well-being of the student body,” Rose Pitkin ’14 said.  “A student shouldn’t have to use two meals just to eat enough food at dinner. With an increase in the amount of food we are allowed to get, especially at Essie’s, I would expect the price of the meal plan to go up. […] Aside from the increase in meal equivalency at Essie’s, which seems like the obvious use of this extra meal plan charge, I would like to know what the student who almost never eats at Essie’s is getting at Sharples with that extra money.  I understand market prices go up in general, but does it need to go up that much? And why hasn’t it changed over the past couple years?”

Marin and Guerard also feel that the elimination of peanut-based foods is unnecessary and will impact food preparation.

“As much as I don’t care for peanuts, it seems ridiculous that we should have to get rid of it,” Guerard said.  “Granted, if people learned how to isolate their peanut consumption so as not to contaminate the other stations, we wouldn’t have this issue.”

It is not only students who have concerns regarding these changes. McDougall does, too.

“One unknown [drawback] with all of these changes is the impact on our budget,” she said.  “We do not know how students will use their new options so we will need to closely monitor the financial impact of our changes.”

McDougall encourages students to be patient during the first few weeks of school, as both the dining services team and the student body adjust to these changes.