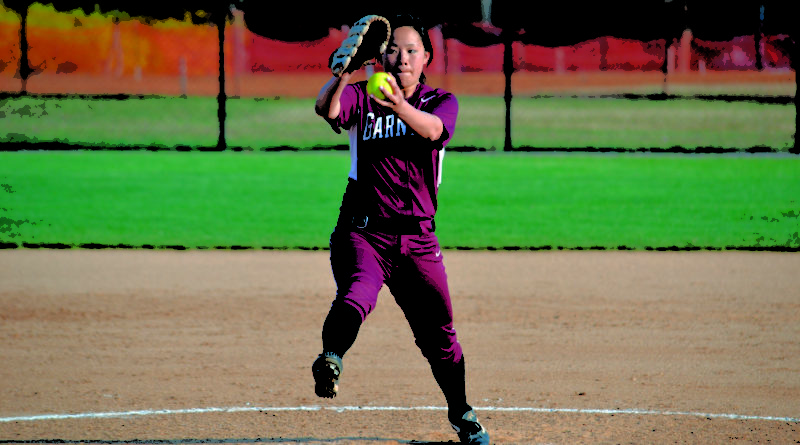 Led by strong pitching and good defense, the Swarthmore softball team has had an exciting season, playing in multiple one-run games and experiencing significant success, as shown by their 18-14 record. The pitching staff has posted an impressive 2.82 ERA thus far this season, led by Melissa O’Connor ’14, who has a 10-5 record and a 2.31 ERA. O’Connor has posted 117 strikeouts in 112.0 innings pitched, for an impressive ratio of 7.31 K’s per 7 innings.

O’Connor played a crucial part in Swarthmore’s most recent win, a 3-0 victory over Arcadia University. The righty went the distance, giving up just four hits while striking out five. Third baseman Rose Pitkin ’14 provided all the offense Swarthmore would need in the third inning, driving in first baseman Erin Curtis ’13 and centerfielder Kate Smayda ’13 with a double. Right fielder Chelsea Matzko ’15 tacked on an insurance run with an infield single in the fifth inning, scoring catcher Danielle Seltzer ’13. The win vs. Arcadia showcased many of the keys to success that Seltzer identified. “When we come out fired up, play tough defense, get solid pitching, and string together hit after hit on offense, we are most successful as a team”, said the senior backstop.

Offensively, the team has been led this season by Seltzer, Pitkin, Smayda and Nicole Aaron ’14. Seltzer has provided the most pop for the Garnet, leading the team in almost every offensive category, hitting .413 with 3 home runs and 29 RBI. Smayda has been a consistent sparkplug at the top of the lineup, batting .360 with a team-leading 13 stolen bases against just one caught stealing.

One highlight of Swarthmore’s season thus far was the team’s hard-fought 4-3 victory against Fraklin and Marshall on April 6. The game was especially significant because it came during the team’s annual Strike Out Cancer game. Seltzer credited the win to the team’s performance in all facets of the tame, saying that, “our defense and pitching really pulled through, along with our clutch offense that has been pounding out hits throughout the season”. The team, thanks to strong pitching, managed to strike out enough batters to raise over $3000 to be donated to the American Cancer Society.

Swarthmore’s most convincing win in Centennial Conference play came April 2, when the team defeated McDaniel 7-0. The win was particularly impressive because McDaniel qualified for the NCAA Tournament last season.

The Garnet scored their most recent Conference victory on Tuesday, earning a doubleheader split over the Washington College Shorewomen. After falling narrowly in game 1, the Garnet bounced back in game 2, striking first with three first inning runs and riding a complete game five hitter from Sarina Lowe ’14 to a 4-3 victory.

The usual suspects paced the Swarthmore offense. Pitkin pounded out three hits in three at bats, including a double. She drove in 2 of the Garnet’s four runs and scored another. Seltzer did her part as well, going 2-3 with an RBI, a run scored and a stolen base. Designated hitter Samantha Bennett ’13 broke the 3-3 tie in the with a fourth inning single up the middle, scoring Pitkin.

The win exhibited Swarthmore’s tried and true formula for victory: good pitching, strong defense and timely hitting. By throwing strikes consistently, Lowe give Swarthmore’s defense a chance to make plays, and they were strong behind her, playing error-free baseball. In contrast, Swarthmore’s offense took advantage of Washington’s four errors, scoring three unearned runs. The win was undoubtedly one of the most impressive of Swarthmore’s season, as it came on the road against a good team: after the loss, Washington’s Centennial Conference record now stands at 9-5.

Looking ahead, the Garnet have eight remaining games, including four against Centennial Conference foes. Their next tilt will be a home doubleheader against archrival Haverford, with first pitch slated for 1:00 PM. These will be Swarthmore’s final home games of the season, and the team will be honoring the strong careers of seniors Bennett, Curtis, Seltzer and Smayda. Seltzer said that the team’s goal for the remainder of the season is to “make some noise in the conference”. She added, “we also still have a shot at the ECAC tournament, in which we would love to advance”. Look for Swarthmore’s squad to continue playing tough, competitive softball as it strives to finish its season strong and advance to postseason play.

Editor’s Note: Several members of the Phoenix Editorial Board have signed this letter including our Editor Emeritus, Campus Journal Editor,

October 23, 2020 Zachary Robinson 0
Do NOT follow this link or you will be banned from the site!