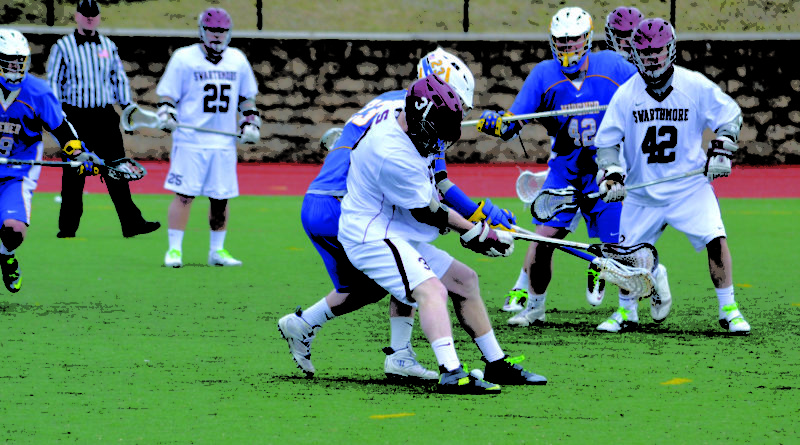 For the Swarthmore men’s lacrosse team, every game is a challenge. The Centennial Conference ranks perennially as one of the strongest lacrosse conferences in all of Division III, and this season is no exception. The conference features three top 20 teams, in 2nd ranked Dickinson, 10th ranked Washington College and 15th ranked Franklin and Marshall, and Gettysburg and Ursinus trail close behind and receive votes in the national poll. In order to compete against such difficult opposition, Swarthmore’s team understands that it must perform at the top of its game every time it steps onto the field.

Despite the team’s 3-6 overall record, the team has proven fearless thus far, refusing to bow to more highly touted opponents. This fearlessness has been especially evident at home, where the Garnet opened Centennial Conference play with a resounding 13-9 victory against Ursinus.

Unfazed by the Bears’ previously undefeated record, virtually every Garnet player contributed in a meaningful way. Steve Selverian ’13 and Andrew Preiser ’15 led the way for the Garnet, scoring three times each. The pair was followed by Ian Lukaszewicz ’15 and Wes Marcik ‘13, who notched two goals apiece.

The team’s performance against Ursinus exemplified some of the Garnet’s biggest strengths thus far this season. Lukaszewicz noted that “big keys have been faceoffs, offensive production and goalie play.” Lukaszewicz singled out goalkeeper Jon Cohen ’14 for his particularly important role in the team’s wins, saying that, “Jon Cohen played real well, and without his stellar play, the end result may have been different.”

Lukaszewicz particularly stressed the importance of winning faceoffs, something which Dane Fichter ‘14 and Geli Carabases ’14 did with regularity in the team’s recent victories over Ursinus and Elmira. “The more face offs we win,” Lukaszewicz said, “the more the offense has the ball, and the offense produced well in those two games, scoring double digits in both.”

Both Marcik and Lukaszewicz spoke about what the upset win over Ursinus meant for Swarthmore. Marcik described the game as “a huge highlight to my lacrosse career,” while Lukaszewicz added, “A win at home on a nice day with everyone down at the field is one of the best feelings you can have, and Ursinus was just that.” He pointed to the game as an indication of what the team is capable of when it plays consistently, saying, “The way we played in that game is the way I know we can play in our other conference games, as long as we can eliminate inconsistencies and play a full 60 minutes.”

Though Swarthmore has lost its two most recent conference games, to Muhlenberg and Gettysburg, the team’s 1-2 conference record leaves it in position to compete for a playoff spot if it plays well in its final five conference games. This task will not be easy; three of those five games are against nationally ranked opponents, including Saturday’s showdown against Franklin and Marshall at Clothier Field.

While Swarthmore may not appear to be in a strong position, beating Ursinus has proven to the team that they are capable of beating anyone. Marcik said that, “the way we played in that game is the way I know we can play in our other conference games, as long as we can eliminate inconsistencies and play a full 60 minutes.” Lukaszewicz and Marcik agreed that the team’s goal remains to make the Centennial Conference playoffs. While Lukaszewicz acknowledged that “we have the most grueling part of the schedule coming up over the course of the next three weeks,” he stressed that “if we pull wins from conference teams, there is no reason why we still can’t make the playoffs.”

The main key to accomplishing this goal will be for the Garnet to deliver the type of consistent performance that they did against Ursinus in the rest of its games. Marcik noted, “our team can play great or play poorly, depending on who shows up to play,” adding that “this season has been the largest roller coaster I have ever been on.”

The coming three weeks will determine if Swarthmore can withstand the challenge of nationally ranked competition and achieve its goal of qualifying for the playoffs. After the team takes on Franklin and Marshall Saturday, it will hit the road for a nonconference tilt against Drew University April 17, before traveling to Dickinson April 20. The team will play its final home game on April 24, against Washington College.