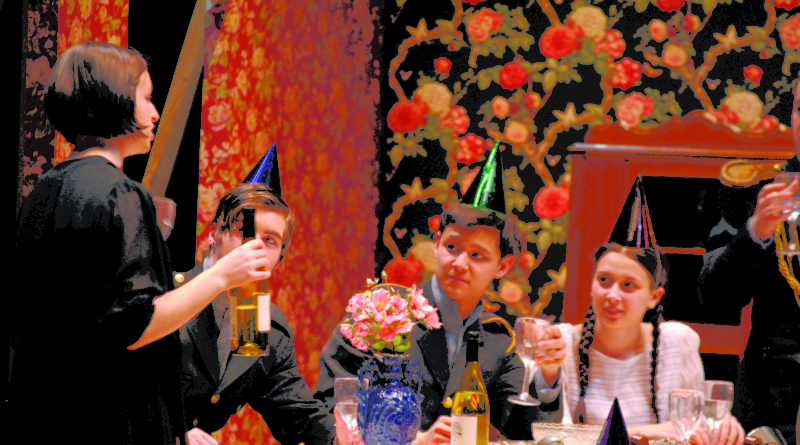 Fear not, Students of Swarthmore. Your weekends of plodding wearily from a highly contentious frat party to a socially acceptable Paces party are over. Those moments of gazing mournfully at LPAC on your way from the Science building to Sharples, wishing that if only you had time to pop in, beautiful art would be happening right there in front of your eyes, no longer needs to end tragically.

Yes, Swarthmore, it’s true. After an unbearable hiatus of four long weekends without a Theater Department play, we have a reprieve.

Anton Chekhov’s “Three Sisters” will be performed this weekend, April 5th at 8 pm, April 6th at 2 pm and 8 pm, and April 7th at 2 pm on LPAC mainstage.

If you’ve been paying any attention to the bathroom stalls, you already know.

“Three Sisters,” directed by guest artist Richard Hamburger and translated by Paul Schmidt, is this year’s Production Ensemble play. Production Ensemble (you will remember last year’s “Ivona, Princess of Burgundia” and “Farfetched Fables,” that play with the screen and Jessie Cannizzaro, the year before) is a mandatory class for theater majors, open to non-majors as well, whose aim is to put on a play. Costumes, set, sound and lighting are done by professional designers who double as faculty members; the stage manager is professional as well, and every other year the school hires a guest artist to direct.

“Three Sisters” is about “a family trying to come to terms with its changing identity as it goes through a series of personal and financial struggles,” summed up Nathan Siegel ’15, who plays Chebutykin, an army doctor.

Michelle Johnson ’16, who plays Masha, gave more detail: “The plot follows several years in the lives of the Prozorov family as a military unit visits the town and lives there. You see how those people interact with the sisters’ lives and affect their story arcs of getting work and dealing with marital issues.”

Masha is one of the sisters. “She is very outspoken and kind of doesn’t give a shit about what other people think,” Johnson said of her character. “She likes to challenge other characters because everyone is so passive in the play and she gets very restless.”

The other sisters are Olga, played by Madeline Charne ’14, and Irina, played by Casey Ferrara ’14.

“I think we have a really great cohesive cast,” Siegel said. This is good, because although the three sisters are the pivotal characters, “the show is really ensemble based,” according to Johnson.

“My favorite part of working on this play has been working with the cast,” Johnson said. “The play itself is frustrating because of the difficulty that Chekhov poses in the vast intricacy of his characters; you can’t just see who they are on the page, you have to follow his thought process throughout the play.”

If the actors succeed in following these thought processes, this play should be fantastic. The set, designed by Assistant Professor Matt Saunders, is huge—and the audience sits on either side of the stage, essentially forming part of the set. “I think it’s more realistic in the sense that there’s a 360 degree view,” said Aaron Matis ’16, who plays Solyony. “I can’t say from the audience’s perspective, but sitting offstage and watching the other performers, it gave me a sense of immersion.”

“The production is trying to make it feel like we’re living in this world rather than like ‘we’re doing a play,’” said Siegel.

Johnson discussed the importance of the show, saying that, “for young adults in general, it speaks to how important more mundane events can be in life, how earth shattering they can be. Even though that is kind of sad, the play also really focuses on how adaptable people can be and how strong they can be and how they can eventually learn to carry on and live their lives even though they’ve lost their dreams or hopes, and how they kind of shift and adapt to that.”

Matis had a more historical view of the importance of the show. “It’s a great play,” he said. “It’s tied into a lot of the Russian culture of the time, and Chekhov is renowned for a reason. He was a revolutionary playwright who introduced the concept of real life onstage, and that’s not something that most plays are able to pull off.”

A terrific cast, a talented crew, a classic text, Nathan Siegel playing a drunk old man, a director who’s been the talk of the town—these pieces add up to make a show that you won’t want to miss.