Opinion » Columns » Popular Science » “Standing Behind the Merits of Math” 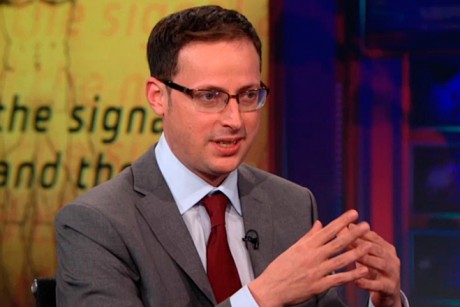 The night after Election Day, Jon Stewart proudly boasted he had the winner of the 2012 election that night. His guest was Nate Silver, the man who had done the not-so-unthinkable: correctly predicting the presidential election and all but one congressional election using polling data and statistics. Silver’s models had been doubted, ridiculed, and belittled in the days up to election day by talking heads and media outlets who wanted to see the race between Obama and Romney go down to the wire. And despite Silver’s high confidence that  there would be an Obama victory, no one was willing to rely on his calculations. There was perhaps some truth when Stewart quipped, “What I was really concerned about last night was that, if your prediction model had been wrong, it would have been a defeat of arithmetic.”

In a sense, Silver’s cavalier attitude (he was so confident that he bet MSNBC talking head Joe Scarborough $2000 that his model was right and that Obama would win) was in fact putting arithmetic on the line. For one reason or another, most political analysts were unwilling to call the election on the seemingly sturdy grounds of statistics.

Why not? After all, Silver’s model had been spot-on for the 2008 elections. However perfect his track record and elegant his model, Silver was arguing objective science to an audience that was more interested in abstractions — things like who had momentum, and whose body language showed confidence. Did these stories just make for good news, or was there simply a widespread under-appreciation for Silver’s methods?

A perpetual problem all around the world is how to spread “scientific literacy.” Yet scientific literacy has become essential for how voters and politicians make public policy decisions, from states deciding what goes into school curricula to our Congress deciding how committed we will be to combat the rise of the oceans and the warming of our planet.

Internationally, the United States fares quite well overall in surveys of scientific literacy. In 2008, the U.S. was second in the world, with 28% of its population demonstrating the range of scientific knowledge deemed necessary for personal decision-making and for understanding the policy issues of our government. This survey asked questions such as whether the center of the Earth was “very hot,” whether or not antibiotics kill both viruses and bacteria, and whether all radioactivity is man-made. Only Sweden scored higher on these questions.

Having 28% of Americans scientifically literate is a significant increase from the same figures from the late 1980’s and early ’90’s, which hovered around 10% of Americans with that level of scientific knowledge. However, 28% is still a relatively small proportion of the country, and the past decade has shown a disappointing stagnation in these numbers. The survey questions on which the U.S. does the worst as compared with other countries is on issues of evolution and the origin of the universe. In 2010, only 38% of Americans answered that the universe began with a huge explosion, and only 47% indicated that humans developed from earlier species of animals. These were phrased as true-false questions, so these answers indicate that respondents did a worse job answering these questions than they would have had they guessed randomly.

Much of the credit for the U.S. getting numbers up to even their current levels comes from more Americans attending colleges and universities than ever before. U.S. universities are unique because they require all students to take general science credits in order to graduate, even students who are not majoring in the sciences. Surveys have consistently shown the number of college science courses taken to be the greatest single factor behind scoring well on scientific literacy tests. There are two reasons why college science courses are so important. One is that they are much more demanding than anything offered at the high school level, forcing the students to engage the material more thoroughly. However, the significant boost college students in science classes get can also be attributed to the country’s generally poor science programs in high schools.
U.S. K-12 students are typically in the middle of the pack in standardized testing administered internationally. For instance, a 2007 test ranked the United States 11th in the world, trailing countries like Singapore, Taiwan, South Korea, Hungary, and England across the board in math and science. Within the United States, students growing up in families of low socioeconomic status were especially likely score badly on these tests.

Because many Americans will never go on to get a four year college degree — some will never finish high school — the K-12 years are the best time to teach many Americans about scientific fact. However, these facts may not be enough to help many Americans keep up with modern scientific issues throughout their lives. For instance, the true implications of climate change have only recently begun to emerge — an issue that would never have been taught in a K-12 setting only a few decades ago. A high school education may be informative to teach students about the fundamentals of science, but whether the curricula gives students the tools to engage scientific issues throughout their lives is up for debate.

Finally, there are cultural issues that also contribute to how Americans score on these tests. As mentioned above, the United States has disappointing scores on topics regarding evolution and the origin of the universe. Many American citizens believe in a literal interpretation of the story of Genesis, the first book of the Bible. Those who believe that the Earth was created in seven 24-hour days reject theories of the big bang and evolutionary development, which are the dominant narratives in the scientific community. When scientific debates are brought into the political sphere, this can also create widespread belief in non-scientific or poorly supported theories. One needs to look no farther than the inflammatory comments made by some pro-life Republican candidates during the last election cycle (ie. Todd Akin) to see how quickly unscientific viewpoint can enter political discourse, to the point where it becomes a counter-argument to scientific facts. This phenomenon is largely responsible for the widespread disparity in opinion over global climate change in this country, a disparity that is virtually non-existent outside of the United States.

Nate Silver’s claim to fame this election was to stand behind the merits of math, and he was rewarded for it. However, other Americans’ reluctance to do the same demonstrates how far we need to come as a country in order to understand the power of elegant math and science. As science becomes a more important factor in personal decision making and in determining public policy, it is vital for our citizens and our government that everyone is given the tools to engage with the fundamentals of scientific thought. Finding ways to dispel a culture of science-denial and to promote engagement with scientific topics past K-12 education should be a top priority for this country, and for countries the world over.