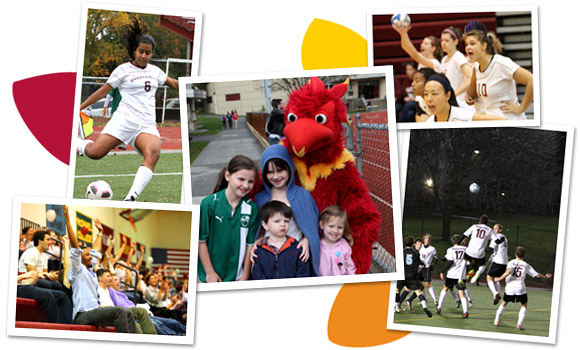 This past weekend, schedules were packed for the students, families and alumni who came to the third annual Garnet Homecoming and Family Weekend. Along with athletic events, tours, workshops and faculty and alumnus talks as in the past two years, new networking receptions, Garnet Hall of Fame Unveiling and Legacy Circle Luncheon were added on, encouraging more interactions among the three groups.

The Family and Friends Weekend used to be in the spring, but the event was moved to October to enable parents to visit students earlier. It was renamed three years ago because “We were adding this homecoming component and we want this homecoming part to be first because we really hope to draw our alumni back,” said Melissa Pizarro, Director of Donor Relations.

“Students will discover that when they become alumni, they will take any opportunity to come back and visit,” said Christopher Edley Jr. ’73, Dean of UC-Berkeley Boalt School of Law and speaker of the highlight of the weekend, the McCabe Lecture entitled “Creating the K-16 Education System American Needs.”

“I enjoyed hearing Mr. Edley’s talk about the future of education,” said Bruce Rockwood ’68, now retired Professor and Chair of the Legal Studies Department of Bloomsburg University. “I have been teaching for about 35 years. I think Swarthmore is always a place that produces educators for elsewhere. We plant the seeds of ideas and develop programs for the colleges and universities we teach at.”

The college provided a variety of programs for the approximately 1,000 people coming to Garnet Weekend. Besides lectures, there were athletic events, and the women’s field hockey team, women’s volleyball team, women’s soccer team, and men’s soccer team all competed with Haverford. Garnet Weekend usually takes place in the third or the fourth weeks of October. “We choose the weekend that has the most athletic events,” said Pizarro.

Considering previous years’ responses, the college initiated a new form of the networking receptions event. Last year, the business networking session was separated from the health and law reception session. This year was the first time the college put all three of the fields— law, business and health— together in this one hour reception.

“It gave them an opportunity to flow,” Pizarro said about the change. “We have all these groups on campus at the same time so we hope to give students the best opportunity to network with everybody that’s around.”

“I think the format works very well,” said Payyi Wann, a mother of a Swarthmore freshman. However, she expected to see more juniors and seniors coming to such networking events in the future. She came with her husband, and said that she thinks the Garnet Weekend events were “very well-organized and in-depth, and next year and for the next four years, we plan to come back.”

Wenkai Lu, Wann’s husband, also suggested having an event just for the parents so that they could “mingle more informally.” He hopes to see someone organize such an event to promote communications among parents.

Alexander M. Capron ’66, Professor of Law and Medicine at the University of Southern California, is a Swarthmore alumnus and a parent of a sophomore at the college. Professor Capron came to the law session of the networking receptions. He believes more sessions on academic professions, such as the teaching profession, could be added to the receptions.

Craig and Linda Giangrade, parents of Tara Giangrade ‘16, also came for the weekend to learn more about the college and to “See how our daughter interacts with her friends.” They went to the lectures, President’s Welcome and Quakers, Swarthmore and the Underground Railroad Walking Tour.

But this weekend was also for students. “We want to make sure our students know that it’s happening. For the future of Garnet Weekend, I would love to see more student engagement,” said Pizarro.

This year, there were two students in the Garnet Weekend Planning Committee. They attended the meetings and brought student perspectives. Eliza Polli ’13 was one of them. “I thought the Pep Rally was the best it has ever been and the community seemed much more engaged in the activities, possibly because of the events surrounding the Hall of Fame inductions and the Haverford athletics day,” she said.

Brone Lobichusky ’14 agreed. “I think the addition of the Hall of Fame this year was excellent, and I look forward to seeing that in the future.” Lobichusky hopes to see more events centered on students. “I hope the Planning Committee can work on a survey of students and see what they would attend and be excited about.”

“I think my dream would be to be walking down Parrish Walk and hear students talking about how excited that they are as the Garnet Weekend is coming up,” said Pizarro.