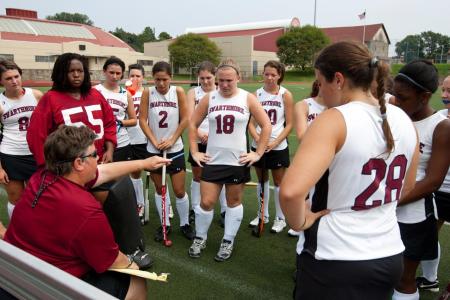 For four consecutive years, the Swarthmore College field hockey team had failed to pull a W out of Washington College in their annual Centennial Conference matchup. A week ago Wednesday, the Garnet finally emerged victorious over their Shorewomen in a milestone win. Their thrilling 3-2 come-from-behind victory ended a three-game losing streak overall, the long losing streak to the Shorewomen, was the 150th victory for head coach Lauren Fuchs.

The number “150” is only one of many marks Fuchs has left in the field hockey program in the past five years since her arrival after stops at the University of New Hampshire, Temple University, and the University of Maryland-Baltimore County. She has completely revitalized the program while changing many attitudes towards the sport.

When she first arrived, Fuchs recognized that “there wasn’t an all-in attitude amongst some players.” Captain Sophia Agathis ’13, also remembers the program’s rocky past. “For my first two years, wins were a struggle for us to come by,” Agathis said.

Agathis, along with Allison Ranshous ’13, Catie Meador ’13, Katie Teleky ’13, and Julia Tallarico ’13, composed Fuchs’ first recruiting class as head coach.  Now four years later, Fuchs looks at these five four-year starters and remembers the role they played in helping her through the rebuilding process. “As underclassmen, they stepped up as leaders during the transition period,” Fuchs said.  “They changed how we wanted to do things…they kind of changed the culture of the program.”

As with any transition period, it was not always a smooth ride. “We definitely went through some growing pains,” Fuchs admitted. This was perhaps not a surprise as the former UConn star arrived at Swarthmore after 15 years as a head coach in Division I. “She’s been around the block and she knows what she’s doing,” Agathis said. There was certainly an adjustment period as the Garnet players learned and internalized Fuchs’ expectations. “She brings an intensity, but not so much just win, work hard, win,” Agathis explained. “She loves the game, and she’s passed that onto us.”

Now, as the team heads into the final two weeks of its 2012 regular season, Fuchs’ “first” five seniors can finally experience the lasting effects of their hard work. “The younger players are doing well and it’s because of the standards that the upperclassmen have set,” Fuchs said. “Doing well,” could be considered a vast understatement: Audrey Allen ’16 tipped home the game-winning goal in the 65th minute against Washington and Erin Gluck ’16 pulled out a hat trick in Swarthmore’s first win since 2000 against Gettysburg last Saturday.

For Agathis, “This last part of our season – because we’re graduating five four-years starters– it’s just a really good opportunity for [underclassmen] to step up…they know we’re not always going to be there,” is.

After the win over Washington, Fuchs was unaware that she had reached the 150-win mark until she was congratulated by several players. After being told why the congratulations were in store, her response?  “You’re funny.” Right now, the only thing Fuchs is focusing on is the goal she set for herself five years ago: to build a program that’s constantly fighting for Centennial Conference playoff berths.

The Garnet was in playoff contention until the final day of the season in 2011, and with four Centennial games remaining this year, Swarthmore is in the thick of an eight-team race for five postseason spots.

Fuchs’ players share similar ambitions. “We want to be above 500…but we really want to make Conferences, and we want to go deep in Conferences,” Agathis said.

As lofty as these goals may have sounded four years ago, the team, guided by Fuchs, is rewriting the narrative of the Swarthmore field hockey program.

The Garnet travels to McDaniel on Saturday for the first of two matches over October Break.  Swarthmore plays its final road game of the year at Muhlenberg on Wednesday.