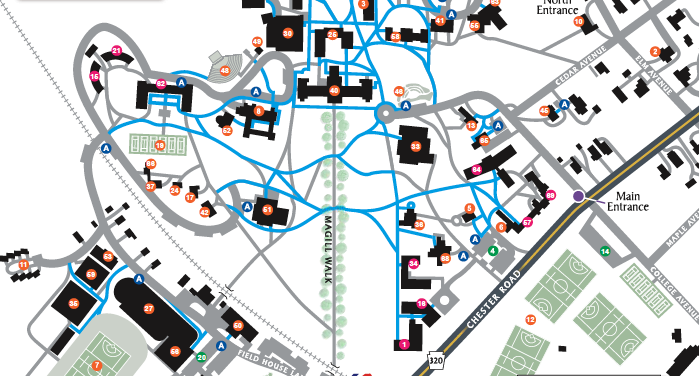 At least a couple new buildings will be planned for campus in the next few years. At the semester’s first master planning forum two weeks ago, Adam Gross, a representative from the architectural firm Ayers Saint Gross, gave a presentation brimming over with ideas.

When the Gazette first covered the forum, we focused on the philosophy of the Master Planning process and the direction in which it’s headed. To keep the discussion going, the details of many of the proposed buildings were outlined in the forum.

At least one new dorm building, enhanced student spaces, and expanded athletic facilities are all on the radar for the future. Except for the athletic facilities, the College still has several sites available from which to choose the new buildings’ locations. As a result, the presentation allowed participants to consider the merits and drawbacks of far more buildings than will ever be actualized.

The dorm, for example, may be placed in front of Wharton, where the tennis courts are now. If the process eventually favors this location, those tennis courts might move south of the tracks so that the courts—which are set into the hill—could be converted into a basement parking garage underneath the new dorm. The architects also showed that multiple dorms could be placed along the path that currently connects Wharton to Sharples.

Most of the proposed dorms would land near clusters, like Wharton-Danawell, where they might help create loose quad-like spaces. Currently, dorms are generally located near one another, but these new buildings would intensify such clustering.

The architects also sketched up a plan in which Mephisto’s Lounge, the single-level appendage to Willets, is torn down and the space between that dorm and Worth is turned into a level, landscaped quad. One option has new wings built onto Willets to add to the sense of a quad; another option suggested replacing Mephisto’s with a multi-level building.

Other dorm proposals followed a similar pattern. A controversial idea is the placement of a dorm behind Mertz, just north of David Kemp. This plan would allow the wooded area behind Mertz to become a central space, possibly with fewer trees and more open landscaping. A drawback to this plan is that it the new dorm would back up against Chester Road, furthering the wall that makes the busy road a psychological barrier between the Swat bubble and the outside environment.

A fourth option would be to locate the PPR cluster south of the tracks. The new dorm would be located behind Pittenger and Palmer, and the back driveway would be relocated. While some students expressed concern that the addition of residential at PPR would further segregate the student body, the architects and administration representatives pointed out that the completion of the College Inn project adjacent to the train station will help connect PPR to the campus psychologically.

Not all the suggestions, of course, involved dorms. A major focus was on improving indoor gathering spaces for students, especially in Sharples and Clothier. When Gross asked the group what components they though a student center should incorporate, answers tended to focus on study spaces, where students could gather for group meetings, study sessions, or just hanging out. At the moment groups frequently have to meet in classrooms to find privacy. Students also said that student centers should have a game room, music practice rooms, dance floors, and kitchens.

Perhaps, suggested the architects, an annex could be built on the south side of Sharples. One popular idea is to turn the slope below Clothier (just above Sharples’ front door) into a terraced, park-like space, complete with a flowing stream, where students could sit and talk or eat.

But the primary change would be a complete redo of Tarble. The architects seemed confident that removing the Upper Tarble deck would create a more open, inviting space that Gross said would evoke “the University of Chicago or Hogwarts.” Since the bookstore will relocate to the new Inn when it is built, the Tarble basement will be remodeled, possibly as a student group meeting space with modern amenities like blackboard walls, comfortable chairs, and lots of Internet access—somewhat like the new study space inside of Hicks.

Natalia Choi ’15, attending the forum as a StuCo representative, expressed concern that removing Upper Tarble, which is used by many dance groups, would make it hard to find a decent surface for dancing on campus. R ‘n’ M currently holds some practices in the carpeted hallway in LPAC for lack of other space. But if the Wellness Center, an already-approved building proposal, is funded, dance space may be available inside of it.

“I saw that the school was expanding and the spaces weren’t keeping up,” Choi said.

Chris Moyer ’15, another student present at the forum agreed that the school needs places that mix hanging out, studying, and food. He said some of the current libraries, like Underhill and Cornell, are tailored to a specific subject and thus unwelcoming to the student body as a whole. However, he mentions the new study spaces included in the Hicks renovation as a good example of the type of design that might work.

A new dining hall didn’t seem like it was in the cards, but the interior of Sharples might be remodeled. Students emphasized the absence of natural light, and some called the layout awkward.

Athletics facilities could be improved, according to the architects, through the addition of just a couple new buildings. Their proposal would attempt to draw the existing facilities into a cohesive whole through the creation of a horizontal axis connecting the Mullan Center to the main Fieldhouse entrance.

The Fieldhouse might be opened up a bit on the side facing the stadium, and a second floor might be added to the Fieldhouse building. That whole building would see improvements, including better locker rooms and increased office space for coaches.

On the opposite side of the athletic facilities, the squash courts will be replaced by the Wellness Center.

Beyond new buildings, the architects made an effort to identify the major corridors on campus and improve them in order to better integrate the different sections of campus. These corridors are paths like, those on the sides of Parrish beach and the perpendicular arteries that connect, for example, Willets to Sharples or Wharton to McCabe.

One corridor that could see improvements is the tunnel underneath the railroad tracks. If Sharples gains an addition, said the architects, it could be designed to point towards the tunnel. They also said that a visual link between the two sides of the tracks might be created if the proposed a second floor to the Fieldhouse building can be seen from the north side.

They also suggested making improvements to the gateways to campus, like the nondescript sign along College Avenue that marks the uninviting, blurred border between Swarthmore the College and Swarthmore the Ville. The Inn project, for instance, would incorporate design features indicating to drivers entering Fieldhouse Lane that they have entered the College, not simply slipped in through the back entrance.

As for the the border between the College and the Crum, Vice President for Facilities and Services Stu Hain said that one goal “is deepening and extending the tree canopy [on campus in order to] create more fluidity between the woods and the campus.”

Two more forums, scheduled for October 24 and 25, will bring the rest of campus, including academic spaces, into the conversation. Favored preliminary ideas will be presented on campus again in more concrete form in December before a first draft of the Master Plan is published in February. The final plan will likely be published in May.

This is part two of a two-part article on Tuesday’s Master Planning Forum. Part one appeared on Thursday, September 27.