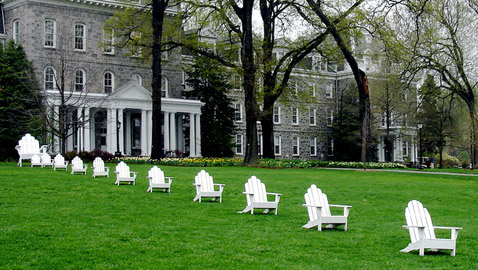 Students have submitted a number of suggestions to Student Council through the Council’s Small Steps Forward initiative, which solicited ideas about what StuCo should do to make the school better.

One major issue addressed was dissatisfaction with the limited hours of Sharples and the meal equivalency at Essie Maes; Co-President Gabby Capone ’14 is researching peer institutions’ meal facilities and meal equivalencies to look for solutions.

Another main theme among the suggestions was the need for stop signs around campus – one on corner of Yale and Harvard Avenues, one on Route 320 (Chester Road), and one on campus. Co-President Matt Lamb ’12 also mentioned a desire to find out why some buildings are locked at certain times and days but not others. He said that he had a meeting scheduled Monday with Vice President for Facilities and Services Stu Hain about the issue.

Students also raised concerns about student access to vans, student groups being able to use the media center, having compost in dorms, the weakness of the wireless network, and the fact that most of the bikes in the bike share program are broken.

Student Groups Advisor Lanie Schlessinger ’15 said that the success in getting responses to the Small Steps program “says a lot about what getting a new website did.” Members agreed that it will be important to get results on the issues that students have addressed so far so that Student Council becomes a more credible forum for students to turn to for help.

Student Council will be holding a meeting next week with Dean Braun to discuss how they can get help on the issues mentioned in the Small Steps Forward initiative.

They will also ask her why the Cleary Report of statistics concerning the occurrence of crimes – most notably, sexual assault – reported to local law enforcement agencies or Public Safety has not been published for 2011 and what the expected timeline is for doing so.

Schlessinger raised a number of challenges with the existing method for chartering groups. Currently, students submit a charter proposal to Schlessinger, who reviews it and meets with students to ask questions. Schlessinger explained that these meetings often need to last only three minutes, a process that she called “silly” since many students find them to be too short to warrant an in-person meeting at all.

She proposed a plan at which she arrived after speaking with Coordinator of Student Activities Paury Flowers and SBC Chair Amelia Mitter-Burke ’12. Under the proposed system, charters would be approved via e-mail; students would send the charter to Schlessinger, and she would edit the charter and send it to the chartering committee.

Capone mentioned that one benefit of the current system is that the meetings are one of the few times students meet with StuCo members face-to-face in that capacity. Lamb expressed concern that the system would not deal with a “worst case” scenario in which students are confused about the chartering process.

Schlessinger pointed out in response that chartering is a uniquely simple process, unlike other functions that the Council serves in person. However, StuCo members wondered whether the simplicity of the current process is a sign that they should be asking better questions of groups seeking a charter.

The Council decided to have Schlessinger write a proposal and distribute it to the Council for their consideration at their next eeting.

Schlessinger has put together a student groups directory, which includes a brief description of each group, their contact information, and meeting place and time, which she will be sending to student groups so that they can further edit their information.