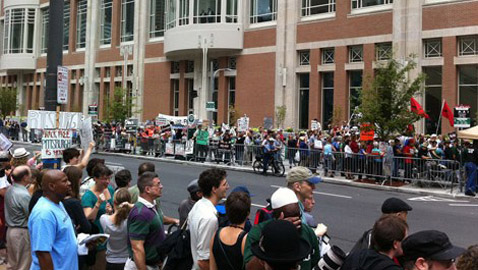 Morgan Bartz ’14 is part of a growing coalition of students on campus who call themselves Swarthmore Frack Action. Together, they campaign against an extraction process known as hydraulic fracturing, or “hydrofracking.” According to Bartz, fracking is a human rights issue because oil and gas companies frequently take advantage of communities who are struggling to make ends meet.

“I went to a hearing in upstate New York over the summer where a subsidiary of ExxonMobil was applying to take water from Oquaga Creek, a trout stream that flows to the Delaware River,” says Bartz. “There was a hearing held in the town that would be most affected by it. This is a town that’s economically depressed, but at the same time its main attraction is tourism because it’s in a beautiful area of upstate New York. It’s what they’re known for — the landscape and fishing. Some of the locals showed up at the hearing with signs that said, ‘Natural gas: American made.’ They said that their town is economically depressed and that this is going to help them. At the same time, if their main source of income is tourism, that’s going to be affected for the worse by fracking.”

Bartz and other anti-fracking activists are determined to alert communities about the negative effects of hydrofracking before it’s too late. Many of these community members heed the call to action and vocally oppose corporations like ExxonMobil. But Bartz’s example of the fracking proponents from the Town of Sanford demonstrates the movement’s fundamental roadblock: faced with economic challenges, these communities often have little incentive to want to listen.

“[Some of the] locals argue that we are elitist environmentalists with special interests who don’t have to deal with their failing economy and have our own special reasons for being there. They don’t think we should have a say in whether or not fracking is allowed in their community. At the same time, it does affect all of us and we should have a say because the creek in question runs into the Delaware River, and we live downstream. If the Delaware River is contaminated, we are all at risk, because it will affect us in the future.”

Although Swarthmore Frack Action considers itself to be an environmental issues group, Bartz explains that the activists are concerned about the health of individuals affected by frack water whether or not those individuals have any interest in environmental activism. She has heard firsthand the testimonies of people whose water has been significantly and visibly contaminated.

“Because hydrofracking is a primarily unregulated industry, once people lease out their land for gas companies to use it, either the chemicals for hydrofracking or the gas itself migrates into well water or groundwater, and as a result people’s water is being contaminated. They can’t shower in it anymore and they definitely can’t drink it anymore. The people who didn’t know their water was being contaminated are now suffering the health consequences of drinking highly contaminated frack water.”

A number of people who have experienced these health consequences are featured in Gasland, an Oscar-nominated documentary screened by Earthlust as part of GREENmarch 2011. Following the screenings, director Josh Fox spoke in the Science Center about what Swarthmore students can do to fight hydrofracking. He encouraged interested students to form a coalition.

“We all gathered on the side and exchanged emails, and that’s how the group was created,” says Bartz.

Although Swarthmore Frack Action focused largely on campus advocacy last year, the group hopes to become more involved in direct action in the coming year. Due to its growing relationship with Protecting Our Waters, a Philadelphia-based alliance against “unconventional gas drilling,” the Swarthmore group became involved with a conference called Shale Gas Outrage. On Wednesday, September 7th, a dozen representatives from Swarthmore traveled to Philadelphia for the conference’s Rally to Stop Dirty Gas Drilling. Held in front of the Pennsylvania Convention Center, the rally was organized in response to the Marcellus Shale Coalition’s Shale Gas Insight conference on September 7th and 8th. The conference was attended by CEOs from major fracking companies as well as Pennsylvania Governor Tom Corbett and former governors Tom Ridge and Ed Rendell.

“It was about making a lot of noise and attracting attention,” says Thomas Boucher ‘14. “I think that’s a good thing because not all of Philadelphia knows about hydrofracking and it still doesn’t attract that much press… I thought it was really well organized.”

Both Boucher and Bartz stress the importance of networking within the cause at these kinds of anti-fracking events.

“Not only people interested strictly in fracking showed up and there was a good mix of ages,” says Boucher. “The rally was more for networking and more of an enjoyable experience than other things we might be doing against fracking.”

“You get to network with these other organizations and get to know each other better,” says Bartz. “We’re all working towards the same cause. This is how I’ve met all of the people I know working against fracking. Once you start going to things related to fracking, these large events, you see the same people over and over and realize how committed people are. They take off work for this.”

Frack Action hopes to build a similar community of anti-fracking activists at Swarthmore. Bartz encourages people who are interested to email her (mbartz1) to be added to the group’s listserv.

“Natural gas is not ‘the better coal,’” she concludes, citing a Cornell University study. “Some people have termed natural gas the ‘bridge fossil fuel’ that can be used for the next fifty years or so while we’re still trying to make the transition from fossil fuels to renewable energy. What I’m trying to say is that we should make the transition now because natural gas isn’t worth the cost… One thing I’ve learned is that a lot of people only see the short-term economic benefits from natural gas and they think, ‘This will help our economy.’ But then later, when they see how their water has been affected, they realize it’s not worth it.”