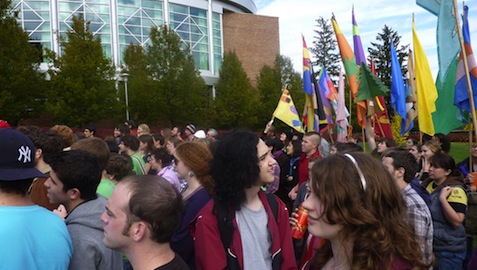 Swat–Ecosphere, a new umbrella organization for all green groups on campus,  is bringing together environmentally oriented student groups, campus committees, and faculty and community partners, to better use resources and facilitate communication.

The joint endeavor is the natural response to the proliferation of green activism on campus, says Camille Robertson ‘12, the coordinator of the new Swat-Ecosphere. “When I was started as a freshman, there were three green groups,” said Robertson. “Now there are six.” The six groups are, Earthlust, Mountain Justice, Green Advisors, Swarthmore Frack Action, the Good Food Project, and Envionmental Justice.

Swat-Ecosphere’s leaders hope that “with increased communication we can focus and appreciate how our efforts are complimentary,” Robertson explained. Green groups will share resources and streamline communication and announcements with a combined list-serve, which they will use to send out a weekly digest, s for students interested in environmental causes.  In partnership with Career Services, the list-serve will also feature a section for internships, jobs and fellowships.

Swat-Ecosphere seeks to also present the administration with a unified student voice. Leaders hope to include the Sustainability Committee, Crum Woods Stewardship Committee, and Climate Action Planning Committee on the list. Swat-Ecosphere will have monthly dinner meetings with the Lang Center’s Environmental Sustainability Coordinator (a position in the process of being filled  by the Appointments committee), giving students the chance to voice their views and ideas directly.

“I’m hoping that a partnership will the new coordinator will allow student groups and college committees and departments to see each other’s efforts as complimentary and opportunities for collaboration,” said Robertson.

Organizers hope that the new organization will improve the Swarthmore community’s accessibility to green activities, but what the relationship will ultimately look like remains to be seen. “We’re a loose, still forming coalition,” said Robertson.