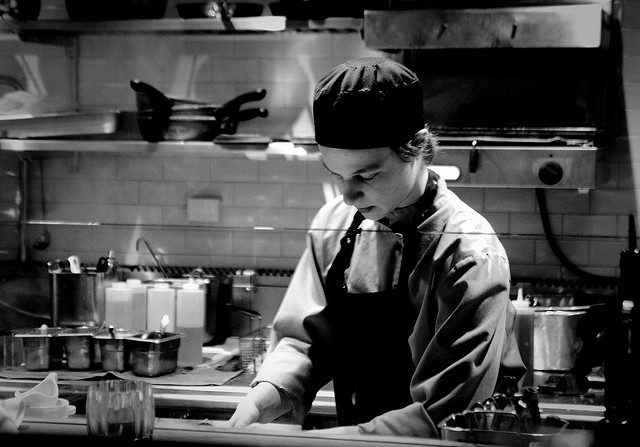 I had no idea what I was getting into. I was a 19-year-old Bangladeshi-American kid  – with no prior experience even working a job  – about to learn intensively how to cook. French Culinary Institute in Soho is one of the top culinary schools in the country, which is impressive considering that their program only runs six months instead of two to four years. We spent almost all of those hours in the kitchen. In the first two months we took a broad view of cooking techniques. In the third we started to practice for restaurant-style volume of service. I haven’t made much use of my culinary diploma yet, because I am going back full-time to college, but study stress will probably seem a comfort in comparison to the crucible of the kitchen.

Before I matriculated into the school, I wasn’t really much of a cook. I had spent a good portion of my life from grade six competing to get into a top college, making me what my classmates would refer to as a “pencil-neck.” My father is an economist who can’t change a flat tire, and knew about three recipes from grad school. My traditional Bangladeshi homemaker mother didn’t allow me near the stove, so it was only one day when she was out that I decided to make a clandestine breakfast. It barely counted as cooking, as all I did was dice bell peppers and cook them with breakfast sausage. Later that day I made biscuits from scratch. When my mom came home, she asked me where I had bought the biscuits. I told her that I had made them. After that, I started making steak once in a while, which was really an experiment because I didn’t know how to check a steak’s doneness. I also cooked the turkey and made stuffing and mashed potatoes for Thanksgiving dinner.

Unfortunately for me, the class I was in at the French Culinary Institute was exceptional. There were seventeen men, several of whom were already amazing cooks: salty old hands in the kitchen with frames and bellies to match. They told me stories about horrific deep fryer injuries and famous chefs making grown men break down in tears. From the beginning, this group knew their way around the kitchen and would sometimes butt heads with Chef Jason, the instructor, since they already knew their own ways to do some of the recipes (one guy went as far as to makeHollandaise over a burner instead of over water). Even the youngest among the men had at least a year or two of experience; like me, none of the three women in the class had any prior experience.

In Level One, we began with taillage  – and taillage was no fun. The idea of taillage is cutting vegetables into uniform shapes so they both cook evenly and please the eye. At that point, I hadn’t even learned how to sharpen my knife, and as one of my classmates put it, I “peeled like a housewife.” While the rest of the class, mostly a pretty adroit group, was learning fairly quickly, I was struggling in terms of speed and regularity. Chef Jason would pick out two of my macedoine carrot “cubes” and show them to me. Some were kind of square, others came out as trapezoids and even triangles. None were the same size. When it came to actually cooking them, my results were pretty dim. Since so many of them were different sizes, half of them were always mushy, while the other half were still crisp and undercooked. My sense of seasoning was off. Even if my assigned dish miraculously came out well, it was often very, very under-seasoned. I think the only thing that really came out well was my vinaigrettes.

In Level Two, my classmates had begun to pick out the good and bad cooks. I was pretty firmly in the second category, next to the Star Wars-loving man-child who later killed a New York City squirrel and made stock out of it (he didn’t graduate). I had shaky hands and was unused to the kind of pace and productivity that a kitchen demands. “Egg Day” was probably when I hit bottom. I moved the water bath in which my custard was sitting a bit too much, and it created a tiny tsunami that watered down and ruined the whole dish. My partner at the time, a very short no nonsense midwesterner, muttered “fucking idiot” under his breath and turned his attention right back to my dishes. Poached eggs didn’t even happen. After three tries, everyone had already moved on to the custards, and the only thing I got out of it was a late start – my eggs kept either falling apart in the water from too much agitation, or breaking on the bed of macedoine vegetables we were supposed to present in because they were undercooked. At least my omelette came out alright.

In Level Three we switched focus to volume and consistency. Each “island” of four people was assigned one of four positions: garde manger, poissonier, entremetier, and patissier, making appetizers, fish course, meat course and desserts respectively. I had to bust my ass from the beginning because I was completely unprepared for volume and time limits. Each week we had one practical exam. The key to the practicals was to act quickly and deliberately, and above all keep an eye on the clock. Five minutes late was basically failing. This was my crucible.  The first practical I nearly failed because not only were my poached eggs way under, but they were also several minutes late, and improperly plated. Two of them were open, with the yolk oozing out, before they reached the tasting table. I struggled though. Starting the second week I would stay after class on some days to practice with Chef Dominic, another instructor. He would lead me through the dishes and I would fry this and sear that (sometimes with three or four pans on two burners) while keeping my eyes on the oven and my overall time left. I definitely learned the most during this level, and after that, the last three levels were almost a cakewalk.

By the time I had passed the first three levels, all the stuff I had done before started to make more sense, because I focused on each individual part of the dish more. The fourth level, we cycled between making lunch for the entire student body and the staff, doing production for the kitchen (fileting whole fish and taking apart pork racks), and making our own buffets. In the fifth and the sixth I worked in the main kitchen for the restaurant. In the morning we did prep work and then we did lunch service after about 12:30pm. There were two whole classes in the room, and we had much more latitude – I made my own specials a couple of days and canapé another. Finally, class became fun. I graduated, if not with honors, then at least with pride.