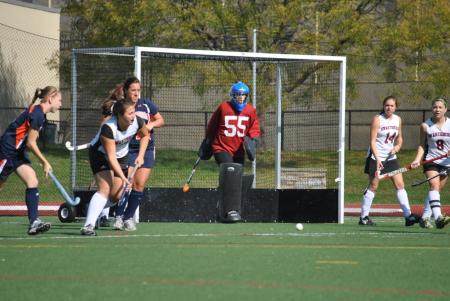 A dominant first half propelled the Swarthmore Garnet field hockey team (1-0) to a convincing 6-2 victory over the visiting Virginia Wesleyan Marlins (0-1) on Saturday.

Behind a pair of goals from junior Katie Teleky, the Garnet jumped out to a 5-1 lead before the intermission.

Just 1:58 into the contest, Teleky opened the scoring on a scramble in front of the net. Rookie Beth Johnson sent a ball behind Wesleyan keeper Kirsten Olson and Teleky was there to poke home for the early lead.

That advantage was doubled less than five minutes later when the duo connected again. This time, Teleky dribbled around the keeper and found Johnson alone on the weak side for the easy finish.

After the Marlins halved the lead in the 13th minute on a deflection in front of Garnet keeper Gabby Capone ’14, who earned her first career victory in net, Teleky answered right back with her second of the game.

Before the first half was over, Maegan Hearney ’15 and Nia Jones ’14 found the back of the net – Hearney’s goal from Johnson and Jones from classmate Aarti Rao ’14, who controlled the right side of the midfield for the entire match.

That midfield was as good as advertised for the Garnet as Rao, juniors Sophia Agathis and Catie Meador, and freshmen Eileen McHugh and Abby Lauder dictated pace and play.

Agathis led the team with six shots, five on goal.

Midway through the second half, Julia Tallarcio capped the Garnet scoring off a corner as her thigh-high drive was tucked just inside the far post to the left of Olson.

Evan Bunting scored off a corner in the 58th minute for the Marlins.

The Garnet returns to action on Wednesday as the Ospreys of Richard Stockton visit Clothier Field at 4PM.