As it is my last year at Swarthmore College, I find it only appropriate to begin utilizing some of Swarthmore’s resources, namely the College Archives. At one point in my life, I wanted to be a history major (that point is many semesters behind us), but that slight interest in the past still remains. On a late-night binge when I should have been doing readings for another class, I fell down the rabbit hole that is our college’s digitized collection of past Swarthmore Phoenix publications. Ranging from December of 1881 to April of 2011, over three thousand issues of The Phoenix exist on the internet. Upon finding this absolute hoard of content, I quickly decided to explore the changes in the layout of the Front Page over the centuries in order to determine whether the current layout has truly improved upon past iterations.

Therefore, I randomly selected seven issues from 1892 to 2002 and rated them considering  four categories of criteria: aesthetic, readability, diversity of content, and quantity of articles. 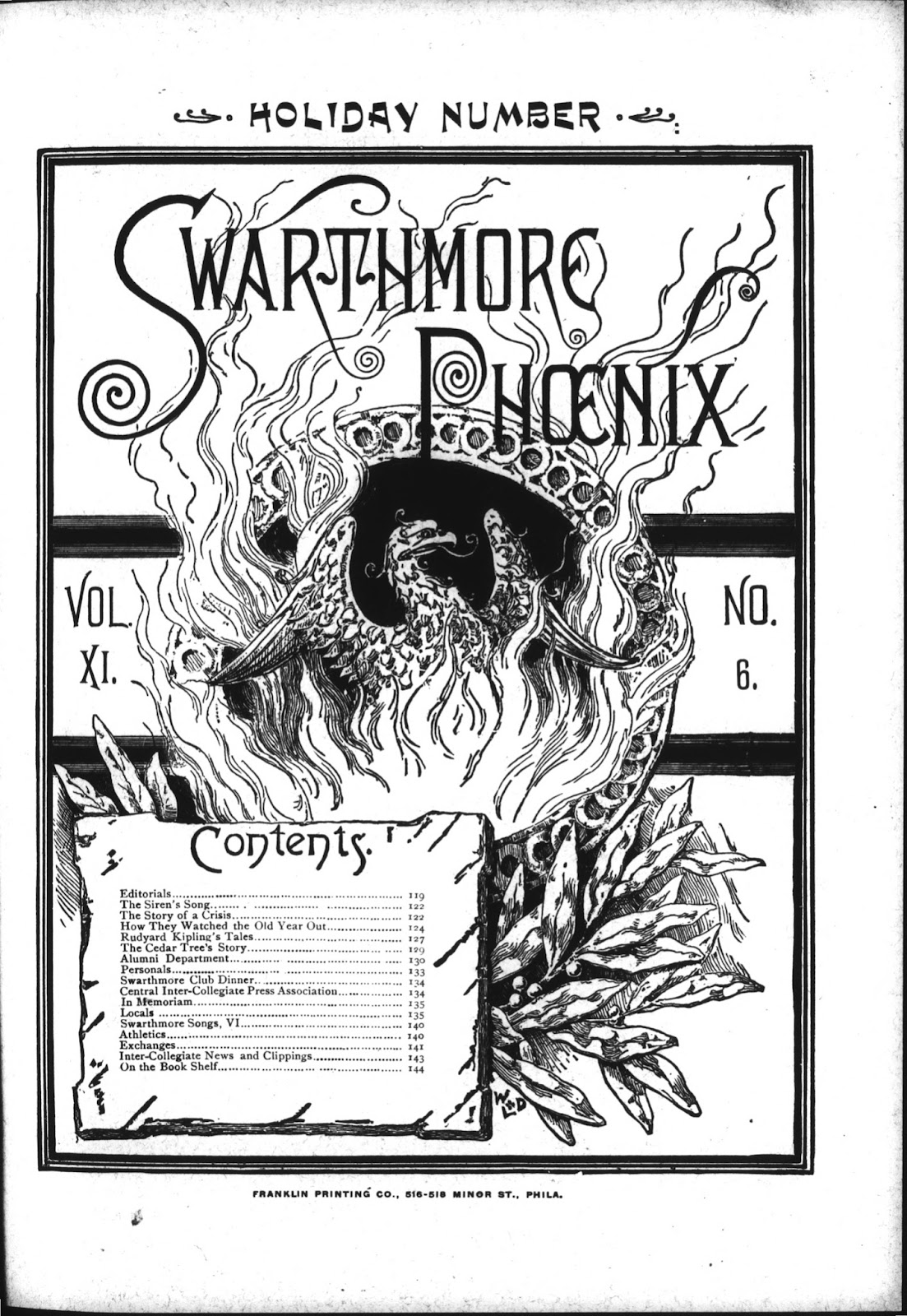 The Front Page of this 1892 issue doesn’t give us much information. It’s highly stylized, and the font is decorated with a multitude of swirls, which I honestly don’t enjoy. An illustration of an actual phoenix covers a majority of the page, and while I can see the artistic merit in it, there’s not much else that it’s saying to me. We’re given an overview of the contents of the issue (something that we don’t do so thoroughly now, but I guess we just want to keep some air of mystery). This Front Page layout is probably the furthest from what we currently see, and I deem that a bad thing. There’s no news headline to catch your eye, simply a promise of “The Cedar Tree’s Story” and “The Siren’s Song.” Overall, 1 out of 5. The year is 1915, and The Phoenix has decided that it’s a newspaper now. This Front Page is complete with headlines and a photo, all the things needed for a successful paper. Just from viewing above the fold, we can see five separate articles, ranging from the results of a sports game to a news report that stretches beyond the goings of the campus community. I think the variety of articles here is solid, and the photo looks professional. However, there are five columns compared to our current six, and the space between columns is noticeably quite tiny. Not a huge problem, but it does lower this Front Page on the readability scale. Overall, 3 out of 5. 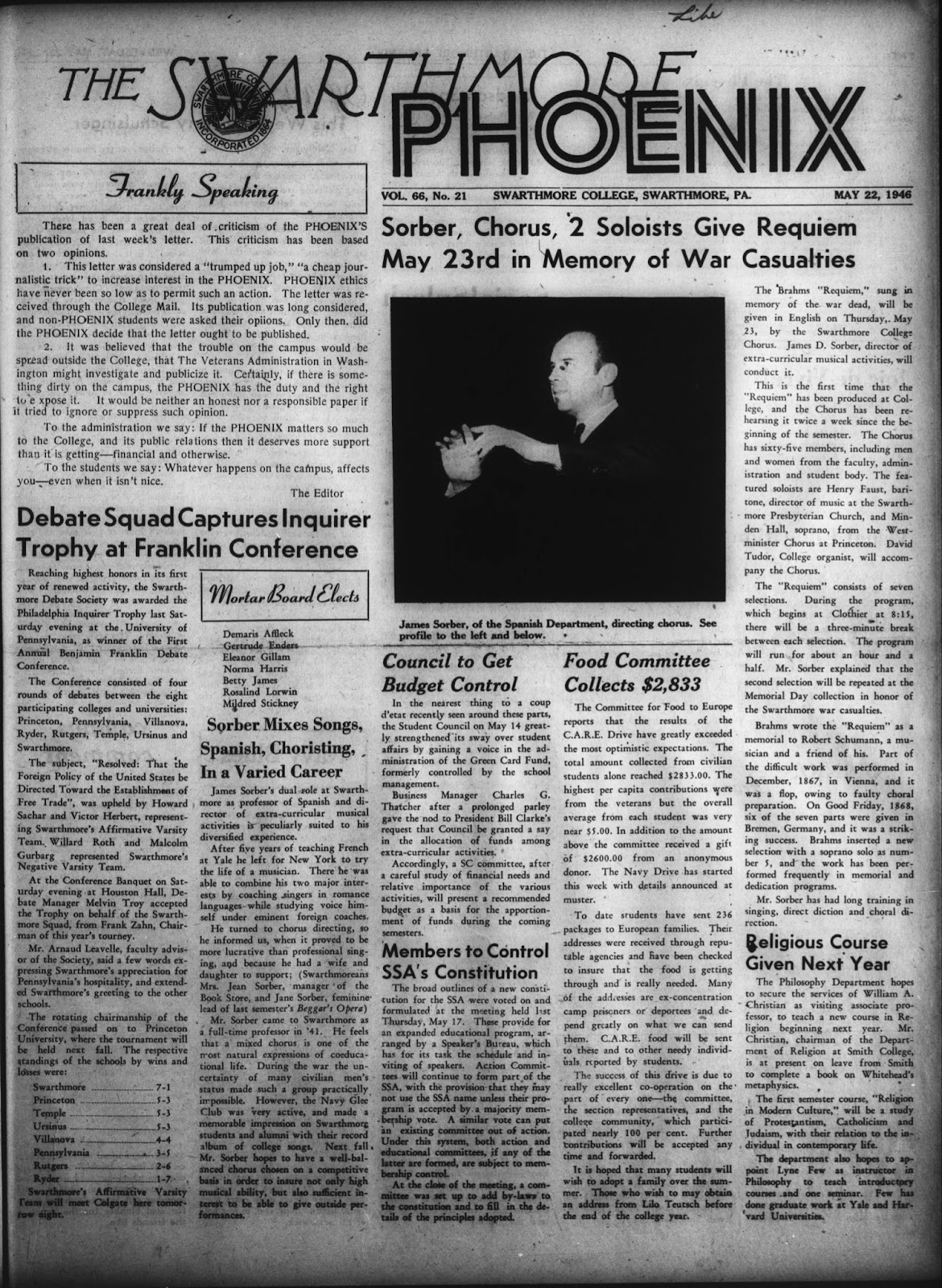 The first thing I noticed about this Front Page are the awful fonts, which makes me so glad this iteration of “The Swarthmore Phoenix” lasted only a few years. Other than the mistakes in taste, the rest of this cover looks pretty professional. They fixed the spacing problem between columns, and I see some drama happening in the top left corner. A “Frankly Speaking” section might be in the current Phoenix’s future. There are seven separate headlines, which seems slightly overwhelming, but upon closer expectation, we can see that some of the articles are just a few paragraphs. Overall, 2 out of 5. I really, really hate the font. 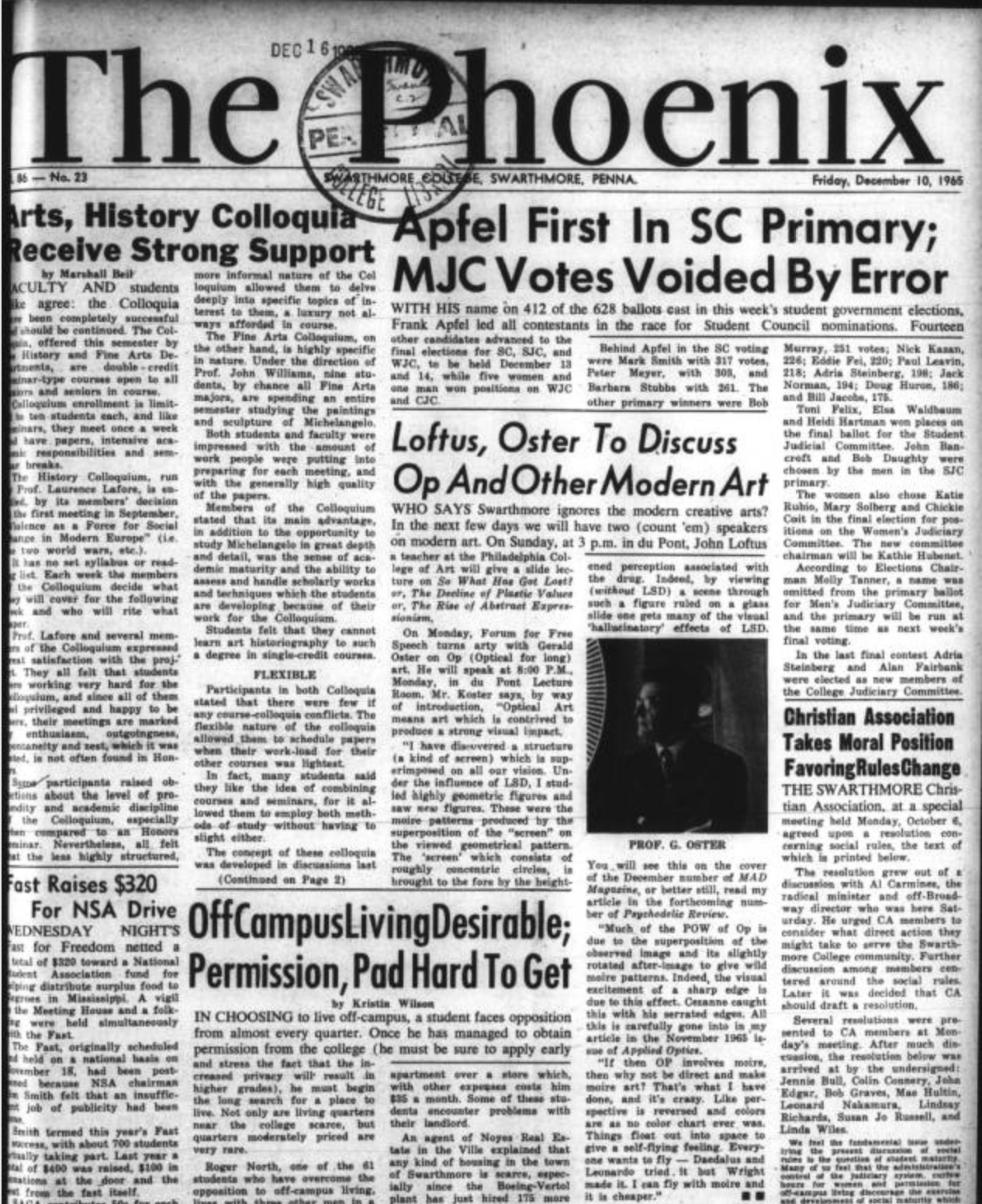 When I first looked at this Front Page, I liked it. The title, in simple but huge font at the top, really grounds this issue. We’re still hanging around five columns on the front page, so I’m starting to wonder if that was just the norm for small papers. The layout looks balanced, but just like the 1946 Front Page, there is too much going on in a single page. There’s only one photo, and it’s so dark that I can hardly tell what it is showing (but I don’t exactly blame the Editorial Board of fall 1965.) I think the combination of several articles and limited photos makes this issue look particularly serious, since the words greatly outweigh the visuals, but all the random lines that try to section off articles ruin this by making everything look clunky. Giving this one 3 out of 5. 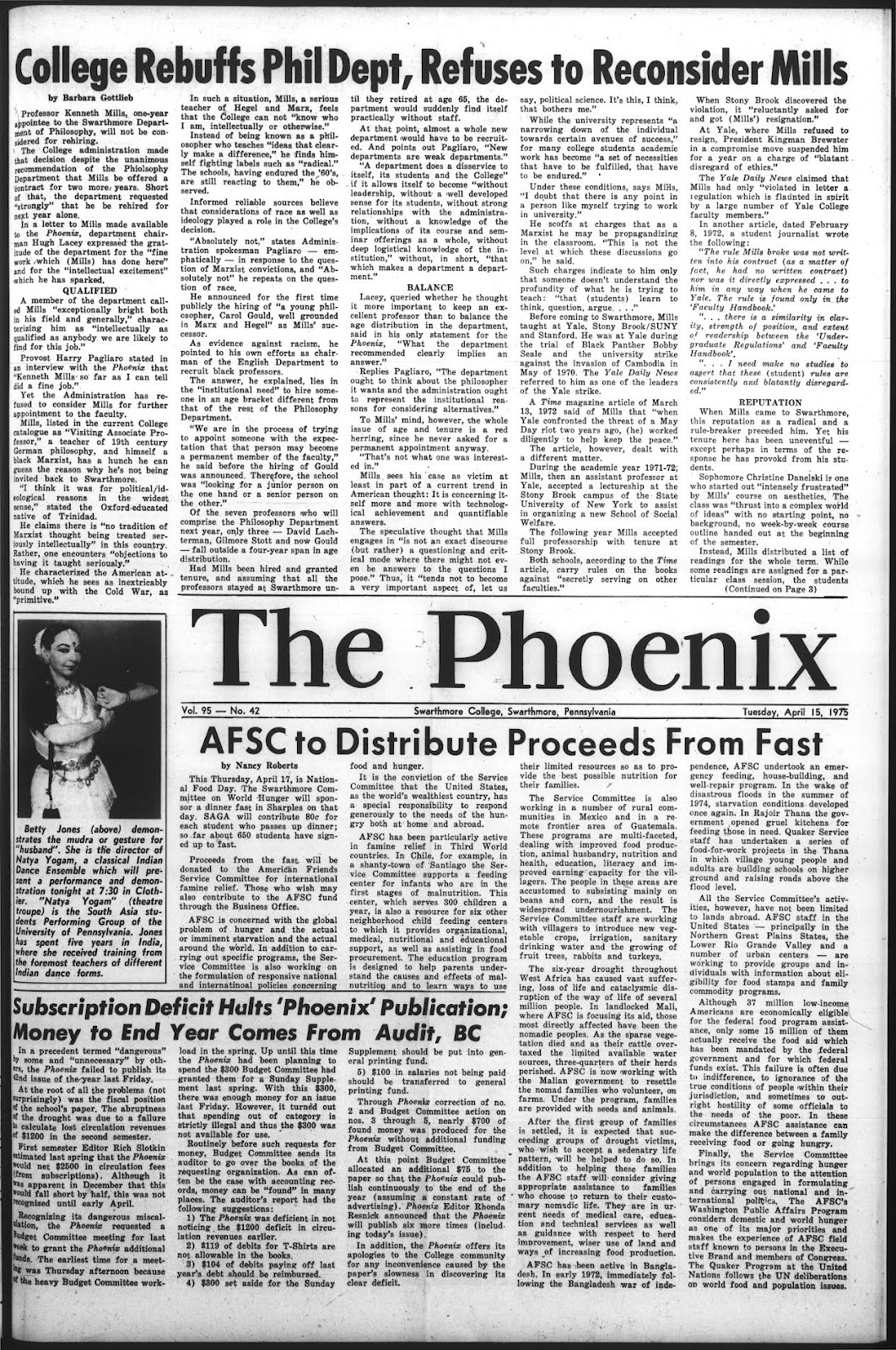 This has to be one of my least favorites, after the 1892 Front Page. Why is “The Phoenix” positioned in the middle of the page? It feels like I am not looking at a Front Page, which is the opposite of what I want to feel. There are a total of three articles on this Front Page, so points for overwhelming me less than usual, but the lack of photos haunts me. I’m sorry, but I’m a visual person! Ultimately, there’s not much about this Front Page that makes me want to read the paper in its entirety, owing to its lackluster visuals, nor do the headlines sound like very breaking-news things. There had to be more going on in the 70’s, right? 2 out of 5. 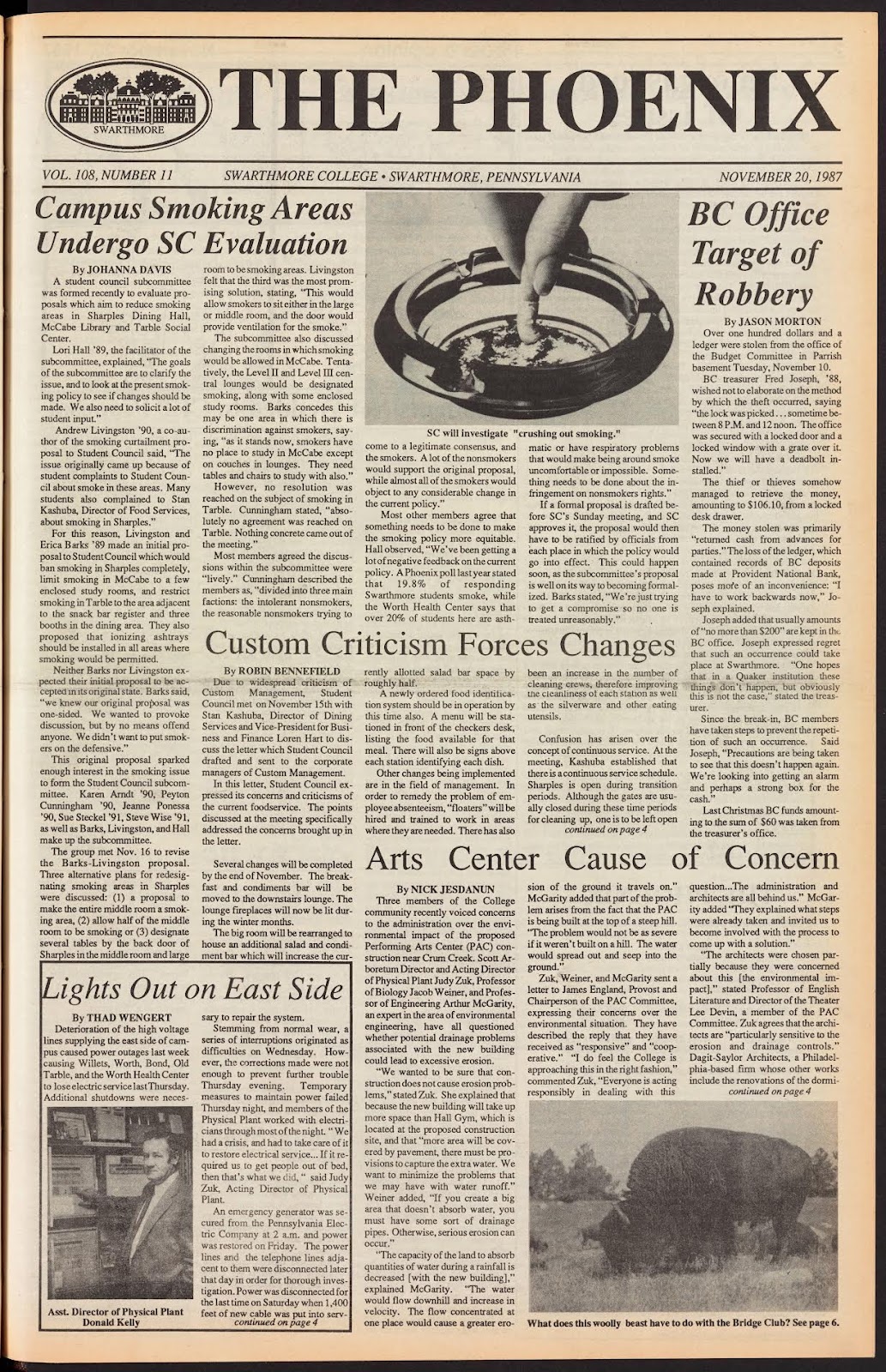 This Front Page knows what it’s doing! It looks so clean and professional, combining a healthy number of headlines with several photos. I do think the box in the bottom left corner looks slightly out of place, but what can you do? The headlines are not particularly creative or descriptive, but they get to the point enough. Overall, the spacing is well done, the fonts are consistent, the page is balanced, and I think “BC Office Target of Robbery” would make anyone want to continue reading. Will be awarding this one 4 out of 5. Did we stop printing a newspaper and switch to a magazine? The jump in format is drastic. The font of the “The Phoenix” is great (or is it just our current font and layout?), but the full-color photos are confusing me. Surprisingly, this issue clocks in at 28 pages, more than twice as long as what we print weekly now. How did they do it, and how did they afford it? I almost want to give this Front Page 5 out of 5 simply because of the sheer quantity of content that composes this issue. This particular design first debuted in January 2000 and lasted until the College Archives stopped digitizing The Phoenix, so it must have been popular. But something about it freaks me out. That simply does not look like a newspaper. 4 out of 5 then.

The Phoenix’s Front Page layout has changed drastically throughout the decades. However, I don’t observe a linear progression of design features. Each Front Page publication reflects the choices and vibes of the editorial board of its time; the layout has its ups and downs, just like life.