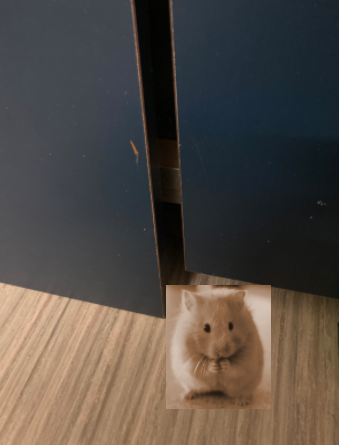 These diary entries have been written from the perspective of a very persistent mouse who keeps visiting my dorm room. I have named him Clovis.

Lots of commotion today, and big, clumsy humans moving about, bumping furniture and complaining about the heat. They all seem to carry a lot of stuff with them; it must be tough being a human. Even turtles carry less on their backs! I wonder why these students have to move in and move out twice a year. Do humans migrate seasonally? Perhaps they’ve come south for the winter.

I had to explain to yet another mouse tonight that I’m a dorm mouse, not a dormouse. I don’t understand what the difficulty is. A dorm mouse is obviously a mouse who lives in a dorm. Just like house mice live in houses, and field mice live in fields, and deer mice live in deer — oh wait, maybe not. But you get the idea. Some mice are just a few whiskers short of a nose, if you know what I mean.

College dorms really are nice places to live. The food is certainly extremely plentiful, and students spill it liberally. My favorite is the microwaveable ramen; it’s the perfect mixture of salt and umami and spice, with a delightful chew to the noodles. They seem to be taking their food into their rooms more often than they used to — I’m not really sure why, but I’m not complaining. I’m beginning to think I might have to cut back on the cookie crumbs, though; fitting into my home underneath the heater has become a bit of a squeeze lately. Oh look, someone’s spilled some mac and cheese by the trash bin over there … hmm. Diet can wait. Mac and cheese demands my immediate attention.

I got a little too daring in my most recent nighttime excursion, and one of those humans noticed me. Luckily, it didn’t seem to do much — it just sort of yelped a bit and stared at me until I scurried under the heater. I guess I’d better lie low for a couple of days. This is one of the few disadvantages of being a dorm mouse, I’ve found; normally, humans (or so I’m told) are supposed to be a diurnal species, whereas mice are nocturnal. That way it works out, see? We party all night and they party all day, and we don’t disturb each other. But these students are very odd — they seem to stay awake during all hours of the night, scratching at their little pieces of paper or staring into their blinding screens. What’s a hapless mouse to do? Also, they always seem to be in their rooms these days, so it’s very hard for me to come and go unnoticed. Ah, humans. Just when you think you have them figured out, they go and mess things up.

Looks like those humans got around to putting out some of those “mousetraps” again. I honestly don’t know why they think those things work. If you were a sensible mouse, would you crawl into a tiny enclosure barely big enough for your body to get at a bit of soggy food that you clearly can’t actually reach? Or go after a moldy crust of bread that’s skewered on a rusty wire waiting to chop your head off? First of all, that bait isn’t even fit for rats, and I should know. Rats have terrible taste. That movie Ratatouille is ridiculous; everyone knows rats have terribly unrefined palates, and that mice are the real gourmets. Second of all, how stupid do they think I am? I mean, really. I can find plenty of crumbs that don’t require me to risk death. You’d at least have to tempt me with a warm chocolate chip cookie for me to put myself in that much danger…oh, and a glass of milk, too. They got that much right, at least: if you give a mouse a cookie, we will indeed want milk to go with it.

I woke up this morning feeling very, very sweaty. My heater home has gotten quite toasty — I think they must have turned on the heat or something. Whew! I’m going to have to go find a puddle to take a bath in. Perhaps humans are cold-blooded animals, like snakes. That would explain why they enjoy roasting themselves and why they migrate south for the winter, according to my earlier hypothesis. They also prey on mice, like snakes. Luckily for me, they are far worse than snakes at catching mice.

Something strange is going on; it happens every year around this time, but I’ve never been able to figure out why. The students are staying in their rooms even more than usual, and there’s a lot of head-pounding and moaning and crying happening. They are also staying awake even longer into the night, staring at their screens and papers. Is this some mid-autumn ritual they have? Anyway, I’m not complaining, because the longer they’re awake at night, the more they snack. It’s been a veritable banquet around here. In fact, we dorm mice like to call this time of year Thanksgiving. The house mice, I’m told, celebrate this holiday around the end of November, but it depends on where you live; Thanksgiving is whenever the food is most plentiful around you.

Thanksgiving has just ended, and goodness, am I stuffed! I think I’m in a food coma right now and it’s addling my brains a bit. I committed the incredibly foolish error of scurrying within a foot of one of those humans and it definitely saw me. I think it might have been the same one that spotted me the first time, in fact. All it did was say, “Hey!” and watch as I scampered to safety, though; luckily, it seemed too tired to do much. Although I did see it putting some cookie crumbs in its mousetrap later that night. A nice try, but, as I said, you’d need at least a glass of milk with that cookie to tempt me. And freshly baked wouldn’t hurt, either. What can I say? I’m a bit of a cookie snob.

Sometimes I wonder if I should change up my life a bit. Maybe I could move to another dorm. Or try out life as a house mouse, or a field mouse. Perhaps not a field mouse — that sounds rather cold, with too many snakes. There’s a whole wide world out there, after all, and I would like to meet some more mice at some point and start a family. At the same time, I lead a comfortable existence here, and I’m not sure that the rest of the world contains easily accessible instant ramen. I’ll think on it, but for now I’m going to sleep. The sun is coming up, and it’s past my bedtime.