Highlights » In Criticism of the Cupcake, the Counterfeit Confection 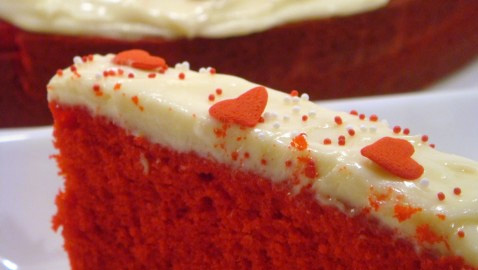 Before I dive into my rant about cupcakes, I would like to acknowledge that cupcakes are an entirely frivolous subject for an op-ed. The world has far more pressing issues at hand than the merits of a frosted confection. Personally, however, I would like to take a break from the oppressive reality of COVID-19 and from the anxiety, fear, depression, and uncertainty that we must all be feeling to some degree. Therefore, I am going to offer my thoughts, not on the best strategies for social distancing or on ten ways to pass the time in quarantine, but on the utter impracticality and ridiculousness of cupcakes.

At first glance, cupcakes appear to be beautiful sculptures of luscious cake, creamy frosting, and artistic decorations. The concept makes sense: if you enjoy cake but want a portable, single-serving version, the cupcake would seem to be the ideal solution. Whoever conceived of the structure of a cupcake, however, must have been up too late the previous night finishing their problem set. With all the frosting piled in an elegant spiral on top of the cake, it is impossible to take a bite of frosting with every bite of cake. You could lick off the frosting first, of course, and then eat the cake, but then what would be the point? The only way to have frosting with every bite is to tear off the bottom part of the cake, smush it on top of the frosting, and eat the cupcake as a sort of frosting sandwich. At this point, the cupcake bears no resemblance to a cup, rendering even its name a false promise. Additionally, when self-constructing this “frosting sandwich,” it is all too easy to drop the cupcake and/or lose some of the frosting and/or spill crumbs everywhere. This seems like an inordinate amount of work just to enjoy a sub-par dessert (more on the sub-par-ness later). Yes, cupcakes are aesthetically pleasing, but I like to eat my desserts, not just look at them. Besides, often the elaborate curlicues and accessories on the cupcakes are more choking hazards than assets; one must frequently contort one’s mouth in unseemly ways in order to eat them. The mere structure of cupcakes is so convoluted that I am not convinced their consumption is worth the struggle.

Besides, cupcakes, with a few exceptions, are decidedly not delectable. Their upper half is a heap of sickeningly sweet goop, little more than flavored sugar, with perhaps a few sprinkles on top that only add to the cloying taste. If I WANT chocolate in a creamy form, I will eat chocolate mousse or chocolate pudding or chocolate ice cream or hot chocolate; I will not eat chocolate frosting, which never even tastes like chocolate anyway. I will not even deign to discuss vanilla frosting, which is essentially an excuse to be lazy and make flavorless, colorless fluff. The same goes for virtually every type of frosting except for cream cheese frosting, which is the most delectable invention in culinary history. In fact, I will not even consider eating a cupcake unless it has cream cheese frosting — in which case I simply treat the cake part as an optional topping for the frosting instead of the other way around. Therefore, cupcake shops would do better just to sell bowls of cream cheese frosting.

The lower half of a cupcake, on the other hand, is often even worse than the upper half. I would estimate that at least 90 percent of all cupcakes in existence (this statistic is supported by no concrete data whatsoever, so you’ll have to trust me on this) possess a cake layer that is, if not flavorless, at least as dry as a desert. While I do not prefer cake myself, I have nothing against an honest, pure slice of cake that you eat on a plate, with none of the inconveniences of a “portable” cupcake and the possibility of easily accessible frosting in every bite. Normal cake, unlike a cupcake, does not attempt to hide its flaws beneath a pile of mediocre frosting; it must stand on its own and therefore is often reasonably tasty. In my opinion, dessert should be a pleasant indulgence: if you are going to eat dessert, you might as well make it worthwhile. A mouthful of sweetened crumbs, half of which tumble onto the ground after a single bite, does not count as “worthwhile” — especially since you have no leftover frosting to moisten the mixture if you did not use the “frosting sandwich” method of consumption for the cupcake. Furthermore, the cupcake is inevitably ensconced in a plastic or paper wrapper, which introduces a new level of uncertainty to the process of ingestion. Should you take off the wrapper at the beginning, or only when you cannot eat any more without biting off part of the wrapper? Is the wrapper compostable or recyclable — and how wasteful is this wrapper anyway? To make matters worse, peeling off the wrapper inevitably robs you of a sizable mass of cake. Granted, you may not be missing much on that score, considering the general inferiority of the cake portion.

Therefore, the cupcake is a veritable host of contradictions. It is supposed to be portable, yet it poses an unseemly amount of dilemmas when you actually attempt to eat the cupcake. It is pleasing to the eye, but the only plausible method of consumption completely destroys that lovely appearance. It is supposed to approximate frosted cake, yet its frosting and cake remain hopelessly isolated, rendering the perfect bite almost impossible. It should be a delicious dessert, yet its components are variously too sweet, too dry, flavorless, messy, crumbly, or a combination of all of these flaws. Cupcakes are like roses: from far away, they seem heavenly and ethereal, promising all manner of wonders. When you approach, they prick you with their ludicrous inedibility. Actually, cupcakes are quite unlike roses in many, many ways, but that’s entirely beside the point. I’m going to blame the bad analogy on the ruinous influence of the cupcake. On a more serious note, I hope you are all taking care of yourselves and your loved ones and that you are somewhere safe and comfortable. I cannot offer anything other than words of support and my best wishes. Wherever you are, however, please practice at least this bit of self-care: choose your dessert wisely. If you need the comfort of sugar and cream and chocolate and butter, by all means seek out a gooey brownie or a bowl of ice cream or a warm slice of apple pie. If you truly crave frosted cake, eat some real cake — or, even better, just a heap of cream cheese frosting. The world of dessert has so much better to offer than the cold comforts of cupcakes.

One thought on “In Criticism of the Cupcake, the Counterfeit Confection”