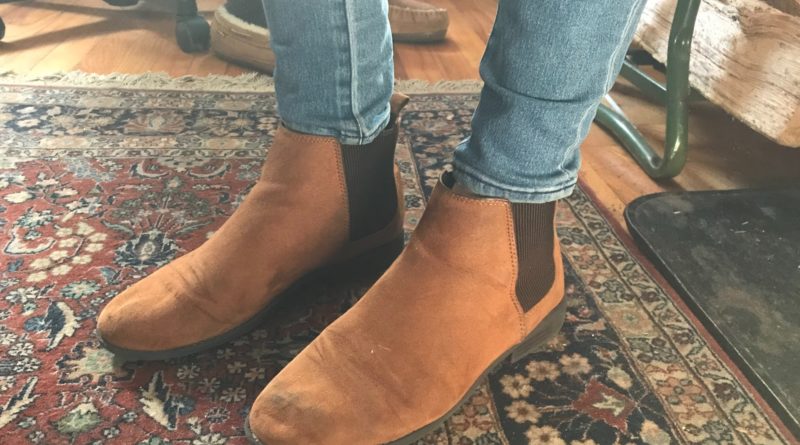 I was dealt some blows by midterms and Swat Plague 2.0 which delayed this article, but never fear! I am back at it again to go where no woman has gone before in my deep dive into footwear, festivities, and human nature.

This time I’m with Natalia Abbate ’23, taking the SEPTA back from the liminal space that is 49th Street Station. Under the shaky fluorescent light of the train car, her brown suede Chelsea boots appear stylish but simple, well-worn but well-maintained. To an untrained eye, they could easily fly under the radar as everyday shoes rather than party shoes, but this writer knows better. Underneath their stylish but practical façade lies a multitude of stories and experiences that have been unexpectedly representative of her time at Swarthmore so far.

Natalia remembers buying her shoes at the Primark near her home in Lexington, Massachusetts this August, saying: “they were one of the last things I bought before going to college.” She grins when she remembers the deeply discounted price she picked them up for, and says she can’t recommend highly enough that other people check out Primark’s shoe selection.

The value Natalia gets out of this single pair of ankle boots is pretty astronomical. She slides them on most days (no zipping or tying necessary) knowing they have what it takes to carry her through each busy day, no matter the weather or the variability of what lies ahead. She says that she finds herself choosing them again and again because their practicality can’t be matched, explaining “I can wear them when I’m working, and I can wear them to classes, and I can wear them to concerts … I wear them all of the places.  Sometimes I wake up and I’m going to put on other shoes and then I’m like, ‘Nope, these are too easy.’”

Chances are you can spot Natalia wearing them as she traverses the far corners of the campus and beyond. She’s one of the brave souls who must make the half-mile trek to and from her dorm, Mary Lyons. She’s remarkably cheerful about inhabiting one of the most notoriously undesirable living situations Swarthmore housing has to offer: ML basement. Unlike the rest of the dorm’s floors, which boast private bathrooms, basement inhabitants are forced to share hall bathrooms, while lamenting their lack of full-sized windows.

But Natalia reflects that “the great tragedy of ML basement is the bugs. We’ve had like six crickets [in the room].” Still, she’s made the most of all of these conditions, wrapping string lights around her room’s exposed pipes, and making a bedside table out of a suitcase. She says she enjoys the “mental distance” between the stress of schoolwork and her new home that living off-campus provides.

Comfort-wise, the shoes have held up to different degrees in different circumstances. They’ve served her well on her sizeable walks, but when she wants to dance, like at the Halloween party in Upper Tarble, they provided only “questionable arch support.” She still recalls Halloween night with fondness, though, remembering that, although at first no one was there, once the party “kicked into gear” she was able to form a dance circle with friends and enjoyed being able to sing along to a surprisingly large number of the songs they played.

Since Natalia sings in multiple musical groups — like Critical Mass, the college’s medieval and renaissance a cappella chamber group, the Swarthmore College chorus, and the original opera, Cassandra — knowing lyrics is a point of pride for her. She appreciates a wide variety of musical genres, and loves playing Disney songs on the pianos in Lang Music and rapping Alphabet Aerobics on demand equally.

Natalia grins recalling the trip she made into Philadelphia a few weeks ago to see a performance by The Weepies, an Indie pop-folk duo. She decides that was one of her favorite places she’s worn her shoes so far.

When asked what she thinks of Swarthmore parties in general, Natalia is appreciative of the fun with friends she’s had so far, but reflects that she doesn’t think the party scene will ever have that “person-in-a-crowd feel … [here] everything is a known quantity when you’re heading into it.”  In her ideal world, “parties are about adventure and you never know who you’re going to run into and you never know what’s going to happen.”

Talking with Natalia, energized by her witty and lively energy even when she’s getting over a cold and indulging me asking her weird questions about her shoes, I feel completely confident that she has already started contributing to that positive sense of adventure she so values everytime she shows up at a party, Chelsea boots and all.

With her many different activities and friends — from Dare2Soar tutoring to opera, from modern dance to computer science classes, she is already interacting with and bringing together people with vastly different interests.  She loves to think about recurring themes and intersections within her many different courses and activities. Natalia’s talent for finding and forging such academic and social connections might even end up extending to a French and psychology double-major, but as a first-semester first year she has plenty of time to figure it out.

When I ask how these shoes might be representative of her on a deeper level, Natalia is ready with the psychoanalysis. She realizes that because she bought them right before college, “they have become a visible marker of something in my life that exists now that didn’t exist before” and they have become meaningful in symbolizing and creating her new college identity.

But then she mentions that she used to wear a pair of rather similar olive green zippered ankle boots, reflecting on her choice to wear these new shoes that: “It’s not a radical reshaping of my style, but a slight variation. I’m not scrapping my old identity, but I’m creating a slightly new one.”

When Natalia puts on these boots, she is embracing both her pre-college identity and the new version of herself that she is creating at Swarthmore one stride at a time. I have no doubt that these new shoes will soon become imbued with memories of adventures and a colorful variety of experiences she wants in parties and her college experience at large.

As the semester winds down and you’re searching for defensible ways to put off studying for your astrophysics test or writing that pesky final paper, here’s a good one: look down at your shoes, party or otherwise. Why are you wearing them? What do they mean to you? How might they be a representation of you?  Every choice, especially choices so deceptively small, can open up worlds of insight into our deepest desires, and how we identify ourselves.