Arts » Doug Varone and Company and Students Oh My 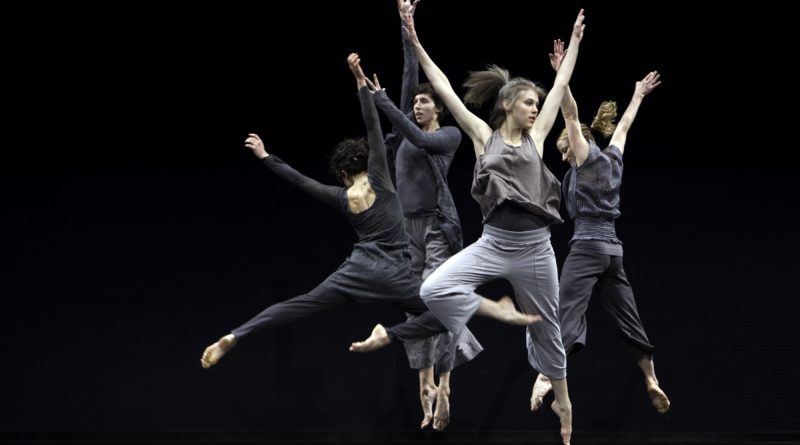 Last weekend, The Cooper Series presented Doug Varone and Dancers, who, in partnership with the Swarthmore Music and Dance Departments, showcased a dance piece that had been lovingly worked on and practiced for nearly semester-long. After a week full of workshops and practice, Doug Varone and Dancers was set to perform on the LPAC mainstage with a dozen of Swarthmore’s finest dancers in tow. After nearly a semester’s work of drills and choreography, the students took the stage with the pros and staked their claim in combinations with the professionals.

The show consisted of two whole pieces by Doug Varone and Dancers, one of which included a section entitled “mass,” which was performed solely by Swarthmore students. The whole first piece, “in the shelter of the fold,” portrayed a number of relationships, physical and emotional, that the dancers performed with ease, power, and a natural connection to the other dancers on stage. In contrast, the second work “LUX” being entirely performed by Doug Varone and Dancers, was more joyful and playful with dancers flickering on and off stage like fireflies, not stopping for a moment’s rest. The two pieces came together to weave a powerful tapestry about the presence of bodies and the momentum of movement which were stunning to behold.

Students went through an audition process and were sorted into two casts learning the same material. One of the casts performed at the Doug Varone show and will be reprising the piece for one of the two nights of the Fall Dance Concert, while the other cast will be performing on the other. With six hours a week spent on the choreography, the dancers worked rigorously to learn the intricate and multilayered dance. It was pretty intense but bonding for the students. Atticus Maloney ’22, a dancer in the piece said, “The learning process was collaborative and for the most part self-lead. Our amazing teacher Stephanie would teach us the choreography, but it was up to us to polish and connect the movements.”

“in the shelter of the fold” told an intricate story of interpersonal relations and bonds stronger than just the physical. The stage opened on seven of the eight-people cast in stretch jeans and short cut shirts. They began to move in chaotic coordination around each other, managing to all be separate in action but still coming together at times and pausing to create a complete picture. The first movement was by far the most intricate, with units of people moving in harmony and flowing like an ocean current across the stage, conserving momentum without any meaningless motion. Next, there was a smaller piece with two men dancing with and against each other, showing powerful connection and coordination across the stage. Then, a trio of sharp, gestural dancers followed by Doug Varone himself and another dancer portraying a beautiful study of unity.

Finally, it was time for the students’ piece, which was the most momentous of them all. As the audience expected with the title, ”mass” was a dominating work that hurled dancers from movement to movement with practiced coordination and accuracy. The twelve of them brought more natural movements to the stage and the extra people on stage made a difference. The students moved in time with the music and swelled to a crescendo then broke, leaving a stunned audience in its wake. The work they had done was clear and they danced their hearts out and received a raucous applause. Afterward, the students left the stage to reveal the solo dancer for the final piece: a dancer trying to find the style of movement shown earlier without the extra bodies. It was haunting and powerful, wrapping the piece up with a message of the importance of community and those around us.

After intermission, “LUX” began. Beginning with a single dancer on stage and a circle of light on the backdrop, the dance was playful and almost fairylike. Over the 25-minute run time, the moon-like image slowly moved up the back of the stage while every dancer splashed on and off, maintaining constant on-stage motion with leaps, twirls, and lifts. After a more morose sound track in the first half, consisting of atmospheric sounds, the song was a pleasant change which made this piece enjoyable to sit back and enjoy the magic of it.

The music in both of the dances was unique and striking. As mentioned the music in the first was a mix of atmosphere music from a mix of artists including Lesley Flanigan, Julia Wolfe, and David lang. The music was not used as a set of beats to go by, instead it was a tone that was set and the movement embodies that tone and expanded on it, which heightened the moods portrayed. For “LUX,” Varone used “The Light” by Philip Glass which was more classically inspired and used as a roadmap for the dance itself. When the music swelled, the dance increased in fervency, and when the music diminished, the dance became more tame. But neither the movement nor the music, creating a momentum that was pervasive throughout the whole piece.

Doug Varone is a dance choreographer well-renowned for his 30 plus years of choreography and work. He and his company have performed all over the world and have earned many awards for their work. The experience for students working with this famous company might have been intimidating, but the swatties took it in stride While talking about his experience with the company, Maloney said, “The process taught me what it means to be a dancer and what it takes to collaborate at the highest level. Every movement in this piece relied on others for its completion, the visceral connectivity of the piece has taught me lessons that I will take with me both in and out of the studio.”

He concluded by saying, “Doug and all the company members were absolutely wonderful. I was afraid of going into this experience that it would be terrifying to work with such accomplished modern dancers. To some extent it was, but they minimized that effect by really expressing from the get go that they were there to help us improve the piece and perform it to the best of our abilities.”