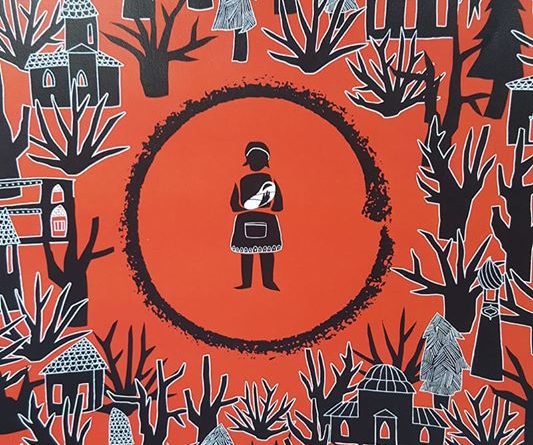 Last weekend, a select group of student actors blossomed onto stage. In a scaled-down wooden colosseum-like set made for the play on the LPAC Pearson-Hall Theatre, a heartwarming story was told about a town in the Caucasus mountains in the post-World War II Soviet Union. The show wove together various tales of romance, war, and power into a tapestry that captured the attention of the audience.

This year’s Production Ensemble class proudly performed “The Caucasian Chalk Circle” by Bertolt Brecht this past weekend. The twelve actors and 39 crew members all came together to create a fabulous show. “The Caucasian Chalk Circle” started with the actors walking on stage, not yet in character, interacting with the audience through conversation and a warm welcome. The play finally began when the cast sat down in character as farmers and workers of the Soviet Union to discuss land ownership. When the deal is concluded, the Singer (Neil Steinglass ’23), a storytelling musician, enters and begins to tell a story. The rest of the play becomes the story he tells.

Each cast member in the show played five roles on average, meaning that the same faces came in and out. Two actors, Yuying (Shell) Rong ’21 and Christine Mason ’23, played ten parts each. The transitions from one role to another were flawless due to the incredible acting and hard work of the cast, which made every character shine on the stage.

The plot begins with a coup against the Grand Duke (Rong) and his governor Georgi Abashwili (Shail Modi ’21). After the governor is beheaded by rebel soldiers (Rong and Camille Klein ’22), the governor’s infant son Michael is abandoned by his mother, Natella Abashwili (Grace Griego ’22). Natella’s maidservant Grusha Vashnadze (Lauryn Smith ’21) rescues Michael from the rebel soldiers (Youogo Kamgaing ’22 and Griego), and embarks on a haggard journey to the safe and remote countryside home of her brother (Griego). Grusha marries a terrible man, Jessup (Alex Lehner ’22), in order to remove the suspicion around Michael being illegitimate and stays in the unhappy marriage to let the child grow up safely.

Eventually, Grusha’s ex-fiancé Simon (Mathew Lucker ’21), finds her and confronts her. In this emotionally-charged interaction, the Singer vocalizes the frustrated feelings of the lovers for them and interprets the lovers’ silence to the audience. Then, the guards find Michael and take him back to the city where the former duke resided. The first half of the play was marked by the extraordinary interactions between set and actor. Grusha’s arduous trek from the city to the countryside is presented through the actors’ climbing up and down the set; at one point, when she is being pursued by the soldiers, the audience sees her and the soldiers engage in a cat-and-mouse chase around the top section of the round set. The emotions expressed in the first half were also mediated through a lot of music.

After intermission, the audience is introduced to Azdak (Modi), a village-scribe-turned-judge who disregarded the old royal rules and often humorously favored criminals. Michael Abashwill, now played by professional child actor Donovan Louis Bazemore, is brought up before the court where Grusha and Natella fight over custody of the son. Natella, who wants the estate Michael is legally heir to, claims her ties by blood makes her the parent while Grusha believes the fact that she raised the boy will give her custody. This culminates in the titular test of the chalk circle in which the two mothers are told to pull the child out of the center of the circle towards them. For two rounds, Natella wins by viciously yanking Michael out of the circle while Grusha lets him slip away, unwilling to hurt the child she had raised. Azdak then gives custody of the child to Grusha for not risking tearing her son apart like Natella. He proceeds to dissolve the estate, turn it into a garden, sign the divorce papers for Grusha and her husband so she and Simon can get married, and disappear into the sunset, never to be seen again.

“Caucasian Chalk Circle” premiered in 1948. Brecht was a German playwright who was considered progessive for his time and faced persecution from the Nazi party, leading him to travel the world and gain different perspectives for his theater. Brecht wrote this play so that actors often had chances to act as themselves, breaking the fourth wall, and songs were often written for the piece and performed on stage.

Steinglass, who played the Singer, really did sing and pluck the strings on the guitar on stage, interweaving a musician’s touch into the fascinating plot. Dakota Gibbs ’19 accompanied the show with a percussion box and played the guitar when Steinglass could not. The music, composed by Visiting Assistant Professor Elizabeth Atkinson with original lyrics from Brecht, was based on folk tunes, combining humor with heartbreak and giving the show a magical, folkloric feel. It was put to its best use when characters, instead of soliloquizing, sang in their most intimate or vulnerable moments. The play was translated by Eric Bentley, and some of the lines used archaic language which felt straight out of a storybook. The original German play was also written with older, funnier sounding grammar and sentence structure, and it’s impressive to see how well it was translated and performed.

The show was generally set in the round central area in the middle of the set, with occasional movements occupying the rising audience seats and the walkway on top — the stage was essentially a bowl with guardrails. The whole structure was made up of unpainted wood, which also added to the folk theme and rustic setting. There was also a feature after intermission where the audience in one section was asked by a few cast members (Klein and Ari Liloia ’20) to sit in the center and turn to watch Azdak hold a court where they were just sitting, breaking the fourth wall, and dynamically changing the way the show was perceived.

I found the play wildly enjoyable. While there were a few wrinkles, the personal connection actors invoked in the audience at the beginning of the play made me feel at home, and the story was beautifully told with passionate acting that felt rich to see. True to Brecht’s style, the focus was on the story, with many passionate moments shared in song between the characters. The play was charming to the extreme and sensitive too at points. It rewarded engagement with wonderful songs and great jokes, and I found myself laughing and crying along with the characters on stage.