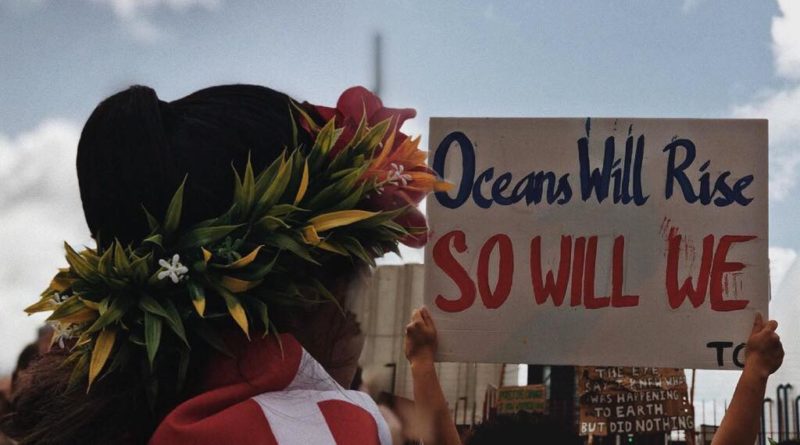 “Make Earth Great Again” painted on canvas, held by a man in his 40s. Teachers clutching permission slips next to students who joined the cause. The raucous chanting as we marched down Philadelphia’s Market Street. The Global Climate Strike may have empowered each protester with vigor and hope for climate justice — but to me, it wasn’t enough to mask the inferiority and helplessness I felt an hour just before that.

“There’s no point of protesting,” my friend remarked.

His brusque sentiments made my eyes widen in disbelief. It made me ask, “How was it so easy for him to say that?”

His ability to utter those words came from privilege — a privilege that I do not have.

I come from the tiny South Pacific island of American Samoa. Climate change is nothing new to me. It wasn’t until middle school that I learned what the phrase meant, but I knew, from a young age, that my island was under attack by a faceless monster. As I grew older, the monster grew stronger. My village’s shores gradually eroded away, and the exquisite coral reefs I once swam by finally lost all color. For Pacific Islanders, climate change isn’t a political fad — it’s actively erasing our future.

According to a report published by the Intergovernmental Panel on Climate Change, small island developing states are at a disproportionately higher risk of adverse consequences of global warming. Small islands like Tuvalu and the Marshall Islands, for example, are expected to quite literally sink in the next couple of decades. Now, they face the pressing problem of displacement — families are forced to flee, leaving their lives and histories behind. Not only will they need to seek refuge to survive, but they also face the daunting task of keeping their language and culture alive. And yet, barely anyone knows, not only of our existence, but how this plight is leading to a mass extinction.

Why is this? Perhaps preserving the 76-square-mile island I call home pales in significance compared to more “developed” nations. Or maybe our activists of color don’t fit the Western narratives of the “white man” saving the world. Do people just not care enough about the veritable climate genocide that will soon take away my people? But we care. We see our fate approaching every time we step outside, and see our paradise deteriorating into nothing more than beautiful memories. While the rest of the world relishes in the privilege of ignorance, we are immersed in fear — constantly wondering what the next decade will take from our still-developing islands.

When you invalidate a social movement, you’re telling the victims to acquiesce to their impending doom. Asserting that our efforts are “pointless” perpetuates the systemic oppression that has silenced — and still continues to silence — communities like mine. This silencing exists everywhere. Due to the lack of cultural representation in government, mass media, and higher education (yes, even at Swarthmore), too seldom has there ever been platforms for the people of Pasefika to effectively communicate issues to the world.

So, while you may see our protests as a “pointless gathering for people to whine,” I see it as a way to finally speak. And I will not be silenced.

This is the point of protesting.

It’s to make the world recognize our existence and the threats contributing to the erasure of it. It’s to provide the much-needed platform for marginalized communities to voice their perspectives to officials who belittle these issues. It’s to foster relationships with allies who want to step outside their own privileged experiences to fix social inequalities.

Indeed, protesting itself does not directly guarantee immediate change. Just because a million people ask for climate justice doesn’t mean the government will actually do it, especially in this current administration, whose leader has explicitly undermined protests and activists. But it is integral that we understand that protesting is not the ultimate solution, but rather a necessary step to enact in this nonlinear fight for social change.

We saw this last year during the protests that led to the ban of fraternities on Swarthmore’s campus. After a four-day occupation and pressure to dismantle, both fraternity groups voluntarily disbanded even before the official ban. Despite the lack of immediacy in administrative action, the protest effectively worked to help destruct a symbol that served as a reminder of racism, sexism, and homophobia. The power to raise awareness, incite social change, and give voice to the voiceless is inherently why protesting matters.

So before you disparage the idea of protesting, please do three things. Acknowledge the power structures that grant you the privilege of ignorance, recognize that all social transformation began with protest, and finally, understand that for many marginalized communities, protesting gives our history, our cultures, and our people a chance to survive.