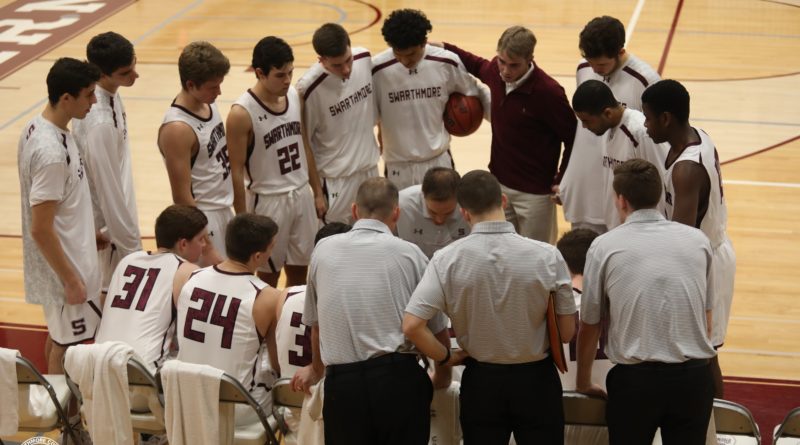 The team enters the 2019-2020 season ranked first in the country, beating out their NCAA Championship opponent University of Wisconsin-Oshkosh for the top spot. The Garnet boasts an impressive group of twelve returning players and six new first years.

The team graduated two seniors, including All-American Cam Wiley ’19 who was the team’s top point scorer averaging 15.2 points a game. Wiley was also a key playmaker recording an astounding 134 assists last year, the most in program history for a single season. Despite the loss of Wiley, Swarthmore will return four of their five top scorers, including captains Conor Harkins ’21, Zac O’Dell ’20, and Nate Shafer ’20 to fill Wiley’s role. Harkins, O’Dell, and Shafer all received Centennial Conference honors, including O’Dell’s Centennial Conference Defensive Player of the Year.

With the unparalleled success of last year and the return of many key players, the team is expected to perform at the highest level.

“Our team will probably have a lot of expectations from everyone, but I think we do a great job of just zoning those expectations out and focusing on what we can control every day in practice and in games, said Harkins.“Last season was great and a huge success, but we know that this year will be different and bring on different challenges that we will have to face.”

“Fortunately, we have always focused on our own standards, rather than on the expectations that other people have for us,” said Kosmalski. “We hold each other accountable to our standards every day and as long as we stay consistent with that, outside expectations shouldn’t affect us.”

A core aspect to the team’s success is their dedication to not only the sport, but to each other. There is a strong team culture that is supportive but demands the best of every player on the roster.

“This year, like last year, we have a really close group of guys who hold each other accountable, and I think when you have that sort of bond within a team it makes the entire process much more fun and rewarding,” said Abass Sallah ’21.

George Visconti ’22, one of the returning top five scorers, emphasized the player’s desire to give it their all no matter what form their contribution to the team took.

“I want to execute my role on the team to the best of abilities, so I can give my team the best chance to go as far as we possibly can,” said Visconti.

The incorporation of six freshmen into the Garnet’s roster will be essential to their success, and the upperclassmen have taken on the responsibility to help the first-year’s transition to collegiate basketball.

“It is very hard for the freshmen to get acclimated into our system, and it just means that the upperclassmen have to help them out even more at the beginning of the year,” Harkins.

Thus far Coach Kosmalski has been impressed with the freshmen’s progress.

“We have a big class of six first-year players and they are all learning rapidly and improving daily,” said Coach Kosmalski.

Swarthmore Men’s Basketball prepares for a long season no doubt filled with lots of great games in Tarble Pavilion including intense conference play against rival Johns Hopkins. The team’s zeal for the upcoming games is apparent and Saturday’s game versus Eastern will provide their first test.

“For me, the most exciting part about this upcoming season is the chance to get to compete every day with a group of guys that I love,” said Sallah.