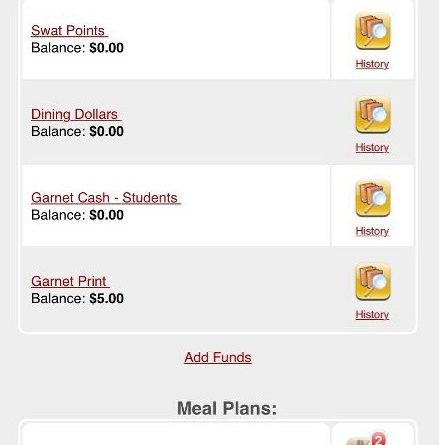 It was November. Who was it? Us. What was it? Entrapment. A new game to assert one’s dominance: depleting every scarce category on our OneCards. While more frugal students might use their meal plans as a way to learn responsible financial skills, we figured this was the most optimal time to live life as privileged college students enabled by an ultra-wealthy institution.

The race was on between Eva and Sage, and we did everything possible from eating Essie’s trail mix every night (Eva) to ordering migraine-inducing, ultra-sweet smoothies from the Science Center twice a week (Sage) to get closer to our goal. Spending excursions to Bamboo Bistro became commonplace and we competed for larger orders, begging others to let us order items for them. When the check would come, an American Psycho-esque OneCard smackdown meant our stupidity lined the Asian fusion establishment’s pockets. We learned what you can and can’t use Swat Points on; for example, you can use your points to get a Bamboo Bistro shirt but not a four-pack of AA batteries from the campus store.

By finals week, however, our manic race to zero points reached its climax. Eva, during a visit to the campus store, managed to deplete her Swat Points to a meager $0.03 with a purchase of fast-acting tylenol (she proudly kept her receipt). Sage, on the other hand, straggled at $2.09 Swat Points after buying vegan almond milk whipped cream. He did manage to get down to $0.61 Dining Dollars with all the Essie’s spending.

During a visit to Essie’s one fateful night, Sage loyally vowed to get rid of all his points –– down to the last cent. With a combined purchasing power of $2.70, we fruitlessly scoured the store for items that would evenly exhaust Sage’s finances. We probably read each and every pricetag in Essie’s, hoping to find the item that would finally bring Sage over the edge. In the end, though, we decided to buy a coconut water (unsweetened) for $2.80. Ten cents short, Sage had to pay the rest with his debit card, but, as of December 13, 2018 at 9:05 p.m., Sage won our heated battle.

While celebrating in Essie’s, boasting about Sage’s newly-earned privilege of being pointless, we came to realize that we still had to waste our five dollars in Garnet Print cash. Immediately we dashed through the cold to the Media Center, only –– to our greatest disappointment –– to be told that printing posters is free. Yet again enabled by Swarthmore’s massive endowment, we resolved to printing a poster of people doing laughter yoga. Even as the poster slowly churned out of the printer, groaning at every dark tone, we still couldn’t believe that it’d been free. What immense power we had just unlocked!

The printing didn’t stop there. After watching a sped-up, high-pitched version of Party Monster, we craved more chaos. Neglecting to bring jackets, we sprinted up the hill from Willets to the Media Center, eager to abuse our new-found power. This time, however, we printed something that perfectly harnessed all our hysteria that had built up during our OneCard challenge. Giggling as we ran back –– Sage in his neon monster slippers, Eva in her sandals and socks –– we, yet again, had another accomplishment to boast about. This time, rather than a weird bragging right (Sage with his zero points), it was the joy of free printing.

Our high didn’t last long. During a morning soirée at Vicky’s later that week, Eva couldn’t pay for the fried muffin she had ordered (against her better judgement). In the end she was glad she forced her friend on Garnet Plan to pay for it — she didn’t want her own money to go towards a muffin that kept her nauseous up until 5 p.m. Similarly, that Saturday, we both desperately craved Bamboo’s scallion pancakes. Luckily, we had friends on the Garnet Plan that were more than happy to pay for us. Except that eating on other people’s dime didn’t really give us the same rush as when we incessantly spent our own fake money. At least we quickly discovered that meal passes from Sharples are free, and that Bryn Mawr always has better dinner.

We wish we’d been on the Garnet Plan.