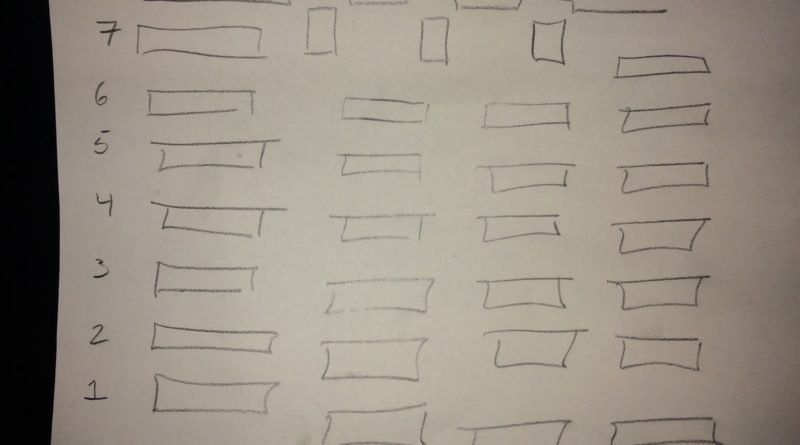 It was a rainy week in December of 2016, definitely not good baseball weather. It was a normal day, nothing out of the ordinary. The clock struck four and people shuffled out of their seminars and to their respective activities, maybe going home to take a nap or to stop by the Matchbox. Athletes descended upon the fieldhouse, like most days, ready to run around and practice their extremely important sport. But some baseball players opened the chamber where they keep their equipment and, to their shock, there was nothing there. Where was it?

The words “Occupy A1” ring in the ears of upperclassmen at Swarthmore. They send chills down spines, make people look over their shoulder as they walk home at night. At times when the wind rustles the leaves in just the right way you can hear the whisper, “Who did the bats…”

The events that took place on December 6, 2016 created a quake that shook the very ground students walked on, a chasm that still lies just beneath the surface. But first, let’s start with what we know.

In the Fall of 2016, emotions were running high. The enthusiastic buildup of a hopeful presidential election, followed by crestfallen mouths agape at a screen in Trotter as state after state turned red. Rumors of supposed showdowns at parties. Scandals plaguing campus journalism for months.

New conversations began to emerge during this time around our role in the college, our role in the world. Groups met and lamented. People consistently stopped and asked “How are you?” Hugs were had. Tears were shed.

Threads of connections between people emerged during this time as deep divides bubbled up to the surface. People were frustrated, people were helpless. As emotions stirred, a dynamic as old as time felt stark against this sociocultural backdrop: Why do all the athlete boys sit at A1?

One walk through Sharples at peak time and you’ll see it. The main room is best understood as a grid system: the row on the compost side is A, B, C, etc. as you read the room left to right. Look below.

Maybe things have changed (sticky tables, new chairs) or maybe they haven’t (hordes of male athletes). But in the Fall of 2016, A1 and A2 were emblematic of the male athlete dining experience.  Why? Who knows. Maybe the air is better on that side of the room. Maybe they need quick access to milk and Powerade. But nevertheless, their claim to A1 and A2 seemed to arrive with the conception of the college itself. Relentless, immoveable, the first sight when walking into the main room was athlete men practically feasting off of their lacrosse sticks. Their voices carried throughout the mainroom — shaking it to its very core.

Then, an idea, or moreso a joke of an idea, emerged. In the post-election fog, rage, despair and perhaps naivete were brewing. Why do these guys get to sit at A1? Maybe other people want to sit near the trash. What if a bunch of women sat there? What would happen? Would the walls of Sharples Dining Hall crumble before our very eyes? Only one way to find out.

A Facebook group, entitled “fuq the fratriarchy” blew up over night. An original 30 attendees became 200. Was it a joke? Would anything really happen Monday at 4:30 p.m.?

Yes. The tables were sat at. It was a sight to see: music playing, huge amounts of women all chatting over the dinner tables, so close to the garbage that they could simply lean back to toss their garbage out.

The male athletes, confused, angry, but ultimately unharmed, had a meal at B1. The change-up was significant, even if only for one day. A tide had shifted.

After the event, an article for the Phoenix was released, coining this soon to be historic meal as “Occupy A1.” With an obvious tinge of irony, it documented something funny that happened on a relatively uneventful campus. The hope was that nothing would be taken too seriously. But in a fashion true to Swarthmore, the overwhelming instinct to sweat the small stuff took over. Comments by alumni and students alike flooded the article’s online presence. I have chosen a few to reproduce here:

“Why would one group of students intentionally pissing off another be bringing swatties together? Only like-minded swatties were brought together, and the laughs had were obviously at other swatties expense. Maybe one could speak of creating connections and community if the swatties in question had sat with the jocks rather than in spite of them.”

“Congrats, you sat at another table. Want a cookie?”

Yes, actually. Mind grabbing me one of the vegan ones?

Facebook exploded with comments. Most were comedic, all acknowledging the absurdity of the act. Although it held literally no correlation to the real world whatsoever (the act of explaining the A1 cafeteria dynamic felt too High School Musical to even take seriously), the act seemed to disrupt the normal ecosystem. And even if no one admitted to caring about it, it seemed to be the topic on everyone’s tongue.

This build up lead to the incident that brings us here today. On a seemingly ordinary day, December 6, 2016, 22 baseball bats were taken from their crate and arranged to spell out the words “Occupy A1” on the baseball field, with 34 baseballs dotting a circle around the phrase in a remarkably creative touch.

The photo emerged on Facebook around 4:00 p.m. and, before anyone knew it, Facebook discourse erupted. Opinions were flying.  Who was to blame? The actor of the deed or those who prompted it? Can we separate the act from the cause?

The act allegedly caused “thousands of dollars in damages,” claims the original poster of the photo. I don’t know much about baseball bats, but apparently mud can really fuck them up, especially when provocatively arranged.

The divisiveness alone of the seating arrangement in Sharples led to a High School Musical level of separation between groups. If we enjoyed life a little more, perhaps someone would’ve popped, locked and dropped it on top of A1. But it seemed that the sentiment truly was no, no, no, we stick to the stuff we know.

Now let me mention what we don’t know.

After the incident took place, a report was filed with Public Safety, and an investigation allegedly ensued. Michael Hill,  head of public safety, was even quoted saying, “We will make every effort to identify the responsible individual(s). If you or any of your readers have information that would aid in the investigation, please let me know.”

We also don’t know the exact time in which the deed could’ve been done. How much time would it take to move 22 bats and 36 baseballs? How many people would it take? Who would even know where that much baseball equipment is kept?

We think, but cannot yet confirm, it was discovered around 4:00 p.m. on December 6, 2016. Had anyone been by the field until then to see it? How long was it out there before it was discovered? How much time passed between the discovery of the message and the posting of the photo? Were there cameras? Has anyone seen the footage?

I cannot graduate until I know the truth.

Almost three years later, as my time here comes to a close, I need to know what happened and who was responsible. To separate the myths, the legends, from reality — to find out if such a distinction is even possible. And I need your help, reader, as I examine the pieces, interview the suspects, and dig deep into the halls of our collective memory, with bravery and rigor.

And yes, in 2019, I am also left wondering, how could an event like this happen? And why did it happen?

Can we understand the bats as a symbol, a metaphor, even a battleground of campus politics and culture wars? A contested site of what is acceptable protest? A relic of the chaos and confusion of that horrible, horrible Fall?

Where were you on December 6, 2016, reader? Where are you now? Can we only understand the present through this excruciating look at a past we all hoped to forget?

Or do the bats — and yes, even this column — point to an unsettling truth about Swarthmore and its inhabitants, something we all repress for the sake of survival? Yes, the key question: Does this place have any f*cking chill?

I have every intention to offer you answers. I have the willpower and the skills to unveil the truth. I will explore conspiracies, conduct experiments of how the incident took place, interview those who remember the incident, and delve into who, or what, did the bats. Join me on a bi monthly journey revisiting one of the most absurd mysteries this college has ever seen.

If you have any information, theories or opinions regarding the incident, please email Occupy the Truth at whodidthebats@gmail.com.