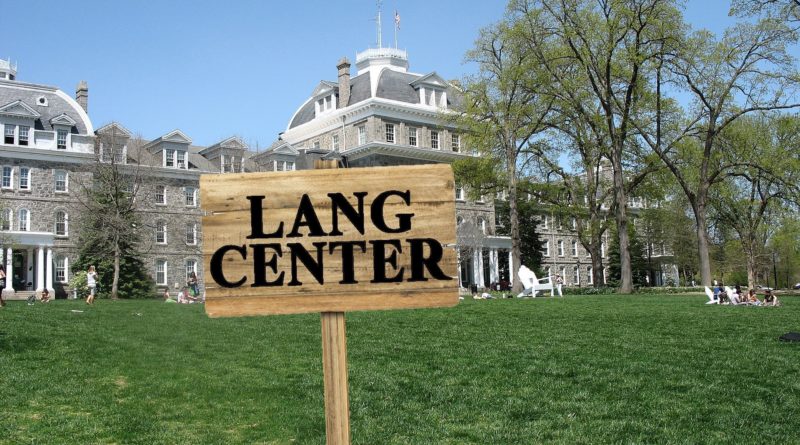 A historic gift to the college of $100 million will commence a massive campus-wide renovation project of almost every single building, from academic to dining to residence halls. The contribution, donated by an anonymous alumni, comes with the caveat that every building involved in the renovation must be renamed “Lang,” or some variation of the name.

“There are no words to describe how grateful we are for this kind and generous gift,” said President Valerie Smith in a public speech thanking the donor. “The renovations that this gift have allowed will benefit students at the college for generations to come.”

Standing on the steps of the building formerly known as Parish Hall, President Smith continued, “I am speaking to you today from the entrance to the Lang Center for College Administration and Mail Delivery, or LCCAMD for short, heralding the arrival of a new era for this community.” Smith mentioned by name a few of the buildings that will undergo extensive renovation, including LBAC, the Lang Biological Arts Center (formerly Martin Hall), LCSL, the Lang Center for Student Life (formerly Sharples) and Lang Science Hall (formerly the Science Center).

Smith concluded her speech by explaining the implications for the construction of the BEP, now renamed LBEP, which has been ongoing for nearly two years. “This donation has opened up many new opportunities for the LBEP, from the possibility of expanding the floor space even more to investing in interior design that looks exactly like the inside of Cornell library.” Smith continued, “We have determined that in order to fully make use of these opportunities, the LBEP site will be completely demolished and construction will be restarted from scratch. The building will be completed in the spring of 2034, right around the time you’ll receive your milkshake from the Crumb Cafe if you order one tonight.”

Students in the audience seemed fairly receptive to the announcement and responded enthusiastically. “I hear the Lang Masochism Hall is getting some new high-tech equipment, which should be pretty cool,” said one student about the building formerly known as Hicks Hall. Another student spoke excitedly about the dorm renovations, saying, “I’m hoping to get a block in the Lang Excessive Drinking Center next year,” referring to the dorm currently known as Worth, “because right now I’ve got a double with a friend in the Lang Center for Curious Odors,”  referring to the dorm currently known as Willets, “but I think we’d have more fun at LEDC.”

“I was on board until they renamed the SEPTA station the Lang Center for Southeastern Pennsylvania Rail Travel (LCSPRT)” chimed in another student. “That was a bit much I think.”

President Smith reassured students that the ambiguity and similarity of the names will ultimately not be a problem in a recent supplementary email.

“The administration is confident that this community will, with time, adapt and grow to meet these new challenges. And we know that we will, because this is not the first time we have had to face these problems.” Smith wrote in a reassuring tone. “As we all know all too well, the similarity between the names of the Crum Woods and the Crumb Cafe, which are pronounced almost identically (excluding the alternate pronunciation of the Crumb Cafe, the Crum-buh Cafe), presented a great challenge to students wishing to hang out in the late hours of the night. We all know a friend who ventured in vain into the Crum woods late at night, seeking to meet up with their friends who were already waiting for their milkshakes at the Crumb Cafe. And vice-versa. That challenge taught us a valuable lesson, and we have all progressed since then in our abilities to understand and infer from context. Now is the perfect opportunity to apply these abilities, for the good of the entire Swarthmore community.”