Few vehicles can claim the versatility of the bicycle. Since their invention in nineteenth-century Europe, they have come to serve as transportation, as a means of fitness, and as recreation, among other uses. I firmly believe that the bicycle is also the most photogenic of all modes of transportation, and whenever I take notice of an unattended bicycle, I stop to take photos. I find that bicycles, due to their nature as such a personal and intimate mode of transportation, tend to evoke my imagination as I envision where they have been and where they will travel in the future. These are the unattended bicycles that I have met, and the stories that they have shared with me as they have waited (oftentimes in vain) for their owners to return. 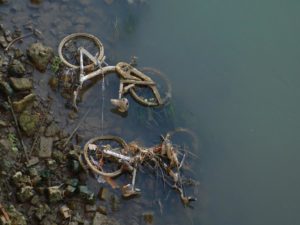 Two abandoned bicycles sit alone in the Tiber River in Rome, Italy. A depressing amount of litter ends up in the river every day, but bicycles aren’t as easy for the currents to carry away as are bottles and cans. They are doomed to spend eternity being reabsorbed into the earth, slowly becoming a part of the river’s ecosystem as grass begins to grow through the spokes and the rubber of the tires begins to disintegrate in the constant ebb and flow of the river. 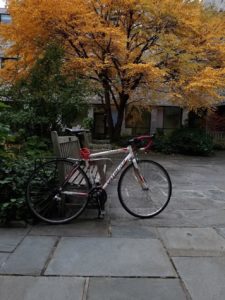 A bicycle sits alone outside of Kohlberg Hall, chained to a wooden bench. It’s peak autumn, and the brilliant jade and gold of the leaves bring out the vermillion of the bicycle and its chain lock. Without any people nearby to disturb it, the bicycle waits patiently for its owner to return in this undisturbed haven of calm. When the owner returns, they will, without a doubt, set off and create new memories together. 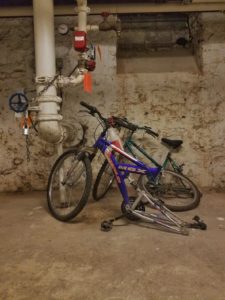 Two broken bicycles exacerbate the already post-apocalyptic nature of the Parrish laundry room. It is indeterminate why they are here and how they came to be in this state, but they emit an aura of desolate loneliness. When I first saw these broken, lonely bicycles, I felt a stab of empathy for them. Their owners had left them behind them, and they had gone from sturdy vehicles to pitiful tangles of metal and rubber. 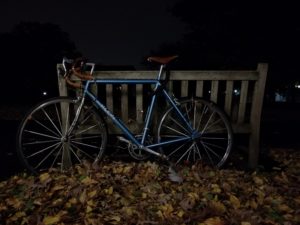 Late at night, a bicycle leans against a bench outside of Pearson Hall. The striking yellowness and softness of the fallen leaves provides a sharp contrast to the electric blue, angular bicycle. At nighttime, gently illuminated by the light filtering through Pearson’s windows, the bicycle became mesmerizing. As I walked past it, I couldn’t help but wonder to whom it belonged and where they were going to ride it.

It’s often said that one never forgets how to ride a bike, but that’s only true to a certain extent; you only never forget how to ride your own bike. When you try to ride a bicycle that conforms to your height and your movements, pedaling comes naturally and without a second thought; however, if the bicycle is too large or too small, or if it has unfamiliar handlebars and gears, then riding will require relearning before it becomes second nature. To me, abandoned bicycles emanate feelings of anxiety and melancholy because they have been left without anyone who knows how to painlessly ride them. Of course, all bicycles will one day become abandoned; however, it remains my wish that all currently-operational bicycles remain well-maintained and with companionship as long as their tires can still spin.

Anatole Shukla '22 is an Editor Emeritus of The Phoenix. He is from Fort Wayne, Indiana, and studied economics, linguistics, and Russian language while at Swarthmore.

Self-Love in an Age of Self-Scrutiny: A Visual Essay

Towards High Fashion in FamilyMart: A Visual Essay﻿

Do Memes Imitate Life, or Vice Versa? Signs of the Climate Strike