Even the cover of “Refuse,” Julian Randall’s debut poetry collection, makes a bold statement: the title is in sharp black letters against a stormy sky, with a winged black boy in the foreground, seemingly struggling to fly.

This stunning image by the artist Jeff Manning leads perfectly into “Refuse’s”’s first poem, listed in the table of contents as “Icarus,” but reading “Icarus Imposter Syndrome”” in the actual poem. Clever stylistic details like this occur throughout the book, and the form of the poetry melds with content. “Icarus,” inspired by the Greek myth of Icarus and Daedalus, is a deeply moving interrogation of race, fatherhood, death, and storytelling; its long lines and lack of punctuation add to its frantic, angry energy. Randall writes:

But if Randall (or, to be more accurate, his persona) “was conceived as a fable,” he refuses to be reduced to one. The persona that populates these poems survives even though “it seemed as if there was nowhere that death was not a question of auto-play.”

“Palinopsia,” the poem in which that line appears, is one of many poems in “Refuse” that grapples with Randall’s experience in wealthy, predominately white institutions of education — in this case, Swarthmore. The haunting poem chronicles a speaker who “didn’t want to leave the room,” whose “ending” — failing out of college — “seems obvious.” Randall continues:

At the time this seemed inconsequential, I was going to die anyway. You have to understand; every day someone was leaving, I blinked and the copper levitated out of the skull, back to the barrel…Next to the stream of people like me dying there were emails that read “Checking in, “Absences,” “Graduation?” But the videos were all connected, an electric rosary, every new saint stained an iris.

Clearly, the speaker is deeply depressed by police brutality against black men: note the despair and fatigue in “you have to understand, every day someone was leaving” and the devastating double meaning of “copper” as a bullet and a cop. In comparison, graduation is inconsequential, particularly given the emptiness of the letter that said told the speaker he wasn’t going to graduate, which “used the word ‘Regrets’ 8 times.” 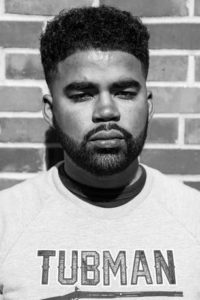 Randall read “Palinopsia” — among other poems from “Refuse” — at the college on October 26. Like all his poems, he read it powerfully and emotionally, captivating the audience. Hearing it as a student here myself, with the obvious association to Swarthmore, I was struck by how the deeply personal voice of the poem contrasted with the callousness of the institution the speaker attends.

But Randall, ever the inventive poet, expertly and bitterly parodies the letter in a poem titled “Regrets,” where he takes the voice of “The Committee on Academic Affairs” writing to a “Senior at __________ College.” Among other hard-hitting lines, the Committee writes that “we are sorry to see this inconvenience of your skin.”

Zooming out, “Palinopsia” exemplifies Randall’s extensive formal innovation. He writes three erasures of “Palinopsia,” putting most of the poem in light gray typeface and letting choice words  and phrases connote their own meaning. He writes a series of poems in the form of academic abstracts related to Black Studies with embedded chilling childhood anecdotes. He writes in the ghazal and the pantoum, forms adapted from Persia and Malaysia, respectively; he takes inspiration from the rapper Nas to write a poem in a form called a Golden Shovel. In that poem, titled “Intimate Soliloquy” and available online in the Michigan Quarterly Review, he uses a line from “New York State of Mind” — “I never sleep because sleep is the cousin of death” — and uses each word as both the words that end each line and, in reverse order, as the words that begin each line.

And I haven’t even discussed the poems that relate to Obama’s presidency, those that investigate bisexual desire, or those that discuss multiracial identity; the scope of “Refuse” is astounding. Randall’s mastery of craft is something all writers can aspire to — I’ve greatly enjoyed writing under the constraints of various forms in Professor Nathalie Anderson’s poetry workshops — but his clarity of voice is rare indeed, and has deeply personal stakes.

Randall declares midway through the book that “there’s blood on the ground, no time remains so I’ll lay it flat: I am Black and Dominican and Bisexual,” but that’s only after writing “my tongue is a refuge for secrets.” And because poems are stories, because they are true in their fiction, we know that Randall has kept secrets from us, but that he has simultaneously revealed the complexities and importance of his identities.

In his bio, he describes himself as a “Living Queer Black Poet from Chicago,” and he writes in the acknowledgements how he owes “an unpayable debt” to Swarthmore’s spoken word collective OASIS, his “first writing community.”

“If I am clear on nothing else,” he continues, “please know that I owe Philly Youth Poetry Movement nothing less than my life.”

That might be as good a purpose of poetry as any other: to support, to hold close, to affirm life. And even as “Refuse” interrogates politics, history, sexuality, biracialism, and racism in America, it might just do that: ending with the brilliant refusal, “until death do I part / from the life I have tarnished with my living.”

In closing, read this book. It’s been deservedly recognized by the poetry community, winning the the 2017 Cave Canem Prize for a first book by a black poet of African descent, but it deserves an audience even from people who “don’t like” poetry. You can order the book online from the University of Pittsburgh Press, and you can also view many of Randall’s poems in online journals, such as in The Adroit Journal, Up the Staircase Quarterly, and Heart Online.

Reuben Gelley Newman '21 is a prospective Honors English major and is also involved in music on campus.