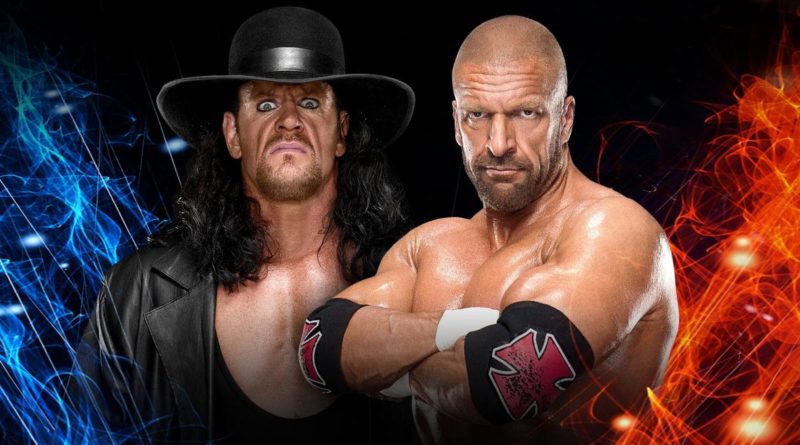 This Saturday, World Wrestling Entertainment will hold its Super Showdown event, its first pay-per-view to be broadcasted live from Australia. While not necessarily in the same vein as other competitive sports in terms of unpredictability — match outcomes are decided in advance — what’s also known as ‘sports entertainment’ provides just as much enjoyment as its major-league counterparts. Rather than focusing on the final score, competitors in professional wrestling focus on telling a story to the audience, getting the fans engaged, while extraordinary athletic maneuvers keep crowds on the edge of their seats. Thus, instead of simply feeling like witnesses to an incredible moment, wrestling fans have the opportunity to be a part of the moment. With that in mind, here are some of the top narratives headed into this Saturday’s event.

First, the main event — a wrestling term describing the headlining match — of the pay-per-view is the culmination of WWE’s  blood feud, centered around perhaps the most well-known wrestler in history, the Undertaker. Regarded by the wrestling community as a living legend, the Undertaker has gained international notoriety for a number of reasons, including The Streak (a 21-0 winning streak at WrestleMania, professional wrestling’s biggest event each year), in-ring accolades (17 championships, and a WWE record 101 pay-per-view victories), and even memes (throwing Mankind off Hell in a Cell in 1998). Even his signature gong is enough to throw fans into a frenzy, as they know when ‘Taker’s music hits, chaos and beatdowns are not far behind. The Deadman, as he’s also known, is essentially WWE’s equivalent of the Grim Reaper — one can never outrun him, they can only face their fate and hope to survive.

On the other side of the ring is another face recognizable to most wrestling fans, even those who only watched in their youth — Triple H. Throughout a career spanning over twenty years, The Game, as he’s nicknamed, has performed a plethora of characters, including his current role as corporate honcho, blending perfectly with his business job as WWE’s Vice President of Talent. Over the course of his career, much like the Deadman, Triple H has dominated the WWE, winning countless titles and defeating a slew of challengers, sometimes to the point of redundancy.

However, the rivalry between the two men didn’t truly kick up until 2011, around WrestleMania 27. Trying to avenge his best friend, Shawn Michaels, who had been forced to retire after losing to the Undertaker at WrestleMania 26, Triple H had challenged the Deadman to a match at the following Showcase of Immortals. The  Undertaker accepted, and at Wrestlemania 27, the two fought in a no-disqualification match, where the Deadman escaped with a close win after forcing Triple H to submit. Refusing to admit defeat, the Game demanded a rematch, and at the subsequent Wrestlemania, the two squared up again. With some interference from Shawn Michaels, who had been named special guest referee, Triple H almost pulled out a win, before the Undertaker managed to overcome the odds and emerge victorious.

Even standing at 0-2, though, Triple H believes he still has unfinished business with the Undertaker, wanting to settle the score once and for all at Super Showdown. In what’s being billed as their final confrontation, however, the Game isn’t coming empty-handed, as Shawn Michaels will be in his corner for support. the Undertaker isn’t coming unprepared either, bringing his storyline brother Kane in his corner to reunite another one of wrestling’s most powerful teams — the Brothers of Destruction. The potential comparisons and narratives are endless — the Boss versus the Reaper, D-Generation X versus The Brothers of Destruction, two legends vying to be the face of a bygone era — but it all boils down to one thing: two grizzled veterans duking it out one last time.

From two former stars to the current leaders of the business, we move on to the next major match on the card — The Shield against the trio of Dolph Ziggler, Braun Strowman and Drew McIntyre. On paper, The Shield, composed of Roman Reigns, Seth Rollins and Dean Ambrose, seem to have a surefire win. Formed as a trio years ago, and currently featuring both a world champion (Reigns with the Universal title) and a singles champion (Rollins with the Intercontinental title), the group seems to have the edge both in terms of talent and chemistry. But digging a little deeper makes the outcome seem like far less of a forgone conclusion.

First, their opponents are far more dangerous than the statistics might indicate. Dolph Ziggler was the Intercontinental Champion before Rollins, actually beating him for the title this past June before losing it back to Rollins at SummerSlam in August. Ziggler is also a two-time world champion and eight-time singles champion, making him every bit as accomplished, if not more so, than any member of the Shield.

For Drew McIntyre, by contrast, his strength is the progress and growth he’s shown since his return. When he first left WWE in 2014 to wrestle on the indie circuit, he was essentially a comedy act, used as little more than a jobber — a term used to describe a wrestler who consistently loses. Since his return though, McIntyre has gone a complete change in personality, destroying almost every opponent in his path with ruthless aggression, including both Rollins and Ambrose. In addition, the chemistry between Ziggler and McIntyre has been phenomenal, as the two not only captured the Raw Tag Team Championships, but defeated Rollins and Ambrose in a tag title match as well. If anything, their bond might be even stronger than the Shield’s.

Finally, and perhaps the most glaring threat to the Shield’s success, is Braun Strowman. If the Undertaker was WWE’s equivalent of the Reaper, Strowman is their version of Thanos — nothing, and no one, could prevent the aptly-named Monster Among Men from laying waste to everything in his path. From an ambulance crash to being thrown off the stage to getting crushed in a trash compactor, Strowman has survived it all, shrugging off any attack as a mere annoyance en route turning his opponents into human ragdolls. With the perfect combination of speed and brute strength, Strowman is almost like a human cheat code — able to withstand almost anything, and able to destroy almost everything. In his most recent match against Roman Reigns for the world title, it took former UFC fighter Brock Lesnar interfering to even force a no-contest. Now with even more incentive to destroy Reigns, as well as the other members of the Shield, Strowman might be unstoppable.

Meanwhile, for the Shield, the cracks are beginning to show in a once impenetrable surface. Though the three men have repeated time and time again that they have been brothers since day one, the deep tensions between Rollins, Reigns and Ambrose can be traced back to Monday Night RAW on June 2nd, 2014.

It was that night that the Shield, fresh off destroying rival faction Evolution — comprised of Triple H, Randy Orton and Dave Batista — shattered for the first time. As Orton and Triple H, the remnants of Evolution, confronted the Shield, Rollins betrayed his brethren, attacking Reigns and Ambrose and joining Evolution to lead a new corporate faction known as the Authority.

After long feuds between all three men, fueled by their desires for the world championship, Ambrose and Rollins re-formed the Shield in August 2017. It wasn’t easy — even after three years, and with a common enemy in mind, neither man trusted the other, and it took multiple beatdowns for the two to finally join forces. Reigns would join the two in October, creating what would be the first of two Shield reunions. Unfortunately, this reunion would be brief — Reigns would miss a month of action with an illness, while Ambrose would suffer a triceps injury in December, dooming the faction to be quietly written off by the end of the year.

The second, and current, incarnation of the Shield arose this past August, when Ambrose, returning from his injury, joined Rollins in ambushing Braun Strowman. The Monster Among Men had been attempting to defeat Reigns for his world title, but the Shield intervened, powerbombing Strowman through a table. Since then, the trio have ruled the roost — at least, until Strowman, Ziggler and McIntyre stepped up to challenge them.

But even four years after Rollins’ initial betrayal, the tensions between the three men are still palpable. Right now, the pressure and questions seem to all be mounting on one member in particular — Dean Ambrose. Out of all three, he’s passed up the most for the group — giving up months of his career, and even championship opportunities. After being the first in the faction to hold a singles championship, Ambrose has been forced to look on as his brethren flaunt their titles in front of him. The Lunatic Fringe, as Ambrose is also named, has proven himself to be just as good, if not better, than his counterparts, as he defeated both Rollins and Reigns for the WWE Championship in 2016. Nevertheless, he has thus far remained humble, giving up personal gain for the unity of the Shield.

But for all his sacrifices, at least within the recent incarnations of the group, Ambrose has gotten almost no gratitude. When he was sidelined with his tricep injury, Reigns simply went right back to vying for personal glory, challenging for the Intercontinental and Universal Championships. Rollins, Ambrose’s tag team partner when the injury occured, straight-up replaced Ambrose, first with Jason Jordan, then with Finn Balor, making it seem like Ambrose was little more than an interchangeable piece. For all the sacrifices he’s made, and the absolute lack of recognition from his supposed “brothers,” The Lunatic Fringe might just be through with ‘seeing the greater good.’

These stories, amongst countless others, will reach their climax at this Saturday’s event, when the competitors step into the ring to lay it all on the line. If you want to see how everything goes down (or if you just want to procrastinate on your assignments), just turn on the WWE Network this Saturday, kick back, and enjoy!