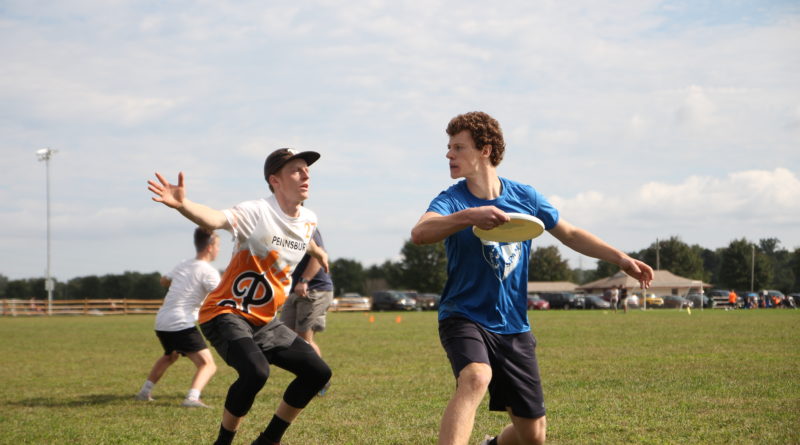 Note: This author is a member of the men’s ultimate frisbee team

In recent years, Swarthmore varsity athletics teams have begun to attract attention on the national stage. But one aspect of the Swarthmore athletics department that often gets overlooked is the important role that club sports play in the lives of hundreds of Swarthmore students. The club sports program at Swarthmore has grown in both size and prominence over the past few years under the supervision of Max Miller, the Assistant Director of Athletics for Recreation and Wellness. It now includes six teams: men’s ultimate frisbee, women’s ultimate frisbee, men’s rugby, women’s rugby, men’s badminton, and co-ed fencing. Soccer also operates as a de facto club sport, although it is officially a student activity group.

Many club sports athletes are former high school athletes who perhaps were not able to, or didn’t want to, compete at the varsity level at Swarthmore. Many are former varsity athletes who simply weren’t able to maintain both their varsity athletics and academic commitments. Many love being able to represent their school and love to be able to compete. And in many cases, such as fencing, people’s desired sport simply doesn’t exist at the varsity level.

“Being a club sports athlete at Swarthmore is really great because the experience is what you make of it. Because [fencing] is a competitive team, we have the benefit of getting to face other schools, but at the same time get to still have flexibility in both attending and organizing practices,” said Sajal Akkipeddi ՚20, one of the captains of the fencing team.

Fencing has had a good year recruiting new talent so far this year.

“We have a crop of about 15 freshmen, and are in the middle of getting them up to speed with basics to get them ready for the first tournament at the end of October. We have grown from a club  with barely half-full squads to full squads and change this year, which is pretty awesome,” said Akkipeddi.

Many club sport athletes do choose to dedicate a significant portion of their time to their sport. On most days of the week, you can expect to see disks flying over either Cunningham or Mertz Field. These are the telltale signs of ultimate frisbee practice, that of either the “Earthworms” men’s team or the “Warmothers” women’s team. Both names are anagrams of Swarthmore and perhaps speak to the slightly quirky nature of both teams. And if you happen to be walking around campus after midnight on a Thursday, you might want to keep your eyes peeled. Both teams play a variant of golf known as “frolf” (frisbee-golf) in the early Friday hours with “holes” located at various points around campus. But at its core, frisbee is filled with dozens of dedicated athletes who commit up to five days a week to practice, and often more to voluntary lifting. Unlike in varsity sports, there aren’t punishments for being late or missing practices (except for running sprints). Participation in all activities is completely voluntary. But people show up everyday because they are committed both to their teammates and to the sport they love.

Chief amongst them are captains Max Franklin, Sam Gardner, and Rye Buckley. On any given day, one can expect to see the captains in the gym for a morning lift, before heading out into the fields for afternoon practice. They combined to help lead the Garnet to a 3-3 finish at their first tournament of the year two weekends ago.

“[This] is the best we’ve done at that tournament in my time here, with wins over Rowan, Stevens Tech, and Shippensburg,” said Franklin.

The fall season for ultimate is generally a tune-up of sorts with the primary focus being that all players get touches and are able to play at a high level come the competitive spring season. As with any college athletics program, roster turnover and loss of seniors can present a major issue, but Franklin doesn’t foresee that being a huge factor this year.

“It’s always hard to lose seniors, but with all our new players, it definitely hasn’t been crushing to the team. By and large, our freshmen are coming in with at least some previous experience, so they’ve been learning very quickly,” said Franklin.

The women’s ultimate frisbee team had an even more impressive result as their first tournament of the year, as the Warmothers were crowned champions at the “Jersey Devil” tournament. They also competed this past weekend in Virginia.

“It was a real confidence boost when we actually won the [Jersey Devil] tournament, which I think fed into the team spirit this past weekend, when we went to a tournament eight hours away in southern Virginia. It was a great opportunity to see how much our new players are already improving, which is really exciting,” said Gillie Tillson, one of the Warmothers’ captains.

With regards to other teams that have gotten off to fast starts to their seasons, women’s rugby played against Neumann this past Saturday and won all three of their matches. An article highlighting rugby’s endeavors this fall will be forthcoming.

While Swarthmore club sports don’t always receive the same attention and glory that other teams do, they are filled with athletes who love to compete, love to work hard, and love to represent their school out on the field. For all, club sports represent an opportunity to enrich their time here at Swarthmore and to find a team and a community.