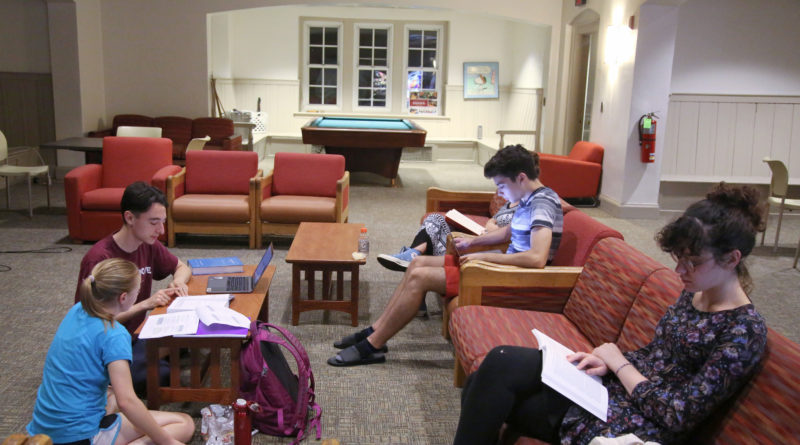 Being back on campus is super duper extremely weird. A good weird mostly, after a summer at home that I most definitely plan on never doing again (sorry mom), but more than a good or bad weird it’s mostly just a weird weird.

It has of course been nice to see the familiar faces, to get the wonton egg drop soup from Sci Bar, to run into professors (hi Atshan!), to order a spicy chicken and egg sandwich from the bar at Sharples, to get the gummy frogs from Essie’s, et cetera, but with that comes the awkward Sharples encounters in The Big Room, the tripping on nothing on McGill Walk, the hysteria of Essie’s and Paces and oh wait I mean Crumb Café, the half-smile I feel like I need to give to half the campus who I’ve had a single encounter with.

Ultimately, despite all the changes and the things that haven’t changed that I wish had, I think I’m excited for this year. I think I kinda have to be. Being pessimistic equates to drowning here, and I can’t swim. (Hence the swim class that I have to take this semester since I failed the swim test last year.) Because of my newly adopted optimistic attitude, I have decided to dub sophomore year the Sophomore Soar. Gone are the days of misery poker, misery Pokemon, misery Bakugan, misery Neopets, misery Club Penguin (unfortunately, R.I.P.).

That doesn’t mean that I’m not expecting roadblocks. It’s Swarthmore for God’s sake! I know that it would be foolish of me to not expect the usual awkwardness from Swatties who don’t know how to act in social situations, the difficulty from being booked from 9 a.m. to 9 p.m. with no breaks and then needing to lug yourself over to McCabe and get started on work for the next 9 a.m. to 9 p.m. shift, the anxiety of needing to get lunch from 12:35 to 1:15 when all of Swarthmore is suddenly in Sharples. That being said, I think the very fact that I am aware of these roadblocks and know how to cope with them (somewhat) will make all the difference.

Last year was in many ways a shit show. It had high highs undoubtedly, but low lows as well. I’ve told a lot of first-years this time around that while I’ve always loved Swarthmore, I haven’t always loved my individual experience with Swarthmore. I think so long as I’m able to hold onto my love and appreciation for Swarthmore—the brilliant professors, the beautiful scenery, the thoughtful friends—I’ll end up okay.

That isn’t to say that it can’t be hard to sometimes though. Even though I’ve only been through not even a full week of classes as I write this, I’m already starting to look around at the beautiful space we inhabit a little less, staring at the nothingness on my phone to avoid making awkward eye contact with that guy who lived on my hall for half of first semester and who I spoke to twice at a hall meeting.

Seeing the signs of a slump already start to form is slightly disheartening, but I’ve spoken about this whole Sophomore Soar idea to just about everyone I know by now, so it’s more of a pride thing to see it come to fruition than anything at this point. Because I’m gung-ho about making sure that this whole Sophomore Soar thing pans out, I’ve made a small list of reminders to keep myself in the right headspace.

First and foremost for sophomore year, I’m really trying to be cognizant of where my energy is going and redirecting it if necessary. I think it’s very easy to get caught up in the minutia here, but there simply isn’t enough time in the day to give energy to everything and everyone. Already this year I have caught myself signing up for this thing that I just got e-mailed or that thing that was posted on JobX, but I’ve been stopping myself midway through and reminding myself that I’m already doing a lot and maybe that Sunday yoga class, while nice, isn’t exactly what I need.

Allowing yourself nothingness is one of the best things you can do for yourself. With that comes knowing when to stop. There’s always more work to do, that’s definitely something I’ve learned. Because of that, you can go crazy if you just keep working until you’re “done” because you’ll never reach this elusive “done.” Trust me, I’ve tried. And failed. Every time. Giving yourself a manageable amount of work to do each day and staying on top of that is probably the best way to stay sane here.

I think one of the ways that I’m really making an effort to stay sane is by genuinely trying to live a healthier life here at Swat. It’s hard. Without my mom here to tell me to remember to eat my broccoli (and not just the heads), it can be really hard to not just eat hotdogs and french fries every meal. I’ve really been making an effort to reduce my hotdog intake though, and I’ve already been successful!

I recently had a wise friend tell me something that has made me come to appreciate vegetables more. As someone who if asked last year when I ate my last vegetable, I would give a confused look and say something along the lines of, “Maybe last…y-mo-wee-yesterda-right now!” I was talking to my friend about how I just can’t eat salad because lettuce and spinach leaves don’t taste like anything, and my friend told me that that’s kinda amazing because they’re super good for you and they don’t even taste bad! Ever since I’ve had one (1) salad. Expecting more in the future!

Not sure if the vegetable anecdote relates to the article, but I don’t think that I could’ve written an article on the Sophomore Soar and not included it. I’m sure I’m forgetting other helpful tips and tricks to help get through the year, but part of the Sophomore Soar is knowing when to stop like I said, so I think I’ll cut it short before it gets uncomfortably lon