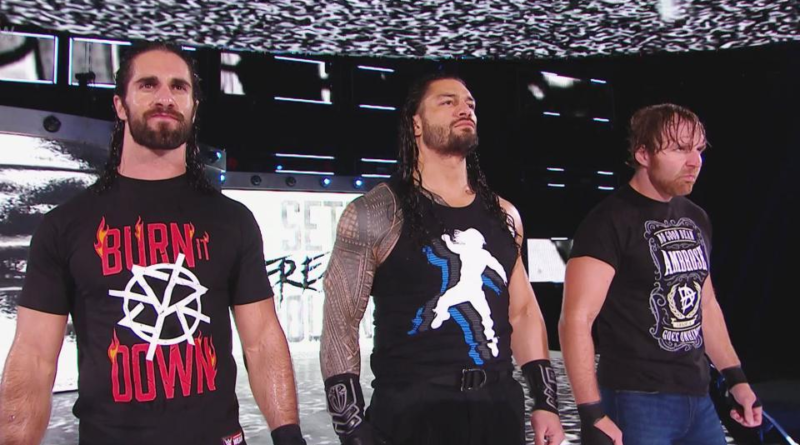 Professional wrestling. When most people hear the term, they don’t normally associate it with sports– after all, the outcomes are predetermined, and the performers’ end goal isn’t just to win a championship, but to entertain an audience and send them home happy. However, that doesn’t mean it’s not worth watching– constantly-evolving storylines captivate viewers’ attention, and the athletic feats the wrestlers pull off on a daily basis are jaw-dropping. After all, you can script winning a match, but you can’t fake falling off a twenty-foot tall steel cage, or hitting a cross-body from the top of a ringpost. Even the stories have evolved. While the wrestling many people visual is likely that of the 1980s – when people like Hulk Hogan and Randy Savage ripped their shirts off, exposing muscles in places most people don’t realize exist – current storylines mix reality and competition, “works” (predetermined actions) and “shoots” (unscripted acts), to create a compelling narrative fans can’t get enough of. With World Wrestling Entertainment’s (WWE) Survivor Series pay-per-view coming up this Sunday, November 19th, here are some of the top storylines around the company heading into the event.

A Clash of Champions

With Father Time working against him, longtime WWE CEO and Chairman of the Board Vince McMahon started looking to the future in 2016, handing over day-to-day operations of the company to his children, Stephanie and Shane McMahon. However, in classic Vince McMahon fashion, hoping for competition, he split the company in two, giving each child reign over one of his flagship shows– Stephanie over the iconic Monday Night RAW (aka the Red Brand), and Shane over the redesigned SmackDown Live (the Blue Brand). After splitting the main roster in two in the WWE Draft that summer, every Survivor Series since has been centered around sibling rivalry, with both Stephanie and Shane looking to outshine the other by pitting the best of their talent against each other.

In that regard, this year will be no different – SmackDown’s United States Champion Baron Corbin will face RAW’s Intercontinental Champion, self-deluded actor The Miz, while RAW Women’s Champion Alexa Bliss will fight SmackDown Women’s Champion Charlotte Flair. RAW Tag Team Champions Sheamus and Cesaro (read: mohawked Irishman and bald Swiss super athlete with a penchant for turning every match into a brawl) will face SmackDown’s Champions The Usos (Samoan high-flying fan favorites recently-turned rap aficionados). Capping off the title-holding matchups, though, is the one between each brand’s designated world champion. For SmackDown, the WWE Champion, self-proclaimed “Phenomenal One” A.J. Styles is one of the greatest all-around wrestlers of all time. For RAW, Universal Champion and former UFC Champion Brock Lesnar has the both the build and aggression of The Hulk. No brand wants to be known as “the one with the lesser champions”, so the fights are bound to be spectacular as RAW and SmackDown seek to prove that their title-holders aren’t just the best in their show, but the entire company.

Beyond the champions, though, Survivor Series is built around one event: an elimination match, where two teams of five wrestlers go at it until all members of one team are eliminated. For the second year in a row, RAW and SmackDown have fielded rosters to face off, though the process hasn’t been smooth for either one. In particular, the building of the men’s teams have been noteworthy for their controversy and headlines. Human wrecking ball Braun Strowman was an obvious pick for RAW General Manager Kurt Angle, given the former’s incredible mix of power and speed. But Angle then made the questionable decision of putting combustible elements Finn Balor and Samoa Joe on the team right after both had attacked each other around the ring. Stephanie McMahon then added to the tension for Team Red, as she forced Angle himself to join the team. When Angle tried to name his (storyline) son Jason Jordan as the 5th member, she cut him off. In a shocker, Stephanie’s husband, 14-time world champion and WWE Chief Operating Officer Triple H returned, announced he was the fifth member of Team RAW before hitting a Pedigree (his finishing move) on Jason Jordan and staring Angle down. On the blue side, best friends-turned-archenemies-turned-best friends Kevin Owens and Sami Zayn played an enormous part in creating their brand’s roster. After Zayn turned heel and became a villain by costing Shane his match against Owens, both men gloated to Shane, claiming he needed them in order to win for SmackDown. Shane, though, turned the tables, pitting both in matches for team spots against two stars Zayn and Owens had managed to anger: Japanese sensation Shinsuke Nakamura and RKO incarnate Randy Orton. After constantly cheating and taunting both Shane and SmackDown GM Daniel Bryan, both suffered cruel twists of fate, as Orton defeated Zayn after Owens tried to distract the referee, inadvertently allowing Orton to hit Zayn with a low blow and RKO. In Owens’ match, Orton laid out Sami Zayn at ringside, distracting Owens long enough to walk right into Nakamura’s Kinshasa finisher. After developmental call up Bobby Roode defeated Dolph Ziggler, though, Shane took what appeared to be a power grab, declaring himself a member of team SmackDown without competing in a match himself. Finally, SmackDown sent ripples around the world when instead of selecting an incumbent roster member, they selected free agent, sixteen-time world champion and meme incarnate JOHN CENA for their fifth member spot. Both sides are stacked with endless talent, but with the controversy and threats of external interference (Owens and Zayn against SmackDown, and returning superstar Kane feuding with Strowman) can either side hold it together long enough to pick up a win?

The Shield is back.

In 2012, the arguably strongest wrestling faction of all-time emerged when Seth Rollins, Dean Ambrose, and Roman Reigns debuted at that year’s Survivor Series, the precursor to a two-year program where the trio would run through everyone on the roster. Winning championships, opposing authority, and even crushing Evolution – the faction headed by Triple H, Randy Orton, and powerhouse Batista – The Shield seemed poised to take control of the company as a unit. It would never happen, though, as Triple H’s “Plan B” to destroy The Shield was Rollins betraying his brothers, beating them down, and joining Orton and Triple H in a new faction known as The Authority. In the following two years, the three men dominated WWE, always in the title scene feuding with one another, sometimes even having two of them work together, but never a full reunion. That changed this fall, though, as Rollins and Ambrose, uniting and becoming tag team champions in the summer, began feuding with Sheamus, Cesaro, and The Miz. After the Miz and his henchmen Sheamus and Cesaro laid out Roman Reigns, the three former Shield members met up in the locker room and gave a cryptic nod to each other before leaving. The following week, all three came out together, laying waste to superstars throughout the show, and proclaiming the reunion of The Shield. Unfortunately, due to medical conditions, Reigns couldn’t make it to the first pay-per-view with The Shield, with Kurt Angle joining Rollins and Ambrose instead in a winning effort against The Miz, Sheamus, Cesaro, Kane, and Strowman. After a short absence, though, Reigns is back, just in time for The Shield to face Smackdown’s resident trio, The New Day, at Survivor Series. With much more experience and drive under each member’s belt, a good question to ask might be: sure, The Shield is back, but for how long?

Describing every storyline heading into Survivor Series would probably take longer than Thanksgiving break, but luckily for you, finding out how they resolve isn’t nearly as difficult. The pay-per-view will stream free on the WWE Network (first month of Network subscription free, subsequent months $9.99), and its placement on Sunday night means you’ll have yet another way to procrastinate on your papers. If you’re still off-put by the idea that the results are predetermined, that’s all right – professional wrestling, just like anything else, isn’t meant for everyone. But for those who do plan on watching, prepare to be entertained.