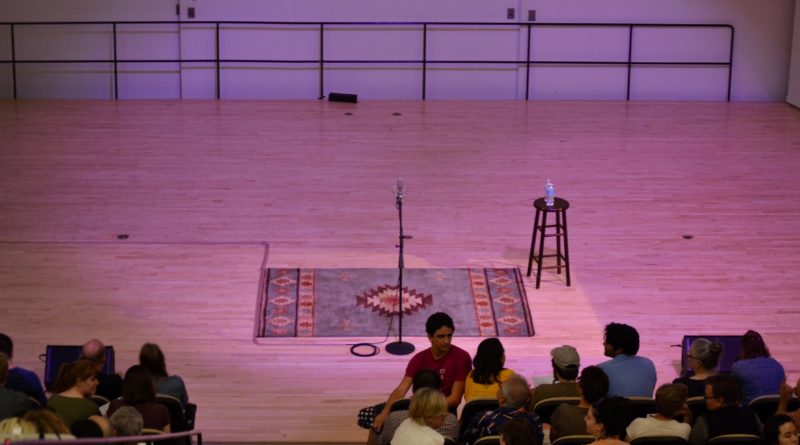 A couple weekends ago, I saw Chris Thile, a mandolin-playing musician with three Grammys and the MacArthur Genius Award. During a pre-show demonstration for Swat students and staff, Thile spoke about a delicate part of being human.

He presented us with a paradigm of creativity: the frustrations of attempting to think individually. To do so means to be creative, but also independent, in your work and life. If you were not a child prodigy like Thile was, getting to a level of mastery that is conducive to exploring the borders of music, literature, science, and math might seem a little farfetched. For many of us, the daily chores of life can be challenging enough. And let’s not even talk about dating.

In a 2015 interview for Rolling Stone, Thile said, “We travel all over the place and we interact with people, and [we see] person after person experiencing life through phones … The basic human desire to connect with other human beings is alive and well, but the quality of the connection we are settling for is lower.”

Conversing, as a basic human function, has its roses and its weights. When we talk to one another, we respond almost instantaneously with our own, unadulterated selves. It’s a gift and a burden, wrapped up in a word, a smile, a simple one-line response. We cannot edit what we don’t like about ourselves. But the hope is that we come to tolerate, if not love, the parts that make us the most us and, in the process, find a sense of self-efficacy. Albert Bandura, a leader in positive psychology, defines the term as a person’s belief in performing at a level that allows them to exercise influence over the events that affect their lives. Through conversations, although there are risks, we often find ourselves projecting the most individual sides of ourselves.

One might think that social media would bolster users’ self-efficacy. Platforms give people the skills of communication, without the baggage of body language, class, ethnicity, and gender. In theory, this sounds like a utopia for garnering individual thought and self-efficacy through dialogue.

The shadow cast on your screen, however, comes from the inadequacy of these platforms to create the equivalent social gravity of engaging in a conversation face to face. This is part of why they are so appealing. It is also why striking up a conversation when your phone is in your pocket can be especially hard. Little by little, our capacity to present ourselves, without caricature, to people we have not met before could be dwindling to the lullaby of social media.

Social media is not some neoliberal comfort pill, but rather a tragic reality. Relying on social media for instant gratification, for relief from loneliness, depletes one’s social capital of real world friends, lovers, and family. It conflates our hurtles and achievements into the humdrum of feeds and icons and a flat grey malaise. This kind of communication is such an oversimplification of human interaction that I fear we become simpler ourselves. Vaclav Havel, the Czech president and playwright who saw the fall of the USSR and the splitting of Czechoslovakia, predicated of our generation, “The tragedy of modern man is not that he knows less and less about the meaning of his own life, but that it bothers him less and less.”

I acknowledge that in places like Venezuela, where people are desperate for true, non-governmental information, social media has been crucial for organizing activists and for supporting freedom of speech in otherwise dim times of oppression. With that said, many of us in the U.S. are abusing social media to our own detriment.

Later on in the Rolling Stone interview, Thile says of technology and his Grammy winning record The Phosphorescent Blues, “I think we can start making these things work for us and not the other way around. The record, lyrically, is something of an exploration of those kinds of thoughts. What does connection mean to various kinds of people and how do we best pursue that at a time when it’s very easy to take things connected for granted?” You might be thinking, this is all well and good in grand philosophical terms, but in practice, what can I do? Chris Thile’s show reminded me of how we often fail to compliment self-efficacy in others, much less in ourselves. It is one of the tragedies of our generation that we spend so much time absorbing what others do instead of creating, inquiring, and reflecting. This essay is not some esoteric call to action, but rather about putting down your phone and thinking about what you have to say — that’s it.

At the Thile concert, I saw a person thinking for himself, improvising, and having a damn good time. It is too late to be a child prodigy, sorry reader, but who wants to win a Grammy at sixteen anyways? Nevertheless, it is the perfect time to realize that you are and will ever be more than what a social media platform has to say about you, and to make a little music of your own.