Opinion » Read: Letters Between Alum and Board on Divestment 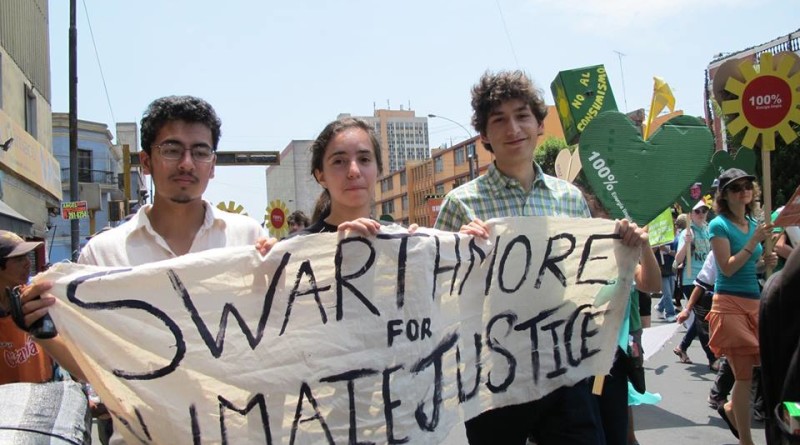 In January, I and other alumni sent letters to the Board asking them to engage in dialogue with students, alumni, and faculty on divestment. Below, I share my letter to voice my support for the student referendum today and tomorrow. The Board responded with a letter which I am also sharing. This response focuses on excellent actions that the College is taking at the campus scale but deflects the urgent need to also pursue society-wide leverage points for change – which divestment provides. Large transformations for the public good in the USA have always resulted from coalescing actions across individual, community, and national and economy-wide scales. Thus, I again ask the leaders of Swarthmore College, my beloved alma mater, to do the right thing: Use these wonderful campus-scale commitments as an ethical base from which to influence society-wide transformation by planning a pathway to fossil fuel divestment.

Dear President Smith, the Board of Managers, and other Swarthmore College Leadership:

I am a member of the Class of 1976 who simply loves Swarthmore. I have contributed loyally many years in a row to the annual fund. In December, 2015, I sent a personal note with my annual contribution expressing my deep dismay that the Board of Managers had declined to divest from fossil fuels and urging you to reconsider this decision. In June, 2016, I attended my 40th class reunion and was honored to be interviewed for the “Because of Swarthmore” video. During the reunion, I spoke in person with President Smith and with the Chair and Vice Chair of the Board of Managers about divestment and again urged you to reconsider divestment. With tears welling, I said that I would feel morally obligated to stop my annual contributions if Swarthmore continued to avoid divestment. In December 2016, with a truly heavy heart, I did not send an annual contribution to Swarthmore because the leadership had still not committed to a plan to divest. This week, I have to decide whether or not to include my beloved Swarthmore as a beneficiary in my estate. This is on my mind because my spouse, Wayne Barstad, and I are meeting with our estate lawyer this week.

Climate change is a profoundly existential threat to human civilization. Left unchecked, it will cause unfathomable suffering worldwide. We know how to reduce the chances of truly catastrophic climate change but time is running out. The Paris Climate Treaty talks, which I attended, clearly signaled that time is running out. Scientific studies since Paris suggest the window of opportunity is closing faster than first projected. I live and breathe this urgency daily in my work as Professor of Sustainability Science at Dartmouth and in my service as the first woman Chair of the Board of Directors of the Union of Concerned Scientists (UCS).

The fossil fuel industry has purposefully deceived the public and elected leaders about climate science. The fossil fuel industry has refused to make the major changes that it must make to avert dangerous climate change. This is laid out in the UCS Climate Accountability Scorecard released this past fall. And now the Trump administration is moving quickly to undo federal action to mitigate climate change and aggrandize the fossil fuel industry’s plutocratic power. We need to stop these plutocrats from wreaking irreversible climate damage. Divestment is a key part of stopping them. The abolition movement and the anti-apartheid movement, among others, showed the power of divestment to remove the social license of bad actors.

Swarthmore taught me to exercise critical thinking and moral courage. It taught me to stand up to injustices and chart an ethical course forward, no matter how arduous. Swarthmore needs to act as it teaches to respond to the climate crisis. Swarthmore needs to act as a leader in helping to avert catastrophic climate change, for the sake of present and future generations worldwide. I implore you to commit in the next 100 days to a plan to divest Swarthmore’s endowment from the “carbon majors” in the fossil fuel industry.

I would be happy to engage further on this issue.

Thank you for your recent communication urging the Board and administration to reconsider its position on divestment. As we’re sure you know, the Board made its decision not to divest after a long and carefully considered deliberation, first in 2013, and then again in 2015 (http://www.swarthmore.edu/board-managers/sustainability-and-investment-policy.) Although that decision stands, we continue to take this subject very seriously and are thus providing you with a detailed reply.

We agree that climate change is a defining challenge of paramount importance for current and future generations.  The magnitude of this issue underscores the need for Swarthmore to champion meaningful and sustained efforts that will model best practices to reduce carbon consumption, educate our students on the causes and consequences of climate change, and demonstrate national and global leadership in sustainability initiatives. Here are some of our new and ongoing efforts that demonstrate our substantive commitment to sustainability.

First, in 2015 the College hired a new Sustainability Director, Aurora Winslade, who brings deep experience implementing transformative change in higher education. Her vision and pragmatic leadership will guide us to build upon existing efforts.

This ongoing work includes strategies not only to meet but also to exceed industry standards and best practices for our facilities and operations. We intend to lead by example in reducing our carbon footprint, with the goal of carbon neutrality by 2035, if not sooner. To meet this goal, the Board of Managers adopted a Sustainability Framework, which outlines rigorous standards for building and renovation in the most energy efficient ways possible, and authorized expenditures of an incremental $12 million to bring the new Biology, Engineering, and Psychology building to the highest environmental standards ever set on our campus. In addition, scores of students, faculty and staff are engaged in a college-wide effort to imagine new and innovative ideas to meet this challenge. For example, the Sustainability Committee created a Green Initiatives Fund to encourage and sponsor projects that contribute to the College’s environmental sustainability.  To showcase and reinforce the value of this work, the Office of Sustainability last year organized the 1st Annual Sustainability Summit, and we will host another summit later this spring.

Beyond these institutional best practices, we believe that we must also instill in our students an enduring commitment to the natural environment throughout their education. This commitment is reflected in the delegation of five students and two faculty members that attended the 21st United Nations Framework Convention on Climate Change Conference in Paris, marking the third year a Swarthmore delegation attended UN sponsored climate talks. Last year we also announced the new President’s Sustainability Fellowship Program. This collaboration between the President’s Office, the Lang Center for Civic and Social Responsibility, Environmental Studies, and the Office of Sustainability launched in the fall. It provides students with an opportunity to engage in a year-long course and internship to research and develop solutions for campus sustainability challenges in collaboration with faculty and staff mentors. By forging interdisciplinary collaborations, conducting independent research, and developing project management skills, these students are applying classroom leaning to make immediate positive and concrete differences on campus. In the years ahead we will continue our efforts to embed the principles of sustainability more deeply into our curricular and co-curricular programs.

Finally, we would like to share an example of our demonstrated leadership on issues of sustainability. We believe that an accelerated transition from fossil fuels to clean energy technology is of paramount importance, and that a critical means of accomplishing this transition is the institution of an economy-wide increase in the cost of carbon. Last spring the Board of Managers approved a $300,000 carbon charge to be added to the College’s operating budget with the requirement that the cost be derived from existing operations. The fees from that charge will provide funding for campus initiatives and projects that increase energy conservation and efficiency and promote renewable energy. A faculty-led working group developed and proposed this idea, which is continually being refined, demonstrating the engagement of our entire campus community in these sustainability initiatives. We are one of only a handful of higher education institutions that have taken this pioneering step.

We agree that our work is not nearly done. Now more than ever, here on campus and across the globe, Swarthmore must continue to make an impact through smart and proactive efforts that are tailored to the unique strengths and capacities of the Swarthmore community. To join us in supporting an ambitious vision for campus carbon neutrality by 2035 and further leadership in the field of sustainability and climate change, we hope you will consider directing future contributions to the Fossil Fuel Free Fund or the President’s Climate Commitment Fund in order to support tangible progress in these vital areas.

Thank you again for taking the time to write. We hope that our campus and alumni communities can work together to carry on our Quaker legacy of social responsibility, simple living, and the conservation of resources.

2 thoughts on “Read: Letters Between Alum and Board on Divestment”