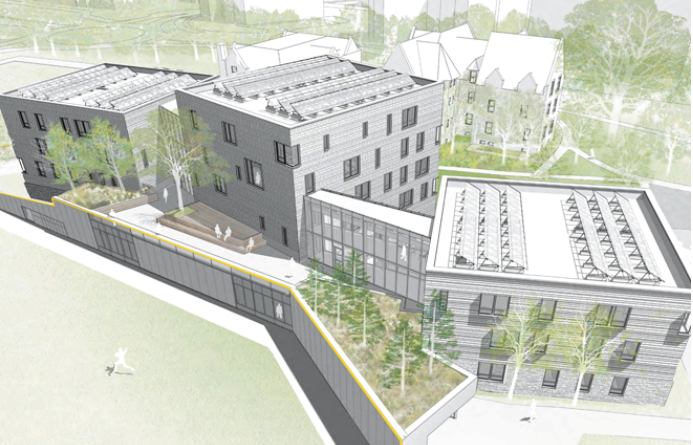 Following a 22-17-1 run last year, the Swarthmore Baseball Team sought to bolster certain aspects of the program for the bright future ahead. While bringing in a strong freshmen class still proved a priority for the program, it became clear that the outdated facilities would need work to keep up with the rapidly improving gameplay and influx of future recruits. This fall, the administration rewarded the team’s success and efforts, securing funding and beginning construction on key improvements to Clothier Field.
With the first home game currently scheduled for Mar. 18 versus powerhouse Penn St. Berks, construction has ramped up in hopes of finishing before the homestand. This first phase consists of upgrading a significant portion of the seating and technology around the ballpark, including a press box complete with improved broadcasting functionality. The second phase will continue throughout the season, as the Palmer, Pittinger, and Roberts (PPR) Halls undergo simultaneous construction, integrating the dormitory into the landscape of the outfield fence. The athletics department compared this state-of-the-art fence integration improvement as mimicking the likes of the right field fence at the San Francisco Giants’ AT&T Park, where fans have a close and intimate experience with the game before them.
Another important addition to the Swarthmore baseball program was assistant coach Dan Gusovsky, who came from William & Mary to lead the pitching staff and conduct recruiting process.
In an interview, he said “The renovations will enhance Clothier Field to an elite, unique facility, that we will proudly call home.”
In the meantime, the baseball team and fans will have to adapt to the ongoing construction beyond the left field and fence and around the ballpark. Most significantly, the left field fence now lies at a much shorter dimension, with a temporary telephone-pole fence separating the field from the construction.
The press box, named in honor of former legendary Swarthmore head baseball coach Ernie Prudente, the school record-holder for all-time wins as head coach with 216, will also be an adjustment for the team’s supporters and athletics staff. The press box will include brand new broadcasting equipment, which is particularly useful for the live online streaming of home games.
“Our supporters will not only have an enhanced experience watching our games live, however, our supporters will be able to watch our games with higher resolution [online]… our program couldn’t be happier with the investment made by our administration that will bring everlasting recognition to a true Garnet great,” Gusovksy said.
However, this wait and accommodation will be worthwhile for the team in its long-term effects on the program. Citing a recent example of one of this year’s top-prospects leaving on account of inadequate baseball facilities, Gusovsky claimed, “The renovations will give us an edge in winning recruiting battles with competitor schools. The unique character of Clothier Field will separate our field on a national level.”
Nevertheless, the team understands the significant added responsibility and commitment the construction represents on behalf of the administration. As the season continues, the team will look to improve on last year’s foundation, with eyes set on the Centennial Conference Championship and beyond. Led by a seasoned senior class of outfielder Ryan Burnett ’17, infielder Wesley Fishburn ’17, and catcher Steven Matos-Torres ’17, the Garnet will kick off their 2017 season with back-to-back weekend doubleheaders on Feb. 25 and 26. This warm-up will be followed by the long-awaited Spring Break trip to Ft. Myers, FL with a 10-game road trip. All of this hard work seeks to jumpstart the team into peak form for the arrival of conference gameplay a few weeks later, with hopes of an eventual championship opportunity.
As Gusovsky would emphasize, “I believe that Swarthmore has doubled down on reasonable expectations for our baseball team’s home field, and I know that our players will continue their hard work on and off the field.”
The Garnet will continue to work hard and prove their value throughout the rest of the school year with hopes of winning a conference championship this upcoming May.