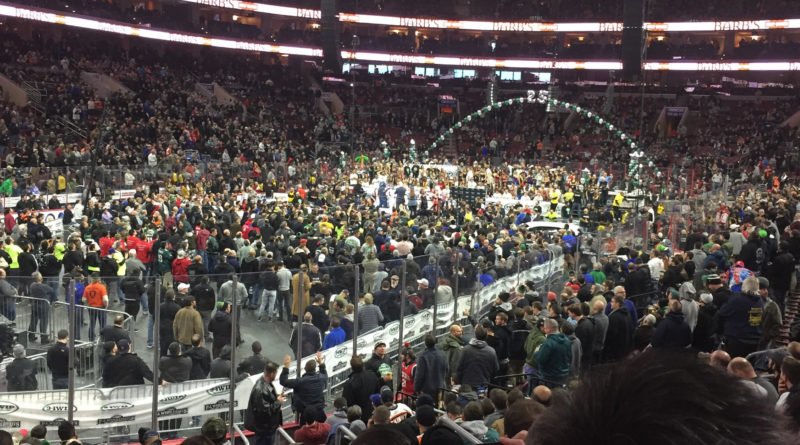 On an average Friday morning, everyone is usually sound asleep in bed, and trying to catch a few hours of sleep before the next day’s classes. Instead, my roommate and I decide to take a 4:30am ride into the city to witness a unique Philly tradition.
When we arrive at the Wells Fargo Center, the surrounding parking lots are filled with troves of tailgating Philadelphia fans. The atmosphere is chaotic. The fans of all the city’s sports teams are packed into one area, reveling in the lively community. The scene of thousands of people, all wearing either USA or local team attire, up at the crack of dawn is a testament to a strong sense of city pride.
Zack Rothenberg ’20 described his first thoughts when entering the sports complex.
“I was shocked that there were so many people up for the event. All of the fans were super rowdy and showed true Philly colors.”
Many fans are shocked by the scene when they arrive at Wing Bowl, as hardly ever are there so many wings and so many people packed into one arena. Despite a slight level of seriousness to this eating competition, this is also an opportunity for Philadelphia to get together and celebrate its uniqueness.
Such a tradition has been around for more than a decade. Founded in 1993, the Wing Bowl is a competitive eating contest held every year on the Friday morning before Super Bowl Sunday. The schedule includes multiple rounds of 26-minute interval “gorge-fests.” Competitors must devour as many wings as they can without violating any of the strict eating guidelines. Outside of the competition, there are also some theatrics.
The Wing Bowl, originally organized by radio host Al Morganti, served as Super Bowl substitute for Philadelphia sports fans, given that the Eagles weren’t performing to their potential. Al Morganti is a popular radio host who has name recognition with almost every Philadelphia sports fan. The Wing Bowl commissioner changes from year to year, but Morganti presides over every Bowl.
Even though this is an important event for prominent competitive eaters, the fans treat the contestants as audience personalities. This is similar to what would be seen in World Wrestling Entertainment. Contestants are brought in on floats and introduced to the crowd before the competition. The organizers also add in eaters with resentful stage names or outfits to Philadelphia fans, such as one contestant wearing a Pittsburgh Penguins jersey and named Pittsburgh Paulie.
The road for any contestant into the Wing Bowl is anything but mundane. Even the path to gain entry into this event is filled with debauchery. A potential contestant must either successfully performing an “eating stunt” on air during The Morning Show at the 94 WIP studios or win a “Wing-off”, a 10-minute eating contest held at a Philadelphia or South Jersey bar. Past eating stunts performed on The Morning Show have included eating 20 cups of cooked oatmeal, eating five Big Macs, and famous competitive eater Joey Chestnut’s offer to drink one US gallon of milk.
The Bowl consisted of several fan favorites including the mighty Molly Schuyler and Notorious B.O.B. (Bob Shoudt), but famous past participants have also left their mark on the sport. Top contestants in past Wing Bowls have made huge contributions to the sport of competitive eating. The famous eater Takeru Kobayashi has set many records, including the hot dog eating record of 110 bunless hotdogs in 10 minutes and the taco eating record of 130 tacos in 10 minutes. Renowned eater Joey Chestnut also has also obtained many prestigious accolades. However, the most wings eaten at the Wing Bowl competition was set by Patrick Bertoletti in 2015 with 444 wings. That is an absurd amount of wings.
“The fans really made the event. There seemed to be a positive feedback loop of energy in the crowd. Every time someone would yell for the sake of yelling that only encouraged others to join in their jeer. There was a cult of personality that seemed to be completely indicative of Philadelphia sports fans,” Rothenberg commented.
Fans from all corners of the city come to experience the degeneracy. When talking to other fans in the crowd, some would either skip or come before work in order to observe this brazen display of excitement. Surprisingly, there were fans that range from as young as 15 to retirement age.
The event is something that you can only experience in Philadelphia. There isn’t another city that would be willing to wake up before daybreak to engage in rebellious festivities and watch the eating of endless plates of wings. It is truly a spectacle that everyone must experience during their time at Swarthmore. Though it may be only for tough-skinned individuals, it is a novelty experience. A fan next to me said it best.
“Just wait until everyone walks outside at 8a.m. with the sun blaring in our eyes and we all re-evaluate our life choices.”