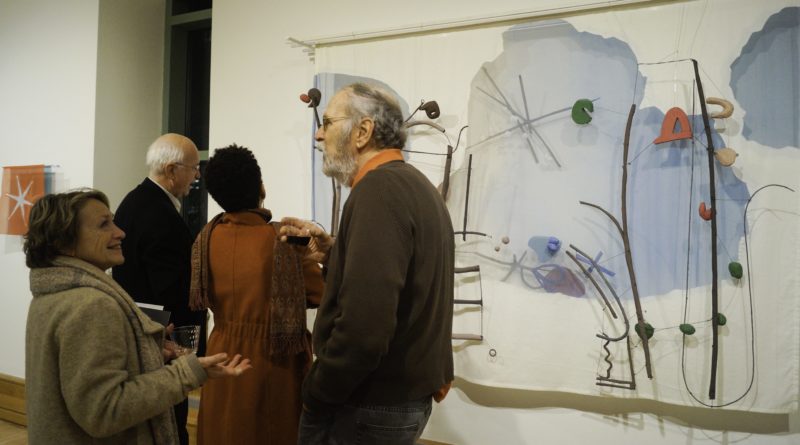 “Floating Drawings,” three-dimensional artwork, is composed of planar elements that “float” before the wall. Paper, wire, and cloth are displayed upon a silk screen, covered in gouache painting, and hang from the List Gallery wall. Meanwhile, the artist, Alexis Petroff, lectures to an audience in the Lang Performing Arts Center about his work, his journey as an artist, as well as the inspiration and process behind his “Floating Drawings.”
On January 19, 2017, the college opened its newest List Gallery exhibition titled “Floating Drawings,” the work of Petroff. Selected as a 2017 Marjorie Heilman Visiting Artist, Petroff was invited to lecture about his work in the LPAC, followed by a reception where the Gallery was officially opened to the public, free of charge. The Gallery includes numerous works by Petroff beyond his “floating” artwork with four accordion books displaying photographs of objects pertaining to their titles: “Float,” “Carts,” “Betwixt,” and “No Rubbish.”
The ideas and inspiration for this artwork include Petroff’s previous works, such as “Tape Collages,” preparatory drawings, Google Maps, and even the List Gallery.
“The inspiration comes from preparatory drawings and collages based on the process of lifting a fragment of reality from its context and placing it into a new one. The aim is to merge the elements to create a whole,” Petroff said.
Even though Petroff currently focuses on 3-D artwork, he has also created previous projects that include collages out of tape and the photograph books that are on display in the List Gallery.
“Approximately 11 years ago, I transitioned from making gouache prints and paintings on paper to making three dimensional work. As I investigated the tensions between drawing and sculpture, in keeping with the ways I approach image making, I found new territory to explore within the space that parallels the wall,” Petroff said.
The process Petroff uses to create the artwork begins with brainstorming ideas for the pieces and sketching them. He then proceeds to execute the idea by first choosing the materials he will use, which include paper, wire, cloth, and A or AA light fastens. These materials in turn tell him how to proceed in interpreting the idea and allowing the object to take “life” as he constructs the artwork. The work includes the painting of some of the materials, cutout of cloth, the arrangement of the different components, and the fastening of the components onto the silk panels.
“[It is] the relationship between the elements in space that constitute my work,” Petroff said.
Before Petroff’s arrival at Swarthmore, Andrea Packard, the director of the List Gallery, met with members of the department of art to discuss potential exhibition candidates for the List Gallery. Professor of Art Logan Grider, who met Petroff years ago as a student at the Art Institute of Chicago, suggested him. The exhibition was unanimously agreed upon, and Petroff was invited to lecture and display his work at Swarthmore.
“[Petroff’s] own journey in art has been a long one and his artistic evolution is ongoing. It embraces the art of many cultures and the phenomenon of both littered streets and digital realms,” Packard said in her introduction of Petroff.
Among the artwork on display in the Gallery is a piece Petroff created for the Swarthmore Peace Library called “Ode to Mahatma.” While researching Swarthmore College last year using its website, Petroff discovered the webpage on the Peace Library and was fascinated by its collection of Mahatma Gandhi’s correspondence as well as the library’s mission statement, “To gather, preserve, and make accessible material that documents non-governmental efforts for nonviolent social change, disarmament, and conflict resolution between people and nations.” He decided to take the mission to heart. The piece is a gift to the library, its shapes are inspired by Gandhi’s spinning wheel, and its colors are an ode to the Indian Flag.
Amongst the planning of the event, flyers went around, programs were mailed to students, and an event was listed as part of the college’s calendar. The attendees of the lecture and exhibit opening included Noah Morrison ’17. As a photographer, Morrison was interested in the numerous types of interdisciplinary forms in image making, which are present in Petroff’s work. Morrison admired Petroff’s approach to his work, even speaking to him about it at the exhibit.
“I understood that there are many ways to produce art and be a working artist, and it does not have to be horribly intensive [or] boring [when] creating a beautiful body of work,” Morrison said.
The “Floating Drawings” exhibit will be on display until March 12 at the List Gallery in LPAC, where there will be a closing event from 3:00 p.m. to 5:00 p.m.