Sports » Columns » For some, the “Ultimate” game 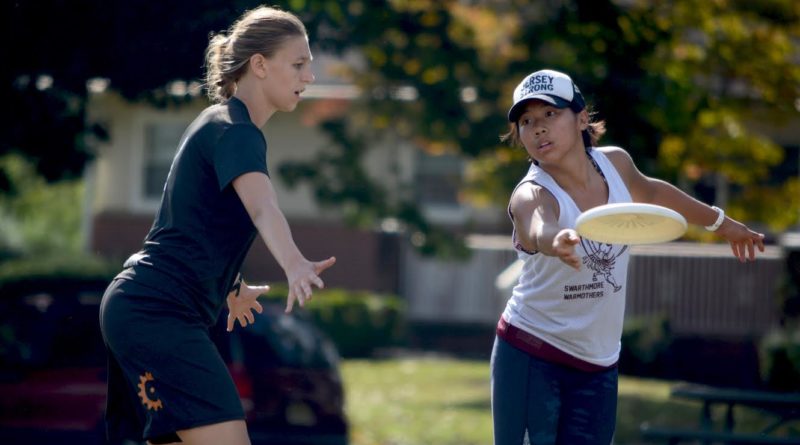 Perhaps the mostly cleverly named teams here at Swarthmore are our Ultimate teams. Both teams use an anagram of our college’s name. The women’s team is called the Warmothers, which is pretty badass, and the men’s team calls themselves the Earthworms, perhaps due to the grit they exhibit on the field. Both teams recently wrapped up their seasons, and are heading for the long, gruelling practice session in the winter, and both teams are excited for their season to come in the spring.
The Warmothers had their last of three fall tournaments two weekends ago at Haverford. This tournament was called “Haverween,” and the players dressed up in costumes while duking it out on the field. Although they didn’t come away with as many wins as they would have liked, the Warmothers were pleased with their showing in the tournament.
“I thought we played hard, and our games were pretty competitive,” said Dini Zucker ’17, one of the three Warmother captains. “I was especially impressed with our showing against an alumni team that featured some high-level club players.”
“We played a few teams twice, and in our second matchup with these teams, we showed a lot of improvement from the first games,” said Tessa Jones ’17, another captain. 12 out of about 20 players are new this year — the rapid growth in abilities among the players has been a great sign for the team going forward.
“Throwing a [disc] isn’t exactly the most natural skill for most people,” said Jones. Only two of the newcomers had experience playing Ultimate in high school, and even for them, the faster pace of college-level play takes some adapting. The team practices three times a week to hone their skills, and these practices will continue throughout the fall.
“I think our practices are similar to most sports. We stretch, we do drills, we do conditioning, and we usually try to end each practice with an intrasquad scrimmage,” said Zucker. With daylight savings coming to an end, and winter sports kicking into gear, the team begins its period of struggling to find space for practice. They use the fieldhouse when they can, and when there’s not any space there, they’ll do conditioning and strength workouts in the Matchbox.
The team is looking forward to their spring season, which is their main season of competition. They’ll have a slate of three tournaments of around eight games apiece, and then, they’ll begin competing in the playoffs.
“I think we have a good team heading into the spring season. We have a few key players returning from abroad, and we’re excited to see how they can add to the team we showed in the fall,” said Zucker.
“I think the whole team has been working hard. We lost a lot of returners, but the younger players have really stepped up. They make lack the experience, but their love of the game has been shown, and it will help lead us to success in the spring,” said Jones.
The Earthworms finished up their season last week at a tournament in New Jersey. They finished 2-3, but two of those losses were close games within two points.
“The other captains and myself were really pleased with our showing last weekend. We were able to stay competitive in all of our matchups while getting everyone, especially the rookies, a lot of playing time,” said Muha Haque ’18, one of the Earthworm captains. The Earthworms also see the fall season as a time of learning and instruction, and they focus on getting ready for the spring season.
The Earthworms also have a bunch of new faces this year, with 10 first-years among the 25 team members. This makes the practices from now until March much more important, which will allow the team to grow together and be ready for the intense competition in the spring.
“I think our group of freshmen is by far the most talented freshmen class that I have seen here at Swat,” said Haque. He stressed the challenges of assimilating new members to the team, but stressed his amazement at the ability and work ethic of the group of first-years.
“Kastan Day and Rye Buckley are two guys with previous Ultimate experience, and they’ve really stepped up and made an immediate impact on the team. Keshav Patel and Ben “XT” Kussmaul have also shown a great amount of promise for newcomers to Ultimate,” said Haque.
The success of the first-years has, without a doubt, been assisted by the leadership of the seniors. They’ve helped keep practices moving along smoothly, and helped keep the team moving in their preparation for the spring. Some upperclassmen to watch will be Max Franklin ’19, Sam Gardner ’19, and Shantanu Jain ’17.
“I am really excited for our spring season this year,” said Haque. He thinks that this year’s team could be the best one he’s been on at Swarthmore due to the mix of returning talent and the excellent group of first-year. The goal for the season is to advance through the sectional round and make it to the regional playoffs. Haque said that this is usually the team’s goal, so he’s thinking this team can make a run this year. Also, he, like most good Swatties, said the other goal of the year is to beat Haverford.
Both the Warmothers and the Earthworms are club teams that are on the lookout for talent. The Warmothers look for new players at the beginning of each semester, and especially in the fall, so new players have the time to learn the game and become competitive players. The Earthworms are always looking for extra team members, and welcome anyone that reaches out to the captains.