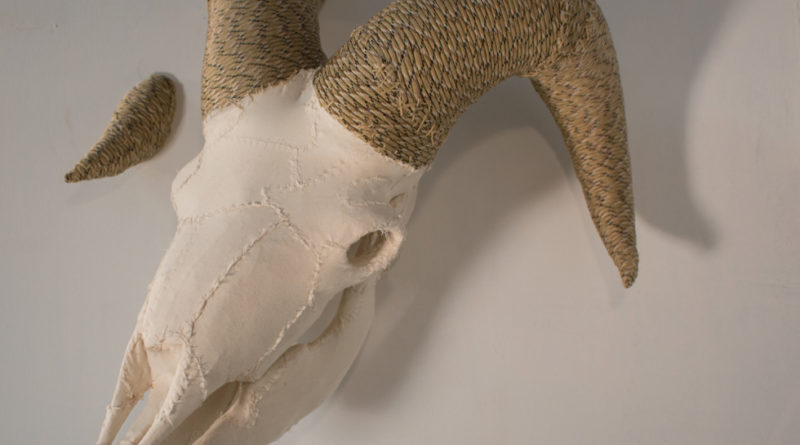 Stepping through a clustered archway of magnetic cyanotype blue butterflies, one comes face to face with one of the iconic ram skulls central to Tasha Lewis ’12’s art installation, a thought-provoking project that uses faux-taxidermy to reimagine the relationship between humans and animals. Her work is on display at the Philadelphia Art Alliance as part of the exhibit “A Curious Nature,” which also includes work by other female artists Linda Cordell, Caitlin McCormack, and Emily White. Although life-sized and hanging, the three ram skulls on the back wall appear not as ominous skeletons but as beautiful relics, their horns adorned with pink and orange yarn and their heads constructed out of cloth. There is an assortment of other colorful stuffed animal bodies mounted on stands – falcons, snakes, and a surreal blue fox at the center of it all, suspended in space with its body climbing through a clear display box. It is as if the room is part history and part fantasy, or something in between.

Lewis began to express freely her interest in sculpture during her time as an Honors student in studio art and English literature, under the instruction of art professors, including Randall Exon and Brian Meunier, who worked closely with her during her time at the college.

“My senior thesis was really about me trying to subvert traditional taxidermy and capturing this essence of nature through totally hand-created, hand-crafted forms. I want viewers to connect at a deeper level with my work. I want to reflect the human impulse to create relics and treasures,”  Lewis said.

At first glance, some of her themes in the installation appear gruesome. In a piece called “The Carcass,” she creates an elk carcass decomposing into a large pane of Plexiglas surrounded by seven ravens suspended from the ceiling. The bones of the elk’s rib cage protrude out of the stage while the body is covered in red and peach cotton patches. The drama is intensified by scarlet cross-stitching. In presenting the embroidery so visibly, Lewis invites us to look at the carcass as a relic of nature that has been distinctively modified by human hands.

Lewis elaborates, “Underneath the exterior, there is no real skull, muscle, or bone and no desire to achieve some type of anatomical correctness. I want viewers to contemplate how humans inflect their interpretations of the natural world in their work.”

While she uses stitching techniques to dramatize the mangled form of “The Carcass,” Lewis also uses embroidery methods to adorn objects and make them what she calls, “more precious.” Using the same beads from her other project called “Full Fathom Five,” in which she creates sculptures of human forms based on the Venus de Milo statue by Botticelli, Lewis embellishes some of her animal carcasses with pearls by stitching them around the skulls. In doing so, she captures how human interpretations of nature can equally sway toward the grotesque or the divine.

The Philadelphia Art Alliance is a certainly a well-suited venue for her new series of animal sculptures. In its citywide initiative Craft Now Philadelphia, the PAA seeks to unite artists who showcase the “City’s rich legacy of craft, its internationally-recognized contemporary craft scene, and its important role as an incubator for arts based in wood, clay, fiber, metal, and glass,” according its website. This focus on craft is one focal point of Lewis’s work, and this installation demonstrated a range of important artistic methods.

On the one hand, she loves to use the cyanotype process, in which a photographic image is printed onto paper or cotton using a mix of chemicals and UV rays, giving the finished product its signature cobalt blue color. Although many blue animal cotton sculptures in the exhibit have been colored using the cyanotype process to create 3D illusions of fur, Lewis seems to be shifting toward new handcrafted techniques.

“My work is more about the labor I put into it and less about the materials,” Lewis states. “My materials are fairly simple: cardboard, tape, and fabric … I want to start relying less on photography to create illusions.”

Indeed, Lewis is shifting toward using more embroidery and stitching techniques to create textures. Unlike some of the other artists of the exhibit who focus on creative mediums, Lewis explains that points to her piece “The Carcass” as embodying the future direction of her work because it relies less on photography and far more on handiwork. In a way, Lewis’s work helps to reimagine the value of employing the traditionally female craft of embroidery and stitching.

Lewis is now based just outside New York City, where she juggles a number of personal projects, including exploring the self-portrait through the lens of Egyptian Canopic Jars, illustrating James Joyce’s “Ulysses,” and most recently, using faux-taxidermy methods to craft animal skulls. Her installation will be available to view at the PAA until Dec 4th.