News » Around Campus » President of Planned Parenthood comes to campus 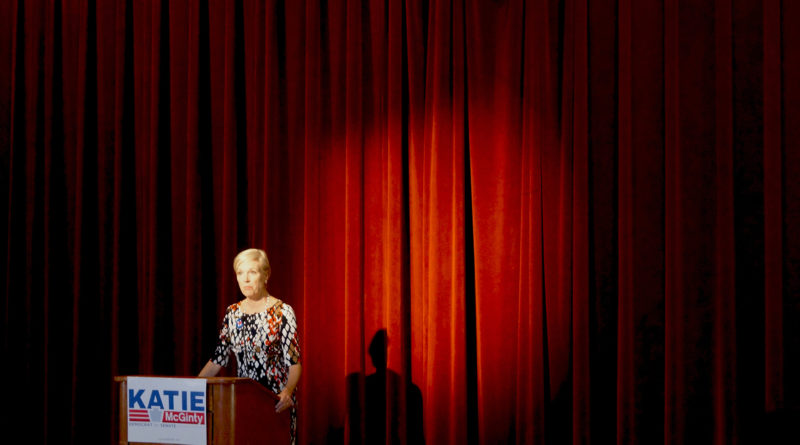 Swarthmore Democrats hosted the Democratic nominee for U.S. Senate Katie McGinty and President of Planned Parenthood Cecile Richards for a rally on women’s rights this past Tuesday. Though McGinty herself could not attend the rally due to a cancelled flight, the list of speakers at the rally included other state representative and senate candidates. Speeches centered around the necessity of Planned Parenthood’s health care services for women, the importance of student involvement in politics, and the denouncement of Pennsylvania’s current Republican senator Pat Toomey as well as Republican presidential nominee Donald Trump.

Barbarann Keffer, the Democratic candidate for state representative in the 163rd district, opened the rally by accounting her own personal experience with Planned Parenthood. When Keffer moved back to Delaware County and was expecting her first child, Planned Parenthood provided her first prenatal care counseling. She later called out Republican legislators like Sen. Pat Toomey and her opponent Jamie Santora for supporting laws that restrict women’s access to health care.

“They don’t think we remember things,” she said in regard to Senator Pat Toomey’s campaign.

“Pat Toomey thought we were snoozing when he said that we should put doctors who perform abortions in jail. But we are paying attention here in Pennsylvania. We are tired of Toomey’s votes against women’s health and we are outraged that Santora would sponsor one of the most inhumane and unnecessary anti-choice bill in the country and then call it common sense,” said Keffer.

The bill Keffer referred to is state House Bill 1948, which has been deemed one of the most restrictive abortion bans in the country. Co-sponsored by Keffer’s opponent Jamie Santora, the bill prohibits elective abortions after 20 weeks and does not provide exceptions for the case of rape or incest.

“When I get to the statehouse, I will be steadfast in warding off the constant attacks against Planned Parenthood by the very conservative right that come year after year,” she said. “Our legislature is 18 percent women. That’s crazy! If we had a legislature that represented truly our population of 51-52 percent women, we would not holding off these ridiculous fights,” she later exclaimed.

All three speakers cited Katie McGinty as someone who would stand up to the divisive rhetoric of Donald Trump and support laws that provide better healthcare for women.

Cecile Richards concluded the rally. She expressed her support for both Katie McGinty and Democratic presidential nominee Hillary Clinton, while stressing how important college students and millennials are in this elections season.

“I’ve never been more motivated to work in an election in my entire lifetime than this one,” she said. “I think without a doubt this will be the most important election of our lifetime.”

McGinty’s election run proves to be quite contentious. According to the RealClearPolitics average of multiple polls across the state, incumbent Republican Sen. Pat Toomey leads McGinty by only 4 tenths of a point.

After denouncing Donald Trump and Sen. Pat Toomey, Richards pointed out the need to continue the national discussion of sexual assault in the country.

“It’s important not only that we win this election, but use this as a teachable moment  to say that we are going to end sexual harassment and sexual assault in the U.S. End of story,” she exclaimed to cheers from the audience. “Every single time Trump insults an immigrant,muslim, LGBTQ individual, or a woman because of how she looks, he loses a vote and our country gains a new activist,” she remarked.

Students who attended felt the rally was crucial toward increasing student awareness about other local races in Pennsylvania.

“With all the air that the presidential race is taking up, it’s important to remember that there are many other names on the ballot too,” said Margaret Christ ’17. Christ is a former president of Swarthmore Democrats and introduced Cecile Richards onto the stage. “Hillary Clinton will need people like Katie McGinty in the Senate and Leanne Krueger-Braneky in state legislatures to fend off the constant stream of attacks like those on our right to choose and to fight for progressive policies.”

“There was a lot of enthusiasm in the room and that is a promising sign that Swarthmore students are taking women’s health issues into consideration when deciding which candidates they’re going to support and fight for. Secretary Clinton is the clear choice for people who support these issues,” she said.

Richards ended her speech by providing a litany of reasons to vote for both Katie McGinty and Hillary Clinton while detailing reasons why Donald Trump is simply unfit to be president. Richards mentioned Clinton’s support for equal pay and paid family leave, support for women’s rights on the international stage, the successes of the Affordable Care Act, and Trump’s temperamental issues.

“The road to the white house leads right through Pennsylvania,” Richards concluded. She called on the Swarthmore community to be as involved as possible in the election process.

One thought on “President of Planned Parenthood comes to campus”