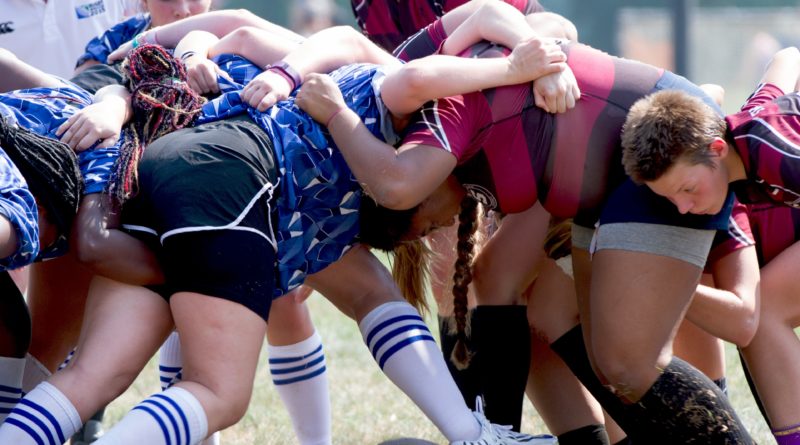 For this past Sunday’s contest, most would have considered the Women’s Rugby team to be the underdog in their matchup against Ursinus. Ursinus has gone undefeated against the Garnet over the past five years, clearly being the more dominant team in the rivalry. The Garnet challenged that status quo this Sunday and broke the trend of Ursinus dominating women’s rugby. After coming off a strong showing at Wesley, the team was unable to translate their success into the first half of their game, especially on the offensive side of the ball. The team played well, but little mistakes and unlucky breakaways resulted in a slow start, giving Ursinus a quick 17-0 lead at halftime. Struggling to score was surprising after the offensive clinic displayed at Wesley. However, the team knew it was not going down without a fight, turning the tables in the second half. Both the offense and defense pulled through with incredible late-game performances.

Ursinus failed to score in the second half after failing to crack through Garnet defenders, finishing the game with 17 points. The offense caught fire, scoring an astounding 43 points in the second half, allowing the Garnet to triumph over the Bears by a score of 43-17, breaking the Ursinus’ five straight years of victory over the Garnet. Leading the team’s come-from-behind victory were captains Alison Rosenzweig ’18 and Ashley Greaves ’18, as well as Sophie Basalone ’18, Gilly Gehri ’19, and Rose Ridder ’19. Rosenzweig credited an incredible performance from the defense for the Garnet’s comeback. She said, “All game we’d been playing really well, winning defensive rucks and scrums to win back the ball.  We had been making a couple critical mistakes on defense and got unlucky on offense at the start of the game. At the half, we had the opportunity to isolate those mistakes and fix them.”

Ridder, who was voted by team members as Rugger of the Match, was proud of the way the team played, saying, “We all played really well though, and definitely rose to the occasion of playing a much harder team.” Rosenzweig also noted Ursinus’ strength saying, “Ursinus is a really strong team, so they took advantage of any small defensive holes we left to score their three tries in the first half.  Once we closed those holes in the second half, we were able to shut down their offense, keep possession of the ball, and focus on attack.”

Leading the way for the Garnet offensively was Basalone, whose offensive display resulted in two tries in the second half. Basalone has been a force to be reckoned with so far this season. On top of scoring two tries against Ursinus, Basalone made things look easy by walking away with six tries against Wesley. Captains Rosenzweig and Greaves have also played incredibly well.

The Garnet’s next contest comes on Oct. 16th, the first Sunday after Fall Break. The team then concludes their regular season with a home game against Lafayette on Oct. 22nd. After regular season play, the team will participate in the Championship Tournament on Halloween weekend.