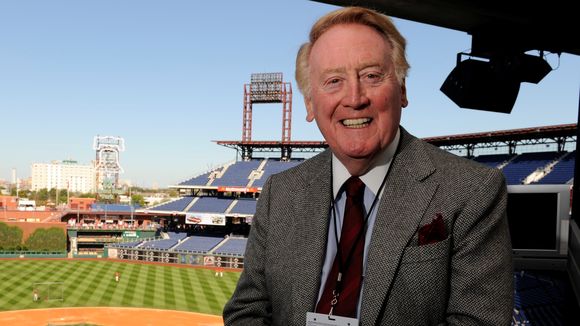 After announcing play-by-play for the Los Angeles Dodgers for 67 seasons, the renowned Vin Scully has decided to conclude his career. Scully, nicknamed “The Voice of the Dodgers,” is well-loved by the people of Los Angeles and Dodger players, alike. In his final game at Dodger Stadium on Sept. 25, each Dodger player took a brief moment to step back, look up to Scully in the broadcasting booth, and tip their helmets to him in respect.

That sunny, southern California afternoon game could not have been a more ideal way to end Scully’s storybook career at Dodger Stadium. Going into the ninth inning, the Dodgers and Colorado Rockies were sitting at a 2-2 tie. In the top of the ninth, Rockies slugger David Dahl drove a pitch over the center field fence for a solo home run, putting the Rockies up 3-2. With the Dodgers down by one run, superstar shortstop Corey Seager came up to the plate and belted a solo home run of his own, tying the game at 3-3. With the game going into extra-innings, Charlie Culberson emerged a hero by sending a ball into the left field pavilion, walking the game off for the Dodgers. In addition to the dramatic finish, the Dodgers also clinched the N.L. West division that day for the fourth year running.

Although the win may have excited many Dodger fans in the moment, Scully is quite used to it, having been around for plenty of Dodger victories. In fact, according to baseball-reference.com, Scully has witnessed over 10,000 Dodger games, six World Series titles, 23 no-hitters, and has done so over the course of 12 presidencies. No other sports broadcaster in professional sports history has been a part of the same organization for as long as Scully was.

Scully’s long tenure in professional sports started with humble beginnings. Scully’s father died when he was only four years old, so the announcer never really got to know him. During his childhood, Scully worked in the basement of a hotel in Manhattan and occasionally delivered mail. After high school, he decided to serve in the United States Navy. After two years of service, Scully began attending Fordham University with the intention of studying broadcasting and journalism. Scully was raised Roman Catholic, and was attracted to Fordham because of its Roman Catholic affiliation and closeness to home.

After graduating college, Scully was rejected from every broadcasting network he applied to – reportedly almost 150 – except for CBS Radio. Red Barber of CBS Radio took Scully with him when he was hired by the Dodgers in 1950. After working alongside Scully for three years, Barber left the Dodgers, leaving Scully all by himself. When the Dodgers made it to the World Series in 1953, Scully was only 25 years old, and had become the youngest person ever to do play-by-play for a World Series game.

Ever since then, Scully has done a terrific job, accumulating accolades beyond compare. Scully has already been elected to numerous halls of fame, including the National Radio Hall of Fame, National Sportscasters and Sportswriters Association Hall of Fame, and American Sportscasters Association Hall of Fame, who also named him Sportscaster of the Century in 2000. To honor his greatness, Bud Selig, commissioner of the MLB at the time, presented Scully with the Commissioner’s Historic Achievement Award. This award has only been given out to 14 people in the history of professional baseball.

One of the greatest moments in Scully’s career came in 1988. One could never forget hearing him narrate the emotions of Kirk Gibson’s walk-off home run in the 1988 World Series, after watching Gibson limp his way up to the plate and face Dennis Eckersley, the most dominant closer in the game at the time.

Although Scully will be missed, Dodger fans will never forget hearing his voice on the radio or television during some of the brightest moments in Dodger history.