Sports » Columns » A tribute to The King, Arnold Palmer 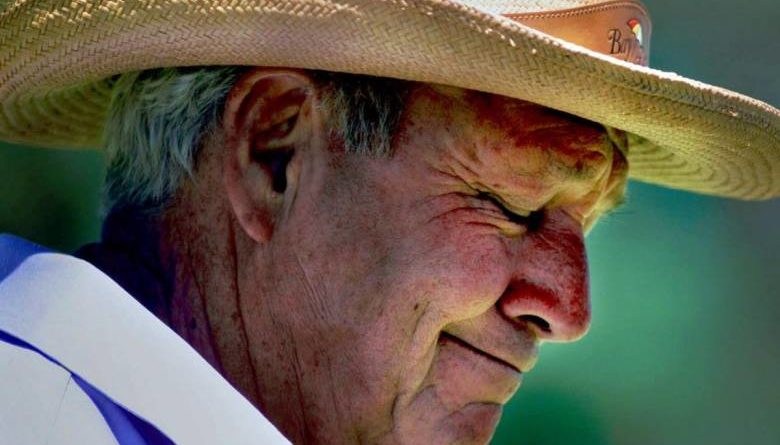 When most people hear the name Arnold Palmer, they think of more than just a golfer. Arnie, as he was called, led a revolution among athletes, transforming the world of sports into a true business place.  Palmer exclaimed, “Success in golf depends less on strength of body than upon strength of mind and character.”  His life followed such sentiments. He was an entrepreneur, getting into the clothing, beverage, and even aviation industries.  Palmer left more than a legacy behind: he laid the foundation for the future of golf and all of professional sports worldwide.

Palmer is an icon in part because of his humble beginnings.  He was born and raised in the small town of Latrobe, just outside of Pittsburgh, Pennsylvania. He went on to play golf at Wake Forest University, but left after three years to pursue his dream of being a professional golfer. Palmer’s confidence and trust in his own potential was infectious and ultimately led to the growth of a cult-like fan base, more commonly known as Arnie’s Army.

Palmer first learned the game of golf when his father handed him a golf club and watched how his son gripped it. He then proceeded to tell Palmer to never change his grip, and to never let anybody in the game take that away from him. Palmer’s golf swing is a further model of his father’s early sentiments.  This rigid motion personifies Palmer — not necessarily a textbook mold of success, but scrappy and efficient above all else. Swarthmore students can appreciate this trailblazer who constantly redefines the path of success in all endeavors.

While our generation never got to watch Arnold Palmer walk down the lush fairways of Augusta National, just moments away from capturing his first Green Jacket, or emotionally taking the interview stand at Oakmont after playing in his last U.S. Open Championship right in his hometown, these moments are ingrained in the minds of all aspiring golfers, regardless of age.  The emotion that Palmer displayed on and off of the golf course was simply unmatched.  He attracted so many new fans with his charisma and added a different dimension of style to the game.  Palmer was one of the first Americans to travel to Europe and Asia and compete professionally.  He was perhaps even more beloved in the U.K., where he won back-to-back British Opens in 1961 and 1962.  With a total of 76 professional wins and 7 major championship victories, there is no doubt that Palmer is one of the greatest golfers of all time.

Palmer’s contributions to golf after his retirement are perhaps even more noteworthy than his feats in competition.  Palmer opened up hundreds of courses around the world in an effort to expand the game of golf. Palmer also started the first golf-focused television channel, the Golf Channel, which has expanded golf coverage tremendously over the past 20 years. He sponsored a PGA event in Orlando, Florida, in an effort to combine a world class tournament with a fundraising platform for his children’s hospital and foundation. He has been spotted at golf’s most cherished event, The Masters, year after year, hitting the inaugural tee shot with his fellow competitors, legends and dear friends Jack Nicklaus and Gary Player.

While Arnold Palmer is no longer with us, his legacy is stronger than ever.  The sport of golf wouldn’t be where it is today without Palmer’s trailblazing innovation and charismatic personality. Swatties can learn a thing or two from Palmer’s ability to persevere and succeed in all the fields he explored. Our caps are off to you, Arnie.