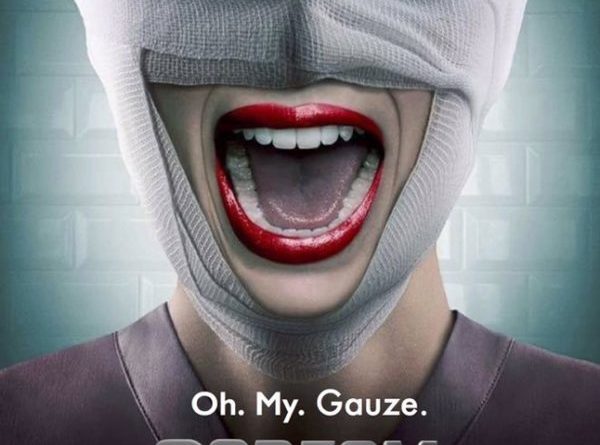 Just like the opening of season one, Scream Queens started off the second season with a party full of obnoxious characters who could care less about a person in need of medical attention. And just like its season one counterpart, the person in need dies because the other characters would rather party than call for help. It seems that the second season is mirroring the first season by continuing the theme of the past affecting the future. In season one, a sorority sister died due to childbirth during a Kappa Kappa Tau party. In the beginning of season two, a hospital patient died because the doctors were too lazy to operate on him since a party was in motion.

The second season of Scream Queens kicked off on September 20th, promising to be funnier and scarier than before. Fans of Ryan Murphy shows should take this promise with a grain of salt. If you keep up with American Horror Story (AHS), you will know that each new season claims that it will be the scariest, which I find to be untrue. In my opinion, the series is going on a steady decline in quality.

Scream Queens follows the anthology format like AHS, but instead of having an entire new set of characters, the show keeps the “final girls,” the trope of keeping the survivors around for the next season. This season moves the survivors, which is almost the entire original main cast, from a sorority house to a hospital. Except, it does not feel like anything has changed other than the setting. The characters have not grown from the events of the first season, which is basically watching the secondary sorority and fraternity characters die, and they feel very static.

Let’s begin with Cathy Munsch (Jamie Lee Curtis), formerly the dean of Wallace University and now the head of C.U.R.E Institute, a hospital dedicated to curing the ‘uncurables,’ such as patients with genetic disorders. This career trajectory seems odd for Munsch because her character arc ended in season one as she became the face of “new new feminism.” According to her, she was at the height of her success after advocating for “new new feminism” and she needed a new project to tackle. I would think that the most sensible thing to pursue after being the face of such a huge movement is politics. However, Scream Queens is not grounded in reality and the show decided to go in an absurd direction by being set in a hospital because the location has some scary connotations attached to it.

Because of Munsch though, the original cast is able to be reunited. She hunts down Zayday Williams (Keke Palmer) in order to pay for William’s medical school bills and to enlist her to work for C.U.R.E. Williams had the most reasonable storyline of the episode. After graduating from Wallace University, she got into medical school and tried to get as far as possible from the events in Wallace. The only odd thing surrounding Williams is Munsch’s particular interest in her.

The introduction of the Chanels is the same as it was in season one, Chanel Oberlin (Emma Roberts) waking up in bed to see her two minions standing before her. Chanel greets #3 (Billie Lourd) and #5 (Abigail Breslin) with her classic line, “Good morning idiot hookers.” However, her delivery was more somber this time around because the Chanels are starting off at the bottom, meaning they lost all their popularity and money. They were convicted for the Wallace serial killings last season, but were later released because the true killer confessed. Through an award winning Netflix documentary series, the Chanels became sensations again, but their public image was never recovered.

The Chanels’ placement into the hospital is one of the most absurd things that happens in this episode. Williams requests to include more female doctors in the hospital and Munsch agrees. Instead of finding licensed female doctors, she finds the Chanels. Bringing in Williams and the Chanels out of the blue makes the viewer wonder, what is Munsch planning? Hopefully the answers that will be provided this season will come gradually instead of all at once during the final episode.

I did not laugh as much in this premiere as the first. I think that partly has to do with the setting. Having horrible-acting characters in a hospital setting does not deliver the same humorous punch that having the show set in the sorority did. The first season felt more like it was making fun of the sorority life on campus by depicting the ultimate mean girls and their antics. This season lacks this kind of connection between the characters and the setting. This seems like a fleeting attempt from the writers to keep these original cast members as long as possible.

You may have noticed that I have not talked about the new characters introduced in this season. I find that they do not add much to the show so far. The roles of Dr. Cassidy Cascade (Taylor Lautner) and Dr. Brock Holt (John Stamos) appear to just provide attractive people for the viewers to look at. I am hoping that the next episode will feature more screen time for Denis Hemphill (Niecy Nash) and Hester Ulrich (Lea Michele) because they usually get great one-liners to deliver.