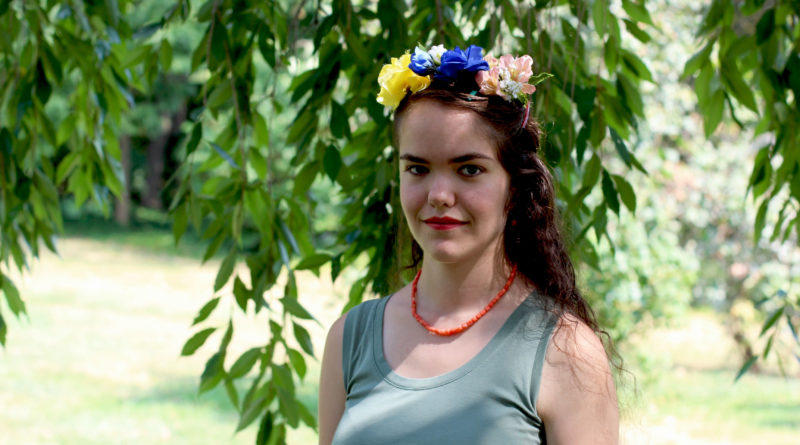 “I sort of set my goal to be writing poetry that reads like smut and smut that reads like poetry,” Hughes says. She laughs, leaning back, crossing her blue Converse All-Stars over her baggy pants, and adjusting the crown of flowers resting on her forehead. “I think I [wrote] that on one of my online dating profiles. That’s really pretentious.”

In eighth grade, she found her first book of poetry, a 1966 textbook by X. J. Kennedy, in her parents’ bathroom. After turning to “We Real Cool,” by Gwendolyn Brooks, she was hooked. Hughes memorized her favorite poems — even now, she can recite the entirety of T. S. Eliot’s “The Love Song of J. Alfred Prufrock,” five pages and over a thousand words long. Now, the copy sits in her house, battered from use.

What emerged from her work over the summer, she elaborates, is an investigation into emotional honesty and opacity.

“I’m interested in an interplay between exposure, and vulnerability, and self protection through cleverness,” she says. “That’s something I was trying to explore — moments of confession and moments of emotional expression that are trying to cover themselves up or disguise themselves.” The narrow, granular nature of poetry, she explains, enables that. “I get to show part of a picture, or to show it from an angle.”

Despite her personal style, Hughes’ poems are a testament to precision, each word loaded with as much significance as she can manage. In contrast, she finds the messiness of everyday speech, with its fragmented thoughts and run on sentences, profoundly unsatisfying.

“I could very easily spend all my time analyzing the thing I said at Sharples, [or] what I should have said differently, or what I should have not said. The nice thing about getting to write a poem is that I have control over that.”

Hughes’ impulse to revise means that much of her work centers on going over old poems rather than new works. With the grant, though, she tried to produce more new material. “Part of this summer was getting comfortable with writing things that rambled and that I wouldn’t really want anyone else to see.”

She worked four days a week with the Trevor Project, an organization for suicide prevention among LGBTQ youth, and wrote on the weekends.

“That structure was really essential for me,” she says. Although she didn’t find much overlap between her writing at the Project and her poetry, letters to government agencies and legislators require their own neat phrasing, she says almost like poetry. “Obviously, it’s a completely different genre and topic, but it kept me in the practice of writing every day.”

She ended up finishing three complete poems as well as beginning and editing many more pieces.

After graduating high school, Hughes spent a gap year campaigning for gay marriage in Rhode Island before taking her freshman spring off to organize volunteers for an LGBTQ non-discrimination bill in Utah. Afterwards, she wasn’t sure if she wanted to return to college.

“I had a year without school to do stuff I really cared about and that I was pretty good at,” Hughes says. “It was the first time I developed a primary identity aside from ‘student.’” Without another offer, though, she resumed classes.

Hughes, a self-proclaimed copycat, consciously imitates the writing styles of favorite writers like former U.S. Poet Laureate Kay Ryan, whom Hughes admires for her clever phrasing and confessional tone. She still feels like she’s in the process of trying on others’ styles.

“That doesn’t feel inauthentic to me … I can dress very differently on different days, and all those ways feel like accurate expressions of some part of me at a given time.”

Majoring in English was never a certainty — even now, Hughes hasn’t officially declared. She moved between political science, linguistics, and several other fields before deciding in the middle of last year to focus on creative writing out of resignation, she says.

“I came into school knowing that I was ultimately going to be an English major … but that seemed so predictable.”

At one point, Hughes wanted to be an actress. In high school, her class traveled to New York City to meet an off-Broadway star for career advice.

“She told us, ‘Yeah, I worked for years, and then my big break was when I became the face of the Scotch Tape commercial.’” Hughes laughs.

Although she’d like to have her poetry published, she struggles to see a career in it.

“There’s probably a lot of becoming the face of the Scotch Tape commercial that has to happen before publishing a book and after you publish a book. I don’t know [if] that’s something I want to do.”

After graduation, Hughes plans to look for more LGBTQ activism campaigns to work on, whether organizing in the field or writing policy in DC. She worries she might struggle to maintain her habit of writing every day. “I just kind of wonder how adults who work nine to five or longer have time for having food, sustaining relationships — doing laundry, all those fun things — let alone [maintaining] artistic practices.”

Another dream job? Writing erotica. “I didn’t get a grant for that, though.”