My love affair with Swarthmore College began long before Swatlight and Swatstruck, a two-part event for accepted students formerly known as “Ride the Tide”. I first heard about Swat the fall of my junior year of high school, when my sister mentioned her coworker had gone there and suggested that I look into it. In an effort to end the conversation around college quickly, I said I would and filed the information in the far back of my mind.

I didn’t think about it that much until my senior year when I applied to Discover Swarthmore. If I’m being completely honest, I really don’t remember applying at all. Amazingly enough– and probably by some accident–I got in. I was elated. A school wanted to fly me out and visit for free? Heck yeah! Still, I had gone into the weekend prepared to be bored out of my mind. I figured the most I would get out of it was a t-shirt and a few days off of school– I was in for a surprise.

Having just taken a red-eye, I disembarked and took an early morning ride to campus. In the distance, I could see what I assumed was Philadelphia. I felt a strange tug in my gut but chose to ignore it. When we arrived at campus, I hopped out of the van and felt as if time suddenly slowed down. There it was. The moment and the feeling everyone had told me about had finally happened to me. I breathlessly snapped a picture standing on the circle outside of Parrish Hall, the sky still a light purple. Could it be possible? Did I just find my dream school? I couldn’t deny that I had gotten “the feeling”. I remained skeptical, chalking it up to my first time visiting an east coast college.

But as DiscoSwat progressed, it became incredibly clear to me that I had most definitely fallen in love with Swarthmore College. I loved the campus and the small-town feel and the proximity to a big city and the opportunities available to Swatties. When I asked people what their favorite thing about Swarthmore was, there was a resounding and consistent answer: “the people.” At first, I thought this was a really scripted and vague answer. But I quickly realized that I felt the same. Every student I had talked to was kind, passionate, and genuinely interested in what I had to say. I had completely expected to be treated like a twelve-year-old, but the students saw me as an equal and were happy to answer any questions I had. They made me feel at home.

I was left debating whether or not to apply early decision. I was afraid that if I did, I would later regret it and blame myself if I ended up disliking the school. But I was also afraid that if I didn’t, I wouldn’t get in. In the end, I chose not to– a decision that I’m really glad I made. However, the months between DiscoSwat and Swatstruck seemed far too many. I spent a majority of those absolutely convinced that there was no way Swarthmore would ever want me. It must have been a fluke that I’d gotten into DiscoSwat in the first place. I became obsessed with statistics– would my chances increase because I’m from California?— and I even briefly considered looking into gap-year programs.

By early April, the acceptances were starting to trickle in. I was happy, but it didn’t compare to how badly I wanted to receive the acceptance letter from Swarthmore. There was still time, so I focused all of my energy on not thinking about it. One night, I came home late from a friend’s birthday party. On my pillow, there was a letter from Swarthmore. It was strange considering I wasn’t expecting the letter to show up anytime soon, let alone on my bed. A voice in the back of my mind opened its mouth but I quickly shut it. I ripped open the envelope, pulled out the letter, and spent the next two hours alternating between screaming and crying. I have never seen such beautiful words as, “Congratulations and welcome to the Swarthmore College Class of 2020!”

Coming back to campus for Swatlight and Swatstruck was such an amazing feeling (I got to escape from high school for three whole days!). I had committed the week before the program, so I was all ready to go. Getting an extra day through Swatlight was especially awesome. The extra programming and events geared to first-gen, minority, or low-income students were definitely beneficial and allowed for us to get a better feel of campus. I absolutely think it should be continued because it gave specs the time they needed to get comfortable. Not to mention that a lot of the specs who came for Swatstruck were there with their parents– a luxury others couldn’t afford. Swatlight not only served as an extra day for some, but also as a testament of Swat’s dedication to provide opportunities for minorities that we wouldn’t receive elsewhere. Honestly, I wondered how many other schools would fly me out twice just to visit? I was happy to see that Swarthmore didn’t bat an eye when it came to this kind of financial support and that it truly emphasized the importance of its cultural centers. It proved to me that not only was Swarthmore accepting us, but that they wanted us. I felt special, as if we mattered to them– something that I believe larger schools fail to do.

With the extra day, I was able to do things like meet up with my host from DiscoSwat, hang out at Essie’s with Boy Meets Tractor, pop into Dunkin’ Donuts, spend way too much time (and money) at the bookstore, snooze in the library, and stuff myself at Sharples. (Side note: at one point I was eating alone and a few students asked me if I wanted to eat with them. That’s basically my impression of Swarthmore in a nutshell).

Alas, the next two days rushed by, and I couldn’t believe I was once again standing on College Ave, luggage and sleeping bag in hand. I had grown quite close with the kids from Swatlight, but I had failed to talk to many of the students who had arrived the following day (although this was probably because I had shared two flights and a layover with Swatlight kids). I jumped at the chance to talk to new people at the airport. Many were still considering other schools (something that horrified me, a die-hard Swattie). Obviously, there were the big-ticket schools like Harvard and Princeton that had managed to grab the attention of some specs. And others just weren’t feeling it. I did everything short of tattooing “Choose Swat” on my forehead to try and convince people to go. Because that’s how much Swarthmore already means to me. I felt as if people were genuinely hoping to see me next year. While I know that it will be a difficult transition with an overwhelming workload, I am also constantly reminded of how rewarding the experience is and that the people make it a gazillion times better.

As May 1st draws nearer, I am reminded of the famous quote, “A journey of a thousand miles begins with a single step”. My journey here began the second I stepped onto 500 College Ave. Wherever your single step leads you, whatever Statement of Intent to Register you submit, I hope your journey is everything you ever wanted. So to the specs, I say good luck, and I hope to see you again. 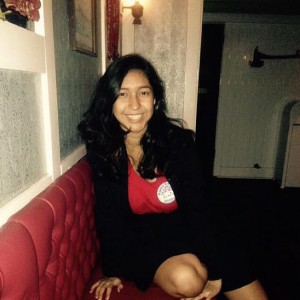 Rebecca Castillo is a first-year from Los Angeles who has yet to sync her laptop’s clock to eastern time. She doesn’t like coffee and was once blown off by Aziz Ansari. In her spare time, she enjoys watching comedy shows and casually dismantling the patriarchy. She plans to pursue a career in storytelling, specifically as a writer for a comedy show.