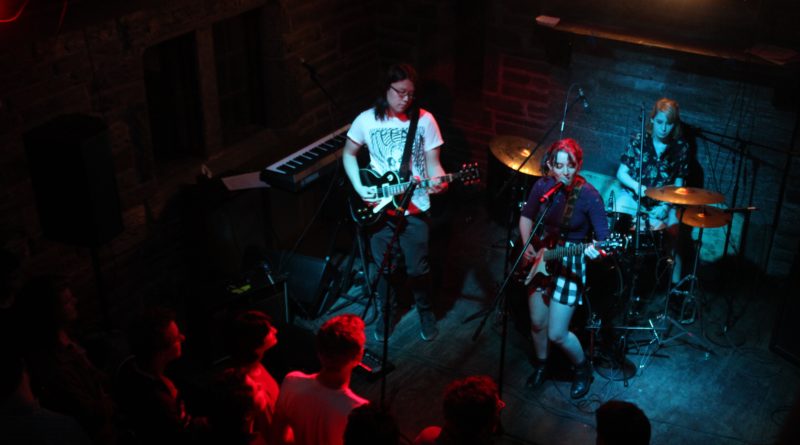 The self-proclaimed punk-poem band Biscuit who is out to have fun and share that fun with Swarthmore played last Friday night at Swarthmore’s Battle of the Bands in Olde Club. The musicians, bass guitarist  Kyung Min ’18, singer Colette Gerstmann ’18, and drummer Zoey Werbin ’18, formed Biscuit in the fall, though they can trace their origins to when Min and Gerstmann met freshman year.

“We [Gerstmann and Min] met when we lived in ML together, and we always talked about making a band. And then I guess it never happened until I texted [Min] last semester and said, ‘we need to start a band,’” said Colette

“And I’ve always wanted to be a drummer for a band and I just recently started playing the drums for them because they needed a drummer. I am also Colette’s roommate so it all made sense,” said Werbin.

When asked to explain their curious band name ‘Biscuit” they noted that there really was no story tied to it, and it was just because it sounded fun and that’s what they wanted their band to be about.

“It’s funny because we keep getting asked [why we chose our band name Biscuit], and we kind of just wrote a list of names we liked and this was the one we liked best. But I guess I like things that are named after food items because it’s fun and sugary,” said Gerstmann.

The band describes their own music as ‘punk-ish’ although Min admits that he “cannot place his finger on it.”

“I just kind of like writing poems and I would send them to Kyung and he would come up with these amazing riffs and then we put it together and see what kind of beats sound good with it,” said Colette

Werbin and Gerstmann live in the barn together and sometimes they and Min go into a room and just try things out.

It was Werbin’s first time performing last Saturday, and she describes her experience as a lot more fun than she expected.

Biscuit is a fun band that loves sharing their creations and seeing people have fun and dance to their music.