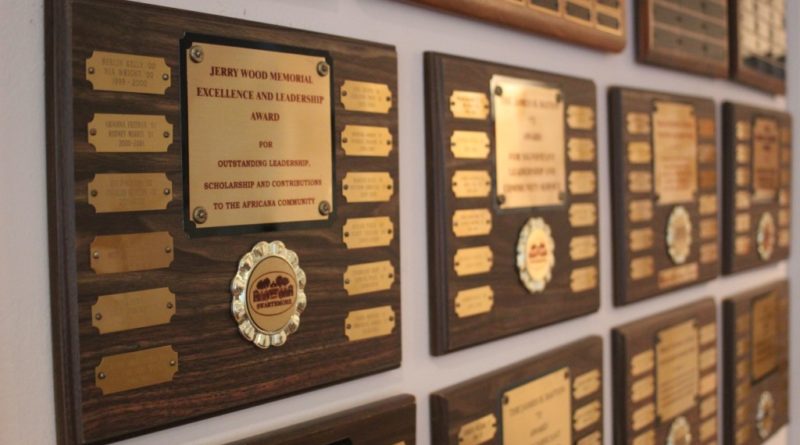 Swarthmore’s Black Cultural Center, located in the Robinson House, has been a cardinal place for students throughout the years. The BCC was founded after a series of actions from Black students who campaigned for increased representation in the student body as well as faculty. After a series of nonviolent protests including sit-ins, hunger strikes, and occupation, the Robinson House became the Black Cultural Center in January, 1969.

This activist history is embodied in the many framed photos that line the walls. On the living room wall, there is a photograph of the original Swarthmore African American Student Society members as well as a photograph of the group’s current members. The BCC is complete with a kitchen, a computer room, a library, a classroom, lounges, and study rooms. This hard-earned space  houses many artifacts and objects honoring Swarthmore’s Black history.

One of the most talked about objects in the BCC is Don Mizell’s, class of ’71, grammy. Mizell won the 2005 Grammy for Album of the Year as a producer on Ray Charles’ album, “Genius Loves Company.” He donated the award to the College in 2014. Mizell’s contribution to the BCC is particularly significant because, during his time here, he was among a large number of students who worked for Black acknowledgment on campus. The Grammy currently sits in a glass case on the dining room wall.

There are a myriad of objects that hold prestige, such as statues from student trips to Ghana as well as plaques commemorating students and alumni for their hard work in the community. However, it is the seemingly commonplace objects many students have warm feelings toward.

While giving a tour of the BCC, Al Brooks ’16 walked into the side room on the first floor and rested his hand against the upright piano. “I loved practicing with the gospel choir in here,” he said.

On the third floor, there is a closet full of old robes that former Gospel Choir members wore. “I always joke that I want the choir to perform in these robes one day, but no one else will do it,” Brooks laughed.

Brooks also pointed to Mjumbe, a literary magazine focusing on students and the African Diaspora, as well as the Muslim Journal. As he picked up a copy of the paper, he noted the importance of religious diversity within the Black community.

Brooks turned to the brown, paisley colored chair in the living room. “This chair,” he tapped it with his finger, “I remember Paul sitting in this chair, in his reign — sitting in quiet judgement,” he laughed.

The man Brooks was referring to was Paul Cato ’14. Now a graduate student at University of Chicago, Cato once held multiple esteemed positions on Swarthmore’s campus, including SASS President and ABLLE Co-advocate. He is also recognized on the plaques hanging on the wall for honors such as the Freshman of the Year Award and the Jerry Wood Memorial and Excellence in Leadership Award during his senior year.

As an alumni, Cato reflects fondly on his time as an active member of the Black community at Swarthmore. He was particularly thankful for was the BCC library and its wide array of books.

“As you go upstairs and take a look at the books in the library, you see that they aren’t just black literature or black history books. They’re books like Lester’s Look Out, Whitey! Black Power’s Gon’ Get Your Mama.”

Brooks is thankful for the BCC library as well, “You see the great contributions Blacks have made to the academic world–how much has been written about us, our community, and our struggles.”

Cato noted the historic significance of both the Robinson House and the BCC as a Swarthmore institution. Cato discovered the BCC during his weekend at DiscoSwat and fell in love with its revolutionary history as well as the memorabilia and artifacts.

“It was filled with the same kinds of artwork, books, posters and articles that you would find in a museum. But for some reason you could tell it wasn’t a boring ‘center,” Cato said, “Being from DC, I had a sense of buildings being more than just physical spaces — the White House, the Capitol, the Pentagon–all those represented more than just office buildings or living spaces, and the BCC was like that, but a home.”

Cato mentioned being particularly enthralled by the history of student activism that led to the BCC. “Being an angry Black high schooler at a rich, preppy, white high school in D.C., I was so inspired and I thought it was the coolest thing ever,” Cato said.

A student-made admissions pamphlet from 1969, “Black at Swarthmore,” described the Black Cultural Center as “a base for reinforcement and definition of Black identity, an anchor in a white sea, a psychological and geographical point of reference […] the center provides a situation conducive to meaningful cultural interaction. But obviously its main function is a place where you can be.”

The experiences of Cato and the Black students of yesteryear are not dissimilar. Ultimately, the atmosphere of the Black Cultural Center has served as a cultural mooring for many students, including freshmen.

BCC Intern, Julius Miller ’19 recalls the first time he set foot in the BCC, “As soon as you enter, you get this warm and cozy feeling. You see the kitchen and you see the living room — It really does function as a home.”

Jada Smack ’19 has grown particularly attached to the classroom on the second floor. “My favorite room in the BCC is the classroom upstairs because it’s filled with pictures of former Swarthmore students of color in learning environments and classroom settings. It reminds me that I belong here — that I too am meant to be here.”

Legacy is a consistent theme in the BCC environment. Al Brooks ’16 notes the importance of the legacy contextualizing his Swarthmore career.  “You know, it’s easy to think ‘I’m here. There was nothing here before me, and there won’t be anything after,’ but these articles and pictures, they prove that wrong.”