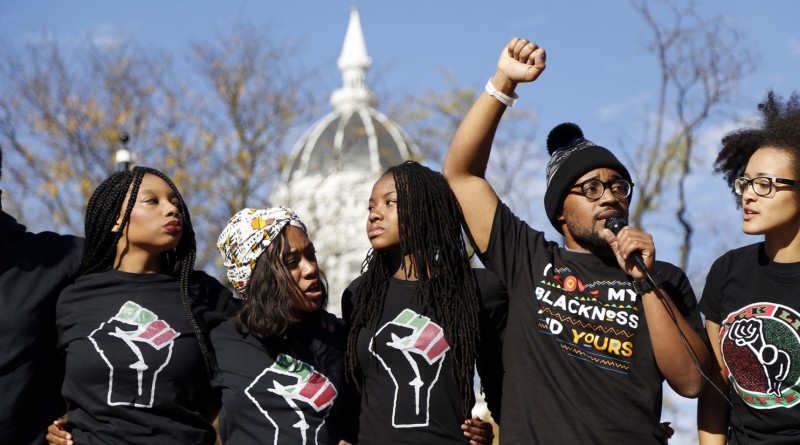 Over the past several months, race has been a focal point on college campuses. After the protests over the handling of racism at the University of Missouri and backlash over an email sent at Yale insinuating that restricting insensitive Halloween costumes was limiting free speech, many people are discussing the racial issues facing colleges across the country. Questions began to emerge about whether it is the role of white students to take an active role in issues such as these and how best should white people engage with and talk about race.

Swarthmore has not been immune to these issues. This past fall, the faces of students of color were cut out from the French board, spurring outrage and disappointment from the administration and students. As the community reflected on the incident, students of all different backgrounds, cultures, races, and ethnicities were present.  Several students from Swarthmore offer their perspectives:

I think it’s important for white people to take an active role in these issues. But, I think the problem with the way we have set up discourse on identity issues is that it precludes those with privilege from discussing these issues unless they align with the “ally” perspective. I think this leads to a culture where people worry that if they say something that goes against this perspective – or even if they say something that doesn’t obviously align with it – that they will be treated as ignorant or insensitive at best or denounced as racist or bigoted at worst. And as a result, white people feel silenced. I’m not saying it’s by any means bad to promote minority voices, but the problem with silencing white voices is that it leads to resentment that bubbles under the surface until someone like Donald Trump brings it out into the open.

While I do think that some white people learn to be more sensitive from these situations, I think the fear of being silenced for lack of “political correctness” is understated, especially at Swarthmore. For example, Justin Pontrella ’19 wrote an article recently on how he feels conservatives are disrespected at Swarthmore. In response, many conservative people on campus said they agreed with him but felt that they weren’t able to express these opinions openly, which is why they commented anonymously. Conservatives and people who don’t identify with the principles of allyship aren’t exactly the same group, but there is some overlap and parallels.

This fear of silenced seems to manifest itself more than people using this argument to silence others, as social justice advocates often claim. If anything, I think it seeks to encourage more discourse, not less. Thus, while white people don’t experience racism in the way that minorities do and therefore cannot speak from the experience that many minorities have, we should not exclude them from dialogue altogether regardless of whether or not they agree with the “allyship” perspective.

In general I don’t think white people should take a lead role in campus racial issues, but I think they should absolutely take an active one when they’re able. What I try to do is really understand where protesters’ anger and grief comes from, say in the case of the Yale Halloween email controversy last fall, and to empathize with them to the best of my ability. Then I try to share that with other white people. Before I do anything I try to ask myself, am I talking over anyone? Is what I’m going to say already being said to the same audience by people who are saying it better than me? If so I can just share their words. And finally, am I considering doing this because it’s the right thing to do, or because I want to look and feel like a good guy?

We do have a problem at Swarthmore frequently with people not assuming good intent. I think assuming good intent is incredibly important. But in a lot of cases I think white people’s’ fear of being called out and silenced is exaggerated. At Swarthmore there are people who believe they have a license to be as mean as they want to anyone as long as they feel they have moral high ground. (Three years ago a Swattie wrote an essay literally titled “Fuck Your Constructive Dialogue.” It’s an interesting read if you Google it.) And I don’t agree with. I read Justin’s editorial and completely agreed with it.

At the same time, while I think privilege dynamics between individual Swarthmore students are more equal than privilege dynamics on a national or global scale, it’s important to recognize they still very much exist here. As liberal as Swarthmore is, students from different racial groups still don’t approach dialogues on equal footing. Sometimes white people need to be reminded to step back, and sometimes they mistake this for silencing.

To an extent, I think that the discomfort that white people feel talking about issues of race is a good thing. That feeling is a reminder of their social position vis-à-vis people of color, and the fact that they simply experience the world differently than people of color. Now, that discomfort should not preclude white people from entering the conversation. In fact, alienating anyone does not make for a productive dialogue.

Further, and with regard to the idea that discomfort is a good thing, white people should also see the discomfort that they feel as a reminder that people of color feel uncomfortable everyday, especially in a predominantly white space like Swarthmore. These everyday experiences deserve just as much attention as the major instances of discrimination. Finally, when considering the role that white should play in these conversations, it is important to assume that everyone coming into the conversation has good intentions. Thus, until proven otherwise, it would be helpful that white people want to gain a better understanding of the experiences of people of color.

I think we do absolutely no justice to any cause by silencing any group of people. A dialogue can’t be equal and can’t be sane if one person has to acknowledge that somehow or in some areas they are simply given less credibility or aren’t really listened to because of their race. Also, I think this idea of discussing race seems a bit vague. For example, at Valerie Smith’s talk where there were very few white people there. I think that’s being looked into a bit too much.

I disagree, for example, about the Asian students at Oberlin – I felt like that was a terrible waste of time and something that shouldn’t be complained about. Otherwise you open grievances for every small thing a group/organization/school/person does to not accommodate and sometimes we need to acknowledge a radical idea – maybe, just maybe, we can’t accommodate or shouldn’t accommodate or put down or elevate anyone.

I find questions of the latter unproductive. In my mind, anyone should have the right to speak about things they think. But should people with little relative experience about something be granted credibility? Probably not. The way I’ve heard it put by many people of marginalized groups is that it’s exhausting to have to deal with the feelings of people who aren’t actively harmed by a situation but are just experiencing cognitive dissonance when you are the actively injured party. Frankly, reduced to the level of the individual, such a situation is a little absurd.

Fundamentally, though, I think actively pushing away people who are confused and want to learn more seems like a poor solution. I think it’s possible to conceive of a space in which we as a school support those who are confused but well intended, even if it means having to put up with a little of the “I have thoughts that are important to share” bit. Some opinions and perspectives are based on facts and frameworks that are fundamentally misguided. I think that’s a harsh thing to say, but I think it’s a reality we need to acknowledge if we are ever going to make any sort of progress. And, I don’t think everyone necessarily needs to have the same premises, or agree with the ones that are generally deemed “correct.” But it’s important to understand the facts and frameworks in which oppressed peoples are operating and work from there.

The Daily Gazette is Swarthmore’s daily newspaper. The Gazette is sent out every work-day to more than 2,500 people, and has thousands of readers from across the world. The Daily Gazette was organized during Fall semester 1996 by Sam Schulhofer-Wohl ’98. The goal: to provide timely coverage of campus news and Garnet sports while maintaining complete independence from the administration and student government.